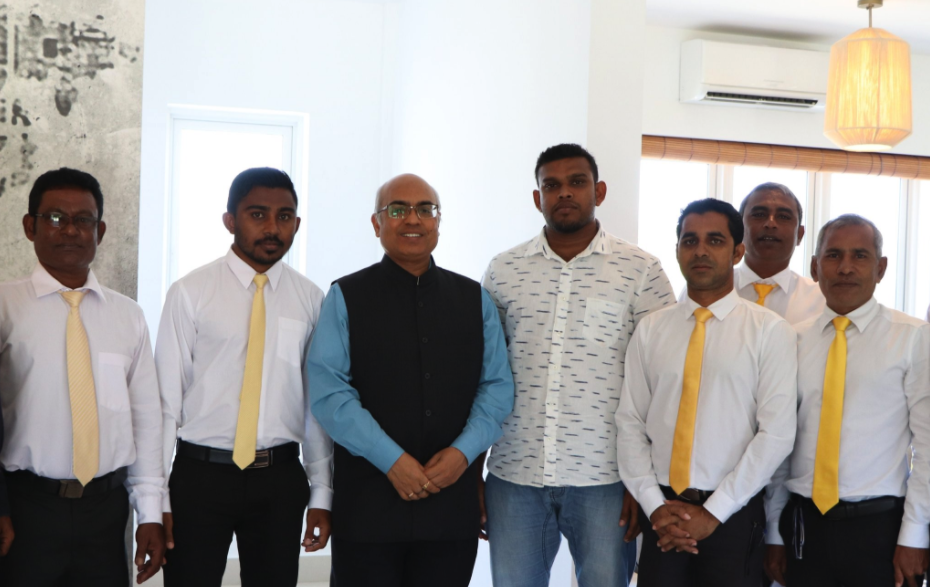 New Delhi: A day after certain new rules were introduced, the Maldives government suspended three members of a local body on charges of meeting with the Indian ambassador, Akhilesh Mishra, without seeking prior permission. Meanwhile, India said on Thursday that New Delhi remains committed to supporting “democracy, development and stability” in the Indian Ocean nation and reminded Maldives about its “India First’ policy.

On December 11, the central oversight body Local Government Authority (LGA) issued a circular saying that since all foreign policy powers are vested in the presidency, any meetings between councillors and foreign diplomats could only take place after a green light from the home ministry.

At the time when the circular was issued, Mishra was touring the islands of Gaafu Alifu atoll, one of the two administration divisions in the second largest natural atoll in the Maldives, Huvadhoo.

A day later, president of the Gaafu Alif Atoll Council, Ahmed Fuaad, tweeted a photo of the LGA notice dated December 12. This was the notice that suspended the entire three-member council, which comprised of Fuaad and two other councillors, Ahmed Nazmeen and Hussain Adam, for three months.

Fuaad had tweeted a photo on the morning of December 11, picturing the welcome the councillors gave the senior Indian diplomat. That same evening, he posted the LGA circular. Three hours later, he posted a picture of dinner with Mishra and the councillors.

A letter from the LGA the next day said that the Atoll Council met with a foreign diplomat even after the LGA had cautioned them against doing so without written permission from the capital. There was no mention of Mishra by name, but the implication was unmistakable.

The Maldives Independent quoted Fuaad as denying that the meeting with Mishra took place after the circular was issued. “We were having dinner with the Indian Ambassador Akhilesh Mishra around the time LGA issued the circular. We received a copy of the circular more than half an hour after the dinner meeting,” he said.

All three suspended councillors belonged to the principal opposition party, Maldivian Democratic Party (MDP). That all of them are from the opposition party is not surprising, as the MDP had won 46% of the seats in local bodies in the May 2017 elections, compared to just 26% won by the ruling Progressive Party of Maldives. This percentage was even higher for the posts of councillors in Atoll Councils, with MDP grabbing 61% of 67 seats that put it in charge of 11 Atoll councils.

The local government system in Maldives includes three city councils for Male, Addu and Fuvahmulah. The rest of the country are administered by a two-tier system – a cluster of island councils is supervised by an Atoll Council.

Till now, foreign diplomats – both resident and non-resident – did not face many hurdles in travelling around the Maldives. In most countries, meeting leaders and travelling across the country is a part of diplomatic practice.

The LGA circular cited clause 115 (J) of the Maldivian constitution, which vests the office of the president with the power to “determine, conduct and oversee the foreign policy of the country, and to conduct political relations with foreign nations and international organizations”.

The authority argued that if councillors continued to meet foreign representatives, “Maldives risks losing the look of a unitary state as stipulated in the constitution and this would negatively affect Maldives foreign and domestic policy with implications on international treaties signed by the Maldives”.

At the time when the circular was issued, British ambassador to Maldives James Dauris was also visiting the Gaafu Dhalu atoll, which is the administrative division adjacent to Gaafu Alif.

After learning about the new LGA circular, Dauris tweeted on Monday that this was the latest in a number of “unfortunate steps” taken by the government. The Maldivian government has come under criticism from Western capitals for actions taken in parliament to disqualify MPs who had defected from the ruling party.

Since I met elected island representatives on Thinadhoo earlier today, all local councillors have been instructed that they may only meet diplomats and NGOs with prior permission.

The Australian envoy to Maldives Bryce Hutchesson questioned the need for this step on his Twitter account, with the hashtag ‘freedom of expression’.

German envoy to the Maldives Joern Rohde termed the new rules as evidence of continuing “deterioration in democracy and freedoms” in the country.

On Oct 5 the EU Parliament urged the MAL Gvt to respect “the right to protest, freedom of expression, association and assembly, and freedom of conscience and belief…” Now with local councilors being allowed to meet foreign diplomats only after permission from Home Ministry…

The deterioration in democracy and freedoms continues. Why does the MAL Gvt mistrust it’s own people so much? Very concerning.

There was a similar statement from US ambassador Atul Keshap, who described the latest measure as a “further restriction on democracy and transparency” in Maldives.

A further restriction on democracy and transparency in #Maldives: it appears that local elected officials can no longer meet diplomats and civil society NGOs without central government permission. Why? https://t.co/OwktUf4nPj

There was, however, no comment from the Indian embassy.

On Wednesday, suspended councillor Fuaad posted the group photo with the Indian ambassador and defiantly tweeted, “We do not need the permission from anyone to welcome our guests”.

Late at night, Fuaad changed the display picture of his twitter account to one of him shaking the hand of the Indian ambassador.

Mishra has been perhaps the most active among foreign diplomat accredited to the Maldives government as far as his outreach to local officials is concerned. He has been meeting them during his tours or at the Indian embassy  – as is evident from photos posted on his Twitter timeline.

India has rarely public rebuked the Maldives, preferring to convey concerns behind closed doors. However, the invitation extended by an MEA-funded think tank to former president and MDP leader Mohamed Nasheed to visit Delhi in August was seen as a sign of India’s annoyance with President Abdulla Yameen.

India has not been particularly happy with Yameen’s efforts to sideline the opposition, as well as to actively court the Chinese. Yameen recently travelled to China, where Maldives signed its first bilateral free trade agreement on December 7.

A week later, India responded that it had “seen” the reports about the FTA. Ministry of External Affairs spokesperson Raveesh Kumar specifically “alluded to the manner in which the FTA was passed by the Majlis”. He was referring to the sudden manner in which the legislation related to the FTA was pushed through parliament at a special session, which was not attended by the opposition MPs.

“We are yet to see the document, and hence, it will not be appropriate for me to speculate on the contents,” he added.

While India attaches “highest importance” to ties and both countries have strong people-to-people linkages, he also noted that India is also “committed to supporting democracy, development and stability in Maldives”.

Kumar’s mention of ‘democracy’ and ‘stability’ were a hint to the Maldivian government that there had to be a more reconciliatory politically inclusive approach from the Yameen administration.

Even more significantly, the official spokesperson said, “It is our expectation that as a close and friendly neighbour, Maldives will be sensitive to our concerns in keeping with its ‘India First’ policy.”

The highlighted reference to ‘India First’ policy is a reminder from India to Maldives about its commitment to be true to New Delhi’s concerns – an indication that there is doubt about Malé’s adherence to this publicly-stated position.