Lenin Moreno's victory will mean the continuation of his predecessor Rafael Correa's inclusive agenda of development. 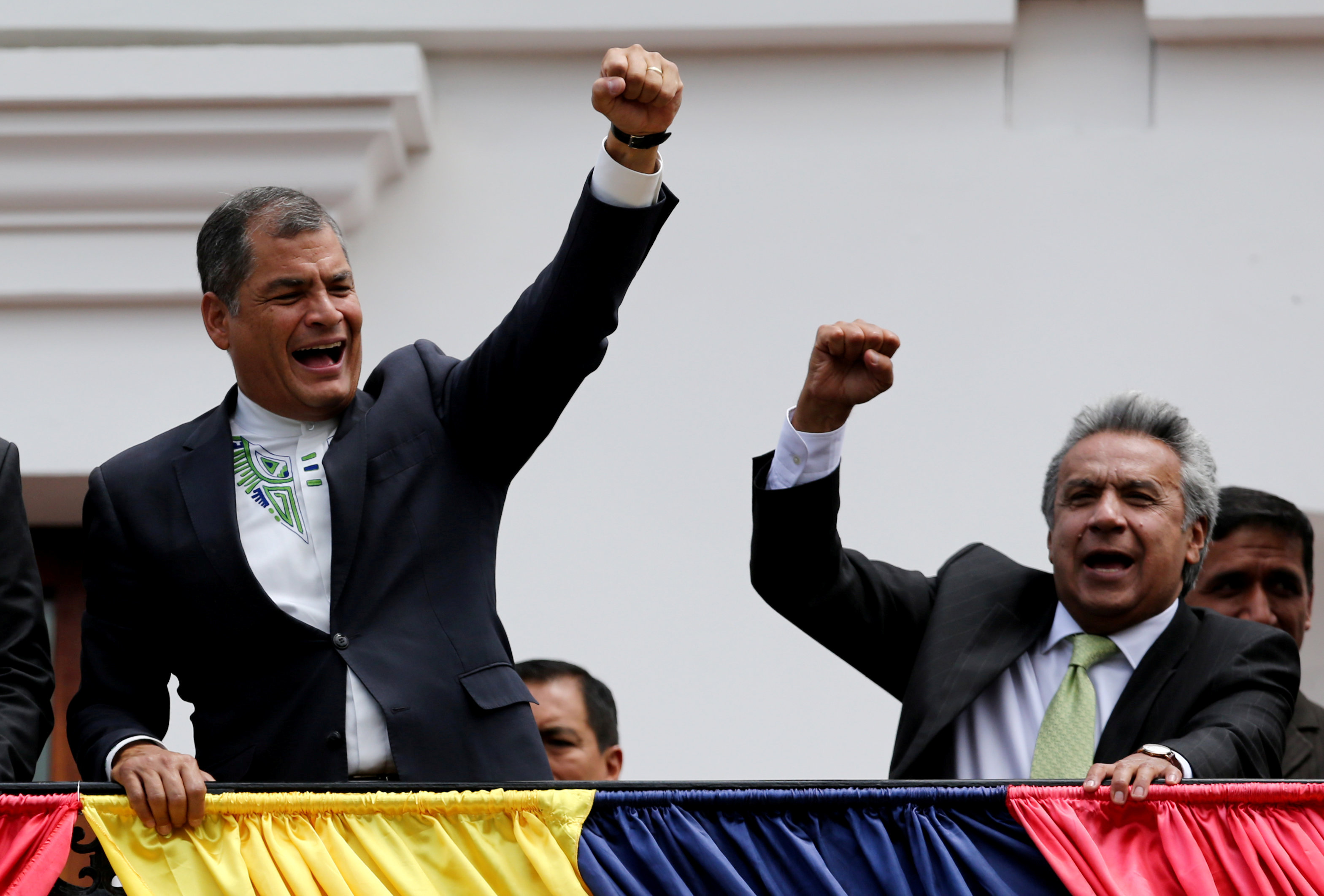 Moreno’s victory is being celebrated by the Latin American Left, which had lost power to the right in Argentina and Peru in recent elections. In Brazil and Paraguay, the rightists have brought down leftist presidents through constitutional coups. There is talk of ‘retreat of the left‘ and ‘fading of the pink tide‘ in the region. Against this background, Moreno’s victory in Ecuador is a moral boost to the Left in the region. Moreno is the hand-picked candidate of leftist President Rafael Correa, who has ruled the country since 2007. The outspoken Correa is known for his fierce crusade against neoliberalism and Washington Consensus. He had refused to sign a FTA with the US, pulling out of the negotiations even when neighbours Colombia and Peru went ahead. He closed the US airbase in Ecuador when the lease expired in 2009. In a bold move, he granted asylum to Wikileaks founder Julian Assange who is wanted by US prosecutors after he had published secret American documents; Assange has been staying at the Ecuadorian embassy in London since June 2012. Lasso threatened to evict Assange if he won the election.

The victory of the Left in Ecuador comes as a relief and brings hope for those frustrated with the recent rise of right-wing extremism in Europe, US and other parts of the world. It should not be forgotten that the Left continues to rule in Bolivia, Chile, Uruguay and Venezuela. Former president Luiz Inácio Lula da Silva is still seen as the frontrunner in Brazil’s next elections in 2018, if he is not banned from running through right-wing conspiracy. The chances of Mexico’s leftist candidate, Andrés Manuel López Obrador, have become brighter in the elections next year as a reaction to US President Donald Trump’s anti-Mexico diatribes.

The credit for the victory of the Left in Ecuador goes to the the exemplary performance of Correa’s government in the last ten years. Correa has pulled the country out of its economic mess of the past when it suffered one crisis after another. He has reduced the poverty rate from 40% in 2006 to 23% in 2016. He has doubled the social spending, improved the living standard, and infrastructure and public services. He has included Ecuador’s indigenous people and other marginalised groups in political and economic development. He achieved all these without stoking inflation, which stood at 1.3% in 2016. Under his government, economic growth increased steadily while unemployment decreased. He redrew the unequal oil and mining contracts of multinational corporations, making them pay more, and using the additional revenue for education and healthcare. Alarmed by the fact that 38% the government revenue went to service external debt, he cut it down by aggressive and compulsory restructuring, and by standing up to IMF, World Bank and the western creditor mafia. While his close friend Hugo Chavez ruined the Venezuelan economy with disastrous policies in the name of ‘twenty first century socialism,’ Correa, who has a masters and PhD in economics from a US university, showed pragmatism. For instance, he continued the policy of his predecessors in keeping the US dollar as the country’s currency as part of economic stabilisation, despite his anti-US rhetoric and his own criticism of dollarisation when it was introduced in 2000.

More importantly, Correa brought political stability to Ecuador, notorious for its chronic instability. The country had seen eight presidents in the ten years before Correa came to power, witnessing military coups and congressional impeachments of presidents in that period. Three of Correa’s predecessors were forced out of office before completing their terms. Correa is the first president elected to serve a third consecutive term in the last 100 years of Ecuador’s history. After his first election in 2006, Correa got a new constitution approved in 2008, under which he won reelection in 2009 and 2013. Correa is leaving the presidency honourably with his head high and a respectable approval rating of 44% after ten years in power. He has announced that he will pursue academic work in Belgium, where he had done university studies and met his wife Anne Malherbe.

Moreno, who had served as vice president during Correa’s first term (2007-13), has promised the continuation of Correa’s inclusive agenda of development. He is more moderate and conciliatory than his sharp-tongued and thin-skinned combative predecessor who was intolerant of criticism. Moreno is a paraplegic since being shot during a robbery in 1998. He had used ‘laughter therapy’ as part of his recovery process and has created a foundation, Eventa, to promote humour and joy as a way of life, authoring numerous books on the subject.

Lasso, who lost narrowly with 48.83% of the vote, as against Moreno’s 51.17 %, is contesting the results claiming irregularities. He has asked his supporters to protest peacefully but forcefully. But he is yet to come out with solid evidence to substantiate his allegations. The external observers sent by the Organisation of American States (OAS) and UNASUR (South American community of states) have not reported any adverse observations on the polls. In fact, the secretary general of OAS has already congratulated Moreno for his victory. It may be noted that Lasso got 10% fewer votes than Moreno’s 39.36% in the first round of elections held in February. His party CREO got just 34 seats while Moreno’s Alliance Pais (Country Alliance) party had won 74 and secured a majority in the 137-member National Assembly in the February elections. Lasso had also lost to Correa in the 2013 presidential election, getting just 22.7% vis-à-vis Correa’s 57%.

Ecuador, a small country with a population of 16.4 million and $100 billion GDP, depends largely on oil exports for its revenue. With the drastic decline in oil prices in the last two years, the country faces problems of budget deficit, foreign exchange shortage and austerity. The GDP growth in 2017 is projected to be just 0.3% after the contraction of 2% in 2016. The country is in deep debt to China, which has given a cumulative credit of $17.4 billion. The Chinese are taking oil against repayment and are dominating in Ecuador’s oil, mining and infrastructure sectors. The excessive dependence on China for credit and investment is the price Correa had to pay in view of the hostile and high-handed approach of Western financial institutions.

India’s trade with Ecuador was $378 million in 2016 (January-December), of which exports were $165 million and imports $213 million. India’s imports have fallen drastically from $987 million in 2014, due to the fall in price of crude, the country’s main import. Ecuador is an OPEC member with an estimated 8 billion barrels of proven reserves and daily production of 540,000 barrels. TCS has implemented a $150 million IT project for Ecuador’s Banco Pichincha, which is one of their largest contracts in the region. India had exported seven Dhruv helicopters to Ecuador but four of them crashed. The delay in amicable resolution of this issue has caused some strain in bilateral relations. In spite of this, Ecuador is keen to strengthen trade with India and attract Indian investment. It had sent a large business and government delegation, led by the vice president, to the Indo-LAC Business Conclave in December 2013. PetroEcuador has signed a MOU with ONGC Videsh Ltd for cooperation in hydrocarbons. Ecuador has established a consulate in Mumbai besides an embassy in New Delhi. This is noteworthy given that Brazil and Argentina are the only other Latin American countries with consulates in Mumbai.

It is time for India to consider opening an embassy in Quito. Ecuador is more important than Iceland, where India has an embassy for unknown reasons. India’s exports to Iceland are less than $20 million and imports below $5 million. After all, the cold and barren Iceland, with a tiny population of 330,000 and an insignificant GDP, does not have oil, minerals or opportunities like Ecuador does.