While the External Affairs Minister said the oxygen was “unsolicited”, his Ministry warned against "hoarding". 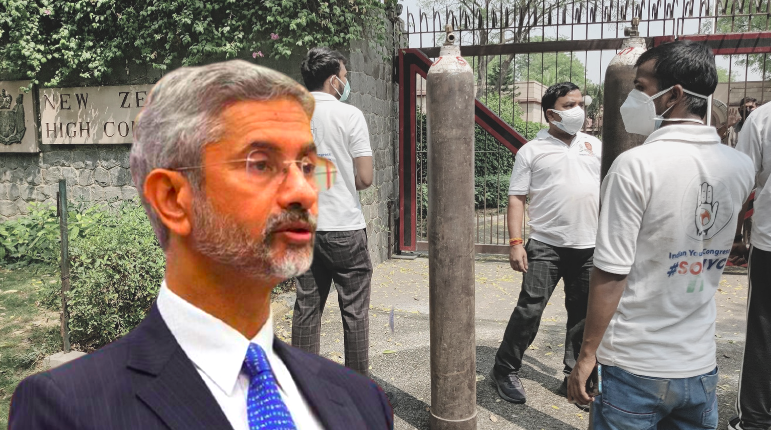 External Affairs minister S. Jaishankar. On the background is an image of IYC members at the NZ high commission in Delhi, tweeted by Srinivas BV.

New Delhi: Twitter played witness to a high-level public spat after it emerged that members of the opposition Congress had supplied oxygen cylinders to foreign missions, following an SOS cry by the latter.

This led External Affairs Minister S. Jaishankar to lash out that the oxygen was “unsolicited” and the Congress’s announcement an attempt at “fake publicity”.

The MEA also stepped into the fray by stating that “all are urged not to hoard essential supplies, including oxygen”.

On Saturday, Indian Youth Congress chief Srinivas B.V. tweeted a video at around 7.57 pm. It showed two cylinders being delivered to the Filipino embassy premises. Someone from within the embassy says ‘yes’ when asked by the IYC workers if there were two patients inside.

This led former minister and Congress leader Jairam Ramesh to ask on Twitter whether MEA was “sleeping” if the “youth wing of the opposition party is attending to SOS calls from foreign embassies”.

On Sunday, Jaishankar tweeted that MEA had checked with the Philippines embassy that the supply was “unsolicited” as they had “no Covid cases”.

“Clearly for cheap publicity by you know who. Giving away cylinders like this when there are people in desperate need of oxygen is simply appalling,” he tweeted.

Jairamji, MEA never sleeps; our people know across the world. MEA also never fakes; we know who does.

In a follow-up tweet, he added, “Jairamji, MEA never sleeps; our people know across the world. MEA also never fakes; we know who does”.

Within a minute after Jaishankar’s tweet, the Twitter account of the New Zealand High Commission had directly tweeted to the IYC chief asking whether an oxygen cylinder could be “urgently” delivered to their premises.

The original tweet by New Zealand High Commission was deleted, but Srinivas’s reply is still there. Several Twitter users also posted screenshots of the tweet later. 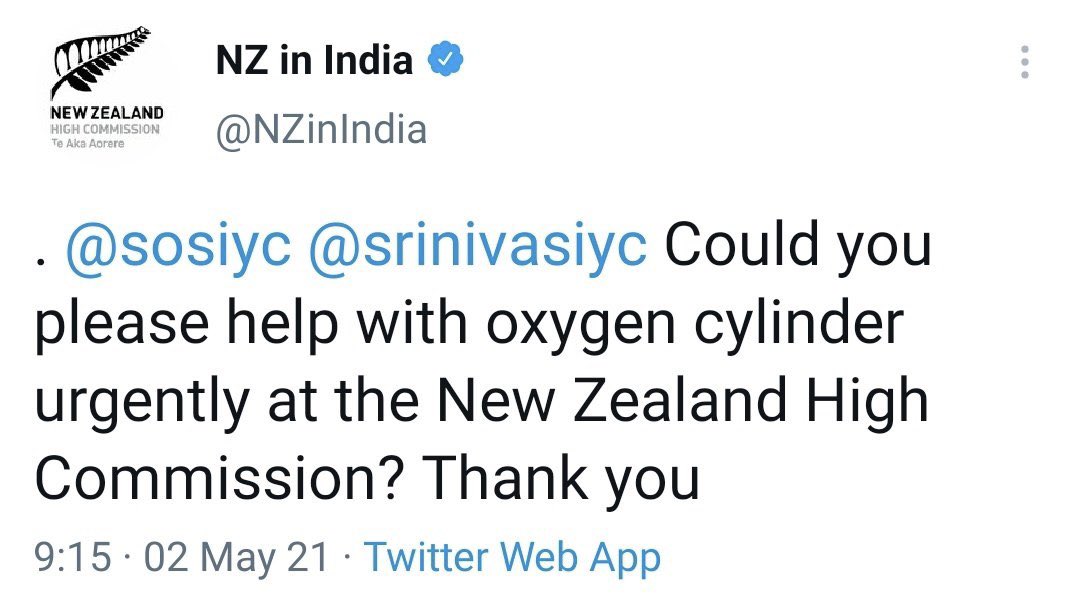 Around 45 minutes later, the high commission posted a fresh tweet: “We are trying all sources to arrange for oxygen cylinders urgently and our appeal has unfortunately been misinterpreted, for which we are sorry”.

We are trying all sources to arrange for oxygen cylinders urgently and our appeal has unfortunately been misinterpreted, for which we are sorry.

The IYC chief then posted a video showing their workers taking a cylinder through the gates of the high commission.

Also, they thanked the #SOSIYC team for this quick relief as patient inside embassy was critically ill. pic.twitter.com/vu6TUhD1r8

Meanwhile, the Indian Youth Congress posted screenshots of the alleged SMS conversation with a contact in the Philippines embassy that led to the oxygen delivery. There was also a screenshot of call records, as well as a Facebook post.

The Ministry of External Affairs spokesperson Arindam Bagchi, meanwhile, issued a statement that the Chief of Protocol and Heads of Divisions were in continuous touch with all High Commissions and Embassies. He noted that MEA responds to all their medical demands, especially those related to COVID-19, which includes facilitating hospital treatment.

“Given the pandemic situation, all are urged not to hoard essential supplies, including oxygen,” he added.

It is learnt that both the Philippines and New Zealand missions had not approached the MEA to get an oxygen cylinder before posting on their social media accounts. Their mission heads apologised for the social media posts, which they told the MEA, had not been authorised. The ministry was told that while there was no one who was ill in the Filipino mission, there was a COVID-19 positive patient in the New Zealand high commission. However, the patient was apparently not critical, MEA was reportedly informed.

To the reference to “hoarding” in the EAM’s tweet and MEA statement, officials claimed that it was not directed at foreign missions but at the Youth Congress workers.

Delhi has been reeling from a severe oxygen shortage, with COVID-19 patients in hospitals dying after the supply for the essential life-shaving gas ran out.

On Friday, the Delhi high court told the Central government that “enough was enough” after it emerged that Delhi’s allocated quota of oxygen was not fulfilled on any of the days during the current devastating second wave of COVID-19.

ICU beds in hospitals and other medical supplies have seen a similar crunch.

More than 150 cases have been reported in the Ministry of External Affairs as well. Senior MEA officials had to look beyond the border of Delhi in Haryana and Rajasthan to search for beds for themselves and their family members.

Aware of the seriousness of the situation in Delhi, most foreign missions have been trying to prepare contingency plans on their own.

Some of the larger missions, like the United States and China, have full-fledged medical centres within their large embassy compounds. CNN had reported last week that at least 100 were infected and two died in a COVID-19 outbreak among the US diplomatic staff in India.

Many of the middle-sized embassies had approached hospitals to “reserve” beds. But the extent of the crisis in Delhi made this difficult.

Speaking to The Wire, an ambassador who did not want to be identified, said given the situation, it was problematic “to reserve beds for foreigners”.

But, he suggested that MEA open a cell to “provide the best and most up-to-date information on where to go for oxygen and beds”.

Other embassies are considering procurement of medical equipment to set up a home ICU system with oxygen cylinders as the last resort. However, even this proposal is a challenging one to implement given the shortage.

Some foreign diplomats that The Wire spoke with are also looking at evacuation if there is a medical case and sending staff back home.

On Saturday, official sources said that Thailand had delivered 30 oxygen concentrators in a Royal Thai Force flight that had arrived to evacuate Thai embassy officials.