In Run up to Election, Banners of Modi-Netanyahu Make an Appearance in Israel

Along with US president Donald Trump and Russian president Vladimir Putin, Modi is part of Netanyahu's election campaign to showcase his close relationships with world leaders.

Narendra Modi being received by Benjamin Netanyahu, on his arrival in Tel Aviv, Israel in 2017. Credit: PTI

Along with US president Donald Trump and Russian president Vladimir Putin, Modi is part of Netanyahu’s election campaign to showcase his close relationships with world leaders. Netanyahu’s intention is to burnish his national security credentials and project himself as the only Israeli leader who has personal rapport with certain world leaders. 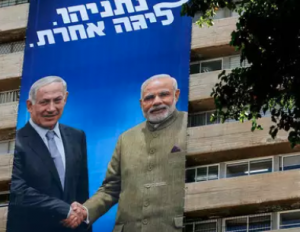 The text on the top of the banner reads in Hebrew, “Netanyahu. A different league.”

Modi, Putin and Trump also feature in a campaign video which shows Netanyahu meeting the world leaders on different occasions.

Israel is scheduled to hold elections on September 17 to elect 120 members to the 22nd Knesset.

Chairman of the right-wing political party, the Likud-National Liberal Movement, Netanyahu became the longest-serving prime minister in Israeli history earlier this month.. He won 35 seats in the April general elections, which was exactly the same as his rival centrist opposition, Blue and White. Seven weeks after the polls, Netanyahu had to admit defeat in forming a coalition as he failed to get a majority in parliament by one vote. Instead of allowing his rival, Blue and White to have the chance to form a government, he triggered the dissolution of parliament.

According to opinion polls, Netanyahu’s party may get less seats than the April election. The “balance of power” would again be held by Avigdor Lieberman, head of a secular ultra-nationalist party, who had refused to support Netanyahu due to conflict over a bill that would increase the quota of ultra-orthodox men in military service.

Anshel Pfeffer, a columnist in the Haaretz newspaper, wrote on Sunday that the pivot in the Likud campaign from running negative ads against opponents to a positive message about statesmanship was an intriguing one.

He stated that Netanyahu’s biggest problem for the September polls was that “he has too many targets”. “For his entire career, he has motivated people to vote through fear and hatred of left-wingers and Arabs. It is one thing to make them hate Barak and Gantz for being in bed with Israel’s enemies. But to get them to simultaneously also hate Shaked and Lieberman, who are if anything worse racists, is beyond the scope of his campaign,” wrote Pfeffer.

He pointed out that Netanyahu’s foreign relations had been a small part of the previous election campaign – but had been expanded “at least until they figure out who the best target is for a negative campaign that they feel so much more at home with”. In his article, he described Modi as one”whose party has incited anti-Muslim racism in India on a level Trump has yet to even dream of”.

Pfeffer also found it interesting that Netanyahu had put both Putin and Modi on the same level as Trump, even though both India and Russia have close relations with Iran. “But Netanyahu’s team is broadcasting that Trump is no longer enough and Israel also needs the protection of India, one of Iran’s main trading partners, and Russia, which supplies Iran with most of its weapons systems. Netanyahu is convinced Israeli voters don’t know and don’t care”.

Netanyahu is also scheduled to visit Modi in New Delhi on September 9 for a day-long visit, to demonstrate his international clout. He also attempted to visit India before the April 9 elections, but failed to do so due to scheduling issues as Modi was also on a re-election campaign.

Modi and Netanyahu have shared a close “bromance” since Modi’s 2014 election. Modi visited Israel in 2017, and was welcomed with Netanyahu’s words, “Prime Minister Modi, we have been waiting for you for a long time, almost 70 years… We view you as a kindred spirit.”.

Modi was the first Indian prime minister to visit Israel since the establishment of formal diplomatic relations in 1992.

He is the first Indian prime minister to visit the Jewish state. Netanyahu not only received him at the airport, but was also the first prime minister to congratulate him on his Lok Sabha victory, promising to foster bilateral relations with India and a “great friendship”.

Later in January 2018, Netanyahu made a reciprocal trip to India – the first by an Israeli prime minister in 15 years.

Israel is currently India’s second largest foreign supplier of defence equipment after Russia. While relations with Israel, including for security cooperation, had been maintained by all Indian governments since 1992, Modi’s advent has meant a visible upgrade in profile of ties, which had previously remained in the shadows.