Indonesia's Balancing Act: A Road With China, a Port With India

The main thrust of Modi’s upcoming visit to Indonesia will be to demonstrate that both countries are close maritime neighbours. 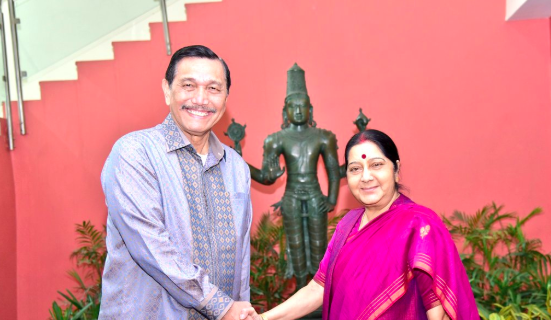 New Delhi: When Indian Prime Minister Narendra Modi travels to Indonesia later this month, his first stop was supposed to be the port of Sabang, where he was to inaugurate a hospital and port development facilities, said Indonesian coordinating minister for maritime affairs Luhut Pandjaitan.

In a lecture at the Nehru Memorial Museum and Library, Pandjaitan said India’s role in developing Sabang, a port city in the Aceh province, would ensure a bit of a balance in the South China Sea.

“This is my personal view. When your prime minister is in Sabang, you can give a balance of power… Prime Minister Modi’s plan is to open a hospital and have a sea port. The sea port there is very deep, with 25 metres depth,” he said to the audience on Thursday (May 17).

There were initially plans to have Modi travel at least some distance to Sabang on a ship to visually depict maritime neighbourliness. He would have been following in the footsteps of India’s first prime minister, Jawaharlal Nehru, who travelled to Indonesia on INS Delhi in June 1950.

However, a senior member of the Indonesian delegation told The Wire that due to bad weather, Modi’s ship journey may have to be cancelled. A ship visit by an head of government would also have been a logistical nightmare, therefore Sabang was taken off the schedule.

Modi will be travelling to Indonesia on May 29 for a three-day visit, which will start in Jakarta.

In the run-up to the visit, Pandjaitan, who is a strongman in Indonesian politics, is in Delhi to hold talks with national security advisor Ajit Doval, external affairs minister Sushma Swaraj and other Indian cabinet ministers.

He said that Indonesia would like to see more investment in the Sabang port free trade zone.

It is learnt that the main thrust of Modi’s visit to Indonesia will be to demonstrate that both countries are actually close maritime neighbours. The shortest distance between the Andaman Islands and Aceh is just 80 nautical miles.

H.E. Mr. @LuhutPandjaitan delivers a very enlightening Public Lecture on “Indonesia’s Maritime Policy & Thinking of Ways Forward for India-Indonesia as Maritime Neighbours” in #NewDelhi. We can do many things together to develop a closer relationship between two countries. pic.twitter.com/MEGR5ricx5

In 2016, there were clashes in the waters near the Natuna islands. These waters are claimed by both China and Indonesia. A year later, Jakarta renamed the contested waters the North Natuna Sea, and has been fortifying military facilities in nearby islands.

During the question and answer, Pandjaitan was asked specifically about Indonesia’s position on the reported deployment of Chinese missiles in the South China Sea. Dodging the question, he replied that Indonesia has “tried very carefully to respond” on this issue.

He said that it was important to “carefully engage (on) this one in order to avoid any conflict among ASEAN members”. He noted that countries like Myanmar and Cambodia had a difference of opinion with respect to China’s actions.

Indonesia’s response to the July 2016 ruling of the Permanent Court of Arbitration had been to call on all parties to exercise restraint, to not take steps to escalate tensions and to respect the 1982 United Nations Convention on the Law of the Sea. However, the Indonesian official statement did not make any reference to the ruling.

Pandjaitan said that he had once asked his Chinese counterpart about the basis of their Nine-Dash Line claim. “They said three things. Number one, historical, number two, because of sentiments from the mainland and number three, because of Admiral Zheng He. If you talk of sentiment, then Krakatoa and Tambora (volcanic) explosion 200-300 years ago also threw up a lot of ash around the globe. Then I can claim parts of Asia, Beijing and New York.”

He also added that the ideal way to manage tensions with China is not to go before the media. “If we have a problem, we contact (each other) and solve them. It is a better solution to minimise tension… We honour their sovereignty, but you have to also discuss our sovereignty,” he said.

When asked about Indonesia’s position on the Belt and Road Initiative, he said, “We don’t want to be controlled by the Belt and Road…We are also promoting our Global Maritime Fulcrum…It is to balance the One Belt, One Road.”

A former military officer, Pandjaitan admitted that Indonesia, despite being an archipelagic nation, had taken the maritime domain for granted. “We rely on the army. We didn’t rely on the sea. We didn’t think of the ocean. When we thought of the navy, it was just okay lah…We had forgotten that Indonesia is brought together due to the sea, due to UNCLOS”.

The Global Maritime Fulcrum (GMF) doctrine was launched by Indonesian President Joko Widodo in November 2014, to re-orient his country as an active player “in determining the future of the Pacific and Indian Ocean region (PACINDO)”.

He said that the GMF’s ‘balancing’ with OBOR was to ensure that Indonesia remained non-aligned. “We would like to be independent. We are too big to be leaning one way or the other,” he said.

Incidentally, Pandjaitan is also the Indonesian president’s special envoy to to establish strategic cooperation with China. Following a visit to China in April, he issued a statement that five cooperation contracts worth $23.3 billion had been signed under the Belt and Road Initiative. These include two hydropower projects, one power plant and a steel smelter.

“The two sides are pleased to witness the increasing infrastructure connectivity development cooperation in recent years reflected by the ongoing construction of the Jakarta-Bandung High Speed Railway Project and the discussion on the planned joint development of the Regional Comprehensive Economic Corridor within the Belt and Road Initiative cooperation and the Global Maritime Fulcrum framework. Both sides are determined to step up efforts to push forward the success of said projects,” said the Indonesian-Chinese joint statement.

Li also agreed to increase palm oil imports from Indonesia by over 500,000 tonnes per year. The export of palm oil was an area where New Delhi had an advantage over Beijing, as New Delhi is the largest exporter of Indonesian palm oil, followed by the EU and China.

However, India had increased the levies and duties on palm oil in November last year. This was raised by the Widodo during his visit to India in January 2017. The Indian side had asked Indonesia to revert if there was any drop in trade. Till now, Indian demand for palm oil has been increasing. However, an Indonesian official explained that this was largely due to the Indian festive season.

Pandjaitan underlined the political importance of palm oil exports, stating that it is necessary to reduce poverty, which is a priority for the Indonesian government.

Note: This story was updated after sources told The Wire that Sabang no longer features on the prime minister’s itinerary.