At 2+2 Dialogue, India to Tell US Why It's Tough to 'Go to Zero' on Iran Oil Imports

From key defence agreements to US's South Asia policy and its Indo-Pacific strategy, the forthcoming India-US 2+2 dialogue is set to be important in more ways than one. 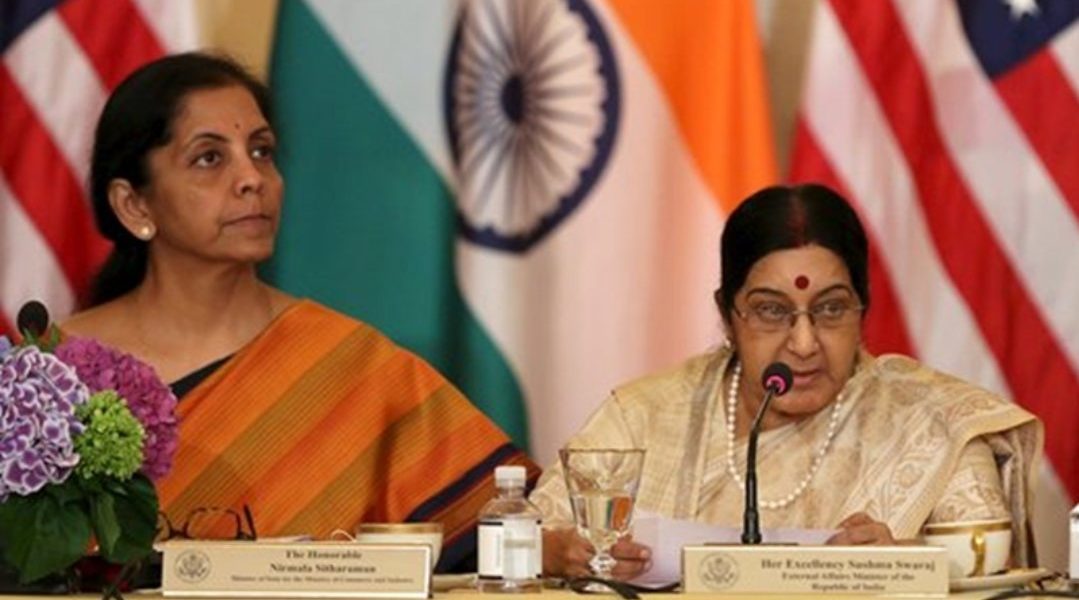 India will be represented by external affairs minister Sushma Swaraj and defence minister Nirmala Sitharaman at the 2+2 Dialogue. Credit: Reuters

New Delhi: The Indian side hopes that the Trump administration will keep in mind the Indo-US strategic relationship while taking a call on whether to exercise its waiver authority on Russia-related sanctions that may hurt India, even as New Delhi plans to “sensitise” the US to the fact that finding an alternate to Iranian oil would be a tough task for a country that is so import-reliant when it comes to hydrocarbon needs.

The first 2+2 dialogue between India and the US is set to be held here on September 6. India will be represented by external affairs minister Sushma Swaraj and defence minister Nirmala Sitharaman, while the US bench will be led by secretary of state Mike Pompeo and defence secretary James Mattis.

In the run-up to the talks, there have been intense negotiations between the two sides to find a way around the iceberg known as the Countering America’s Adversaries Through Sanctions Act, or CAATSA.

The US legislation, passed by Congress and signed by President Donald Trump in August 2017, penalises any country which conducts “significant transactions” in the defence and intelligence sectors with Russia.

India’s discussion with Russia for the S-400 air defence system predates CAATSA, but the deal came under the spotlight after Washington became increasingly alarmed over Russia’s ‘interference’ in its 2016 presidential elections.

At a recent public event in Washington, Randall G. Schriver, assistant secretary of defence for Asian and Pacific security affairs, said media reports that a waiver was imminent for India were “misleading”. “We would still have very significant concerns if India pursued major new platforms and systems (from Russia),” he said on August 30.

Schriver had also claimed that “China and how to respond to it will be front and centre” at the 2+2 discussions.

With one day left for the dialogue, sources in New Delhi said that it was “not normal practice for India to discuss our relationship with third countries in our bilateral dialogues”. Indian officials have repeatedly stated that India’s purchase of S-400 surface to air missile systems is a bilateral issue between New Delhi and Moscow.

The sources said that the threat of sanctions on the purchase of Russian arms will not be raised unilaterally by India: “It is not on our agenda.”

There is, however, no doubt that the issue will be discussed on Thursday, with India clearly indicating that any imposition of US sanctions against New Delhi for the S-400 purchase would impact the relationship.

From the Indian side, only the Americans can find a solution to the current conundrum which has evolved due to US legislation.

“CATSAA is a US law. It is a law enacted by the US Congress on which the US administration has got a waiver for flexibility on its own deals with other countries. How that waiver applies to any country or project is a matter for the US to decide.. However, our hope is that the US will keep in mind the strategic relationship it enjoys with each country while handling the matter,” the sources stated.

Meanwhile, a former US state department official speaking on condition of anonymity, said that the US would have to consider how a waiver for India could set a precedent. He also warned against underestimating the level of suspicion against Russia across the political spectrum in Washington.

Turkey also has a S-400 deal with Russia, but US-Turkish relations have taken a nosedive in recent months.

India’s public position is that this is a strictly US-made dilemma. “This is a matter of the US administration to take a call and exercise that waiver based on consideration of its relationship with other countries,” the sources reiterated.

Besides Russia, the Trump administration has another bug bear – Iran. With Washington conveying its determination to press for sanctions on the purchase of Iranian oil, US officials had stated that this would be another area for negotiations with India.

In July, the US had sent an official delegation to India to hold talks on the issue of implementing US sanctions against Tehran that were announced after Washington withdrew from the Iran nuclear deal.

US officials have publicly insisted that all countries have to halt imports of Iranian crude and “go to zero” by November 4 – or face sanctions.

During the 2+2 meeting, India will “sensitise” senior US officials that it is a heavily import-reliant country, with 83% of its energy requirements bought from foreign sources. Oil from Iran accounts for about a quarter of India’s crude imports.

“What are the alternatives?… And what is the price that it will be available as it does have an impact on growth,” the sources stated. They also pointed out re-jigging Indian refineries to process non-Iranian crude would require considerable time and money.

India is currently in talks with other countries stuck in a similar situation, with discussions revolving around alternate payment mechanisms.

India’s position has been that while Iran shouldn’t develop nuclear weapons, it should have access to the peaceful uses of nuclear energy. “Our view remains that we support UNSC resolution 2231, but if there are any issues with the JCPOA, it is for the parties in the JCPOA to work it out,” sources stated.

The Iran nuclear deal, which is also known by its acronym – Joint Comprehensive Plan of Action – is supported by UN Security Council resolution 2231 adopted in July 2015.

Stating that the time to take a decision on reducing oil imports from Iran has “still not arrived”, the sources said, “At the end of the day, the decision has to be made independently by government of India… not under any compulsion from the US or Iran”.

India’s development of Chabahar Port is a ‘sub-set’ of the Iran sanctions issue. New Delhi has framed the Chabahar project as a gateway to developing economic and humanitarian channels to Afghanistan, which Indian officials believe is appreciated in the US.

When the US permanent representative to UN, Nikki Haley was in Delhi this June, she conceded “logistics…come into play with Iran” with regard to Chabahar Port.

The burgeoning US defence relationship

With the defence chiefs taking part in the dialogue, the burgeoning US defence relationship will also figure prominently in the 2+2.

The Indian government is pleased with the recent Strategic Trade Authorisation-1 (STA-1) designation by the US Bureau of Industry and Security, which would allow for automatic approval for 90% of export of dual use items .

Two years ago, India and the US signed the Logistics Exchange Memorandum of Agreement (LEMOA), which laid out the protocol for both countries to use each other’s bases on a reciprocal basis.

Government lawyers from both sides have been negotiating the text of the second “foundational“ agreement, the Communications Compatibility and Security Agreement (COMCASA), which would allow for US communication equipment to be transferred to India, thereby increasing the level of interoperability between the two militaries.

However, Indian sources were circumspect that COMCASA would actually be signed on Thursday. “Some of the enabling instruments are in discussion…some stock-taking will take place”.

Under bilateral issues, the recent tariffs imposed on Indian steel and aluminium would be on the agenda. Sources point out that there is “not much appreciation” in Washington that the US-India trade deficit has fallen by 5% last year.

Indian officials also point out that New Delhi has been recently importing US oil and gas, which has also directly reduced the deficit. “We would like the US to acknowledge this.”

Under the rubric of regional issues, the Indo-Pacific will get some attention. “We have not heard directly from either (Mattis or Pompeo) of them, so it will interesting to get their views on the Indo-Pacific,” said official sources.

Clarifying India’s position on the four-nation Quadilateral talks, the sources said that the concept of the ‘Quad’ should not be misunderstood. “Quadrilateral should not be seen as the great strategic game plan that we have…. It is one of many mechanisms in the Indo-Pacific”.

Since Mike Pompeo will be travelling to India via Pakistan, Indian officials also hope to get his assessment of the new Pakistan government. The US announced on Monday that it has decided to cancel $300 million in coalition support funds to Pakistan for not taking required action against militant groups.

Official sources noted that the 2+2 dialogue – which the US only has with a limited number of countries – should not raise anxiety in either Moscow or Beijing.  “We have independent relationships with all of them. We don’t think the 2+2 will have a significant impact on our relationships with Russia and China… We are not doing anything with the US that other countries are not doing”.