Indo-Pacific Region Not a Club of Limited Members: Modi

Speaking at the Shangri-La Dialogue forum in Singapore, the Indian prime minister also assured that ASEAN will not be sidelined in the emerging concept of the Indo-Pacific. 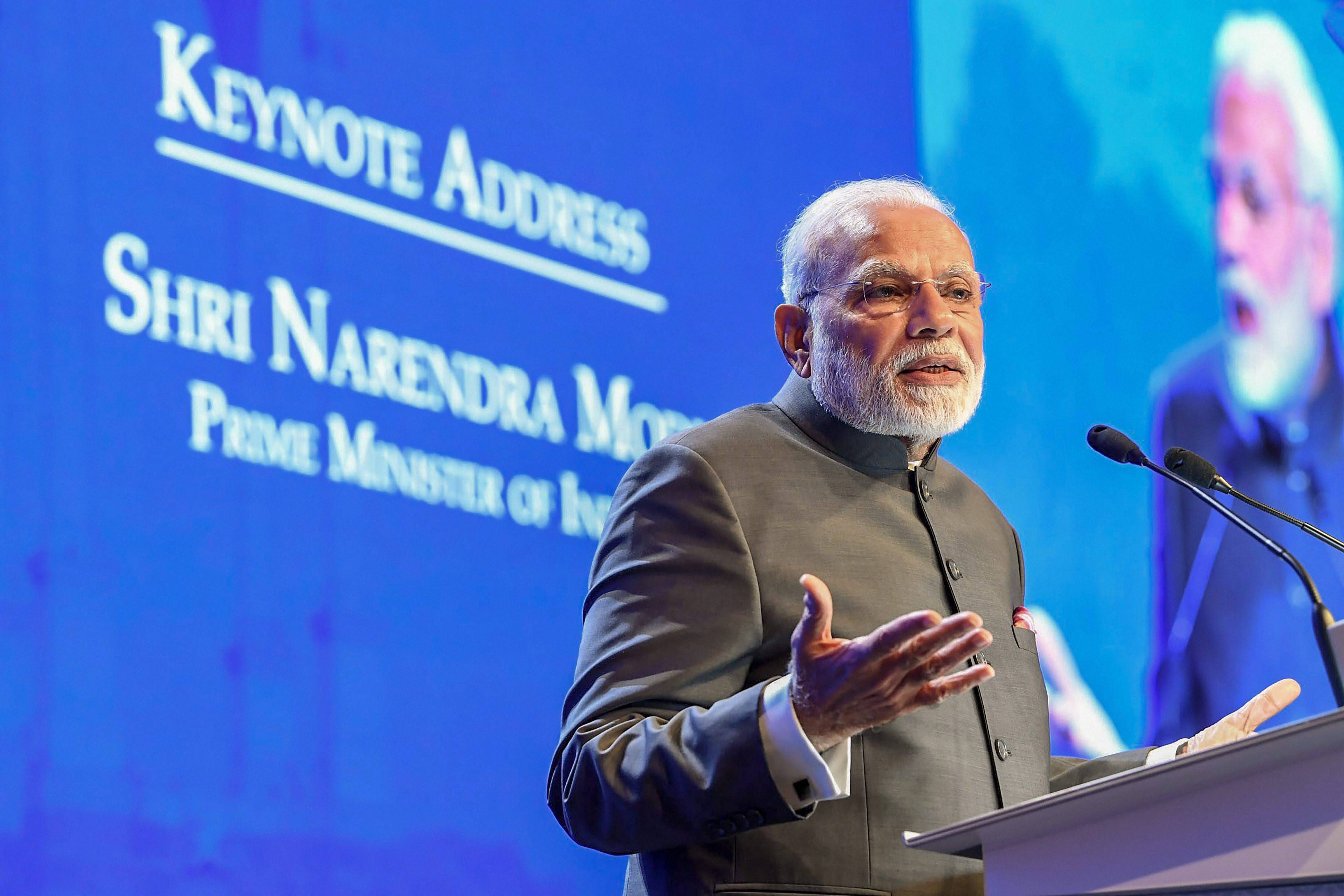 New Delhi: India will promote a democratic and rules-based international order in the Indo-Pacific with ASEAN at its heart, that allows free access to common spaces and is not limited to a ‘club of limited members’, Prime Minister Narendra Modi said on Friday.

The Indian leader delivered the inaugural keynote address of the Shangri-La Dialogue, which is Asia’s premier security conference with participation from a phalanx of defence ministers and senior military officers. The audience included the Singaporean Prime Minister Lee Hsien Loong and the US secretary of defence Jim Mattis – the latter having just re-christened the US Pacific Command as the Indo-Pacific command (Indopacom) just days ago on May 30.

Stating that India was defined by the oceanic sphere, Modi noted that Indians have been a familiar face in Southeast Asia for hundreds of years. On recent engagements, he pointed out that India had hosted the leaders of all ten ASEAN members for the ASEAN-India commemorative summit and annual Republic Day parade.

For a large portion of his speech, Modi sought to reassure Southeast Asian countries that ASEAN will not be sidelined in the emerging concept of the Indo-Pacific, defined as stretching “from the shores of Africa to that of the Americas”.

Earlier last month, Singaporean foreign minister Vivian Balakrishnan had pointed out that the idea of the Indo-Pacific was not well-developed enough for other countries to buy-in into the strategic concept.

Addressing this regional scepticism, Modi referred to the Southeast Asian bloc over 20 times in his 35-minute speech.

“The ten countries of Southeast Asia connect the two great oceans in both the geographical and civilisational sense. Inclusiveness, openness and ASEAN centrality and unity, therefore, lie at the heart of the new Indo-Pacific,” he said.

While ASEAN centrality has been talked about by India several times, this was the first time that ASEAN unity was also spotlighted by the South Asian nation. There has been some fraying in unity between the members of the regional bloc over differences in approach to dealing with China on the South China Sea dispute.

“ASEAN unity is essential for a stable future for this region. And each of us must support it, not weaken it,” he said.

Nudging the bloc to take ownership of the concept, the Indian PM asserted that ASEAN has already “laid the foundation of the Indo-Pacific region”. “The East Asia Summit and the Regional Comprehensive Economic Partnership – two important initiatives of ASEAN – embrace this geography,” he said.

The Indian prime minister also implicitly assured that the so-called ‘Quad’ of Japan, Australia, US and India – whose officials met last November – will not be the custodian of the Indo-Pacific.

“India does not see the Indo-Pacific region as a strategy or as a club of limited members. Nor as a grouping that seeks to dominate. And by no means do we consider it as directed against any country,” said Modi.

Earlier in his speech, he had also tried to play down the ‘Quad’, without naming it, as being one of only several plurilateral groupings that India is a part of. “With several of our partners, we meet in formats of three or more”.

Cautioning that “Asia of rivalry will hold us all back”, he said that competition must not turn into conflict and differences must not be allowed to become disputes.

“It is normal to have partnerships on the basis of shared values and interests. India, too, has many in the region and beyond. We will work with them, individually or in formats of three or more, for a stable and peaceful region. But our friendships are not alliances of containment,” he asserted.

The Indian prime minister mentioned India’s recent engagements with Russia, US, China, Japan and other major powers to underline the multipolar focus of India’s foreign policy.

Painting a volatile world, he called for a collective response to shore up the shaken foundations of the global order.

“We see growing mutual insecurity and rising military expenditure; internal dislocations turning into external tensions; and new fault lines in trade and competition in the global commons. Above all, we see assertion of power over re-course to international norms. In the midst of all this, there are challenges that touch us all, including the un-ending threat of terrorism and extremism. This is a world of inter-dependent fortunes and failures. And no nation can shape and secure it on its own”.

On India’s response, he said that New Delhi “will promote a democratic and rules-based international order, in which all nations, small and large, thrive as equal and sovereign”.

He added that India “will work with others to keep our seas, space and airways free and open; our nations secure from terrorism, and our cyberspace free from disruption and conflict”.

Committing to keep the Indian economy open, Modi said India will “share our resources, markets and prosperity with our friends and partners”.

The Indian PM delineated at least six elements in India’s “positive” vision for the Indo-Pacific region.

He began by saying the Indo-Pacific should be “free and inclusive” which includes “all nations in this geography as also others beyond who have a stake in it”. This was obviously supporting the continued presence of US as an Asian power.

The second ‘element’ was Asean centrality, followed by the need for a common rules-based order that should apply to “all individually as to the global commons”.

He said that the ‘order’ had to respect sovereignty and territorial integrity, as well as equality of all nations.

“These rules and norms should be based on the consent of all, not on the power of the few. This must be based on faith in dialogue, and not dependence on force. It also means that when nations make international commitments, they must uphold them,” said the Indian leader. The last mention of adhering to international commitments could be a dig at both China and the US.

In an obvious reference to the South China Sea issue, Modi described the fourth component as the right to free access to the global commons on sea and air “that would require freedom of navigation, unimpeded commerce and peaceful settlement of disputes in accordance with international law”.

“When we all agree to live by that code, our sea lanes will be pathways to prosperity and corridors of peace,” he added.

Batting in favour of globalisation, Modi spoked against growing protectionism in goods and services. “We will also support rule-based, open, balanced and stable trade environment in the Indo-Pacific region, which lifts up all nations on the tide of trade and investment,” he said.

At the same time, Modi pointed out to ASEAN that they have to also give something in the negotiations for the Regional Comprehensive Economic Partnership (RCEP). India has been the hold-out in RCEP negotiations, due to concerns over restrictions on services. “RCEP must be comprehensive, as the name suggests, and the principles declared. It must have a balance among trade, investment and services,” he added.

Further, he said that connectivity projects in the region “must promote trade, not strategic competition”.

“There are many connectivity initiatives in the region. If these have to succeed, we must not only build infrastructure, we must also build bridges of trust. And for that, these initiatives must be based on respect for sovereignty and territorial integrity, consultation, good governance, transparency, viability and sustainability. They must empower nations, not place them under impossible debt burden. They must promote trade, not strategic competition.”

This was a reiteration of India’s opposition to the Belt and Road Initiative which was first articulated when New Delhi did not attend the flagship summit in Beijing last year.