The Indian home ministry has announced a new category of e-visa for Afghan citizens due to the situation in the war-ravaged country. 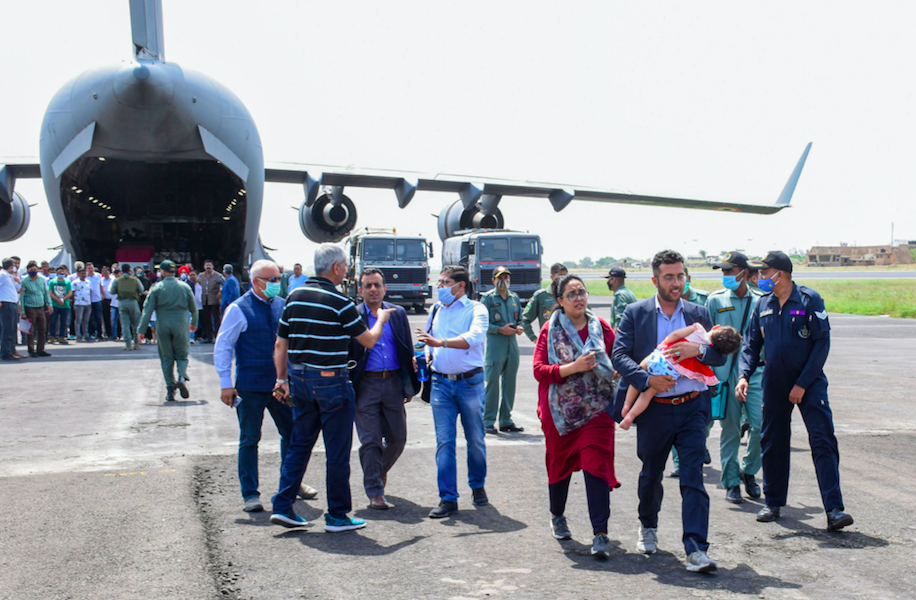 New Delhi: India has evacuated the Indian ambassador and the embassy staff from Kabul, two days after the Taliban entered the capital and installed themselves as the new dispensation.

The closing down of the Indian embassy had been in the works since it became clear that there will be no smooth transfer of power and that the Taliban forces will be entering the capital.

On Tuesday morning, the Ministry of External Affairs spokesperson announced, “In view of the prevailing circumstances, it has been decided that our Ambassador in Kabul and his Indian staff will move to India immediately.”

In view of the prevailing circumstances, it has been decided that our Ambassador in Kabul and his Indian staff will move to India immediately.

His announcement came only after the Indian Air Force’s C-17 Globemaster was airborne for a couple of hours after leaving Kabul airport around 7:30 am.

This flight had a tense run-up as an earlier group was apparently turned away from the airport by Taliban forces on Monday and were allowed to board their flights after negotiations, as per The Hindu.

After a stop over at Jamnagar air force base, the flight reached Hindon in Ghaziabad at around 5.30 pm this evening.

A day earlier, another C-17 Globemaster had bought the first batch of Indian personnel back to India.

India had closed the embassy during the civil war between the Mujahideeen factions, when it came under cross-fire of rockets several times.

As per officials, there are still several Indian nationals stranded in Kabul who are awaiting repatriation. They will have to await the resumption of commercial flights that have been suspended at the Hamid Karzai International Airport after Afghan security personnel left their posts and Afghan citizens surged onto the tarmac, desperately looking to leave the country.

Indian external affairs minister S. Jaishankar tweeted earlier that he had spoken about the urgent need to restore airport operations in Kabul with US secretary of state Anthony Blinken. The Indian minister is in the US to preside over two events at the UN Security Council.

Discussed latest developments in Afghanistan with @SecBlinken. Underlined the urgency of restoring airport operations in Kabul. Deeply appreciate the American efforts underway in this regard.

Later on Tuesday, he stated that the movement of the Indian ambassador and the embassy had been a complicated exercise and thanked all those “whose cooperation and facilitation made it possible”.

The MEA spokesperson had said on Tuesday that India was to facilitate repatriation of Afghan Hindus and Sikhs. A day later, MEA said that it had already received requests from Afghan Sikh and Hindu community leaders and were in touch with them.

According to Indian Express, Taliban representatives met with Hindu and Sikh leaders and assured them of their safety and security.

The head of Kabul’s gurudwara, Gurnam Singh told Express that around 300 Hindus and Sikhs were taking shelter at the temple.

“But a meeting was held today which was attended by representatives of the Taliban and members of Sikh community. Taliban leaders have assured our safety and peace. They said we need not flee our country and can continue to live here peacefully. They have promised that we can practice our faith and there will be no interference with our religious practices. They have also given a number on which we can contact if there is any issue,” said Gurnam Singh.

Meanwhile, the Indian home ministry has announced a new category of e-visa for Afghan citizens due to the situation in the war-ravaged country.

“As regards Afghan nationals, our visa services will continue through an e-Emergency visa facility, which has been extended to Afghan nationals. This can be accessed through our e-visa portal at https://indianvisaonline.gov.in/evisa/Registration,” said a MEA press release.

This new category applies to all Afghan citizens, irrespective of religion. All the applications will be scrutinised and a security review will be done to check the background. An initial six month visa will be given to successful applicants.

Besides, there are still over thousand Indian nationals stranded in Afghanistan, who are unable to return as commercial flights were stopped.

“The main challenge for travel to and from Afghanistan is the operational status of Kabul airport. This has been discussed at high levels with our partners, including by EAM with the US Secretary of State. Government of India is committed to the safe return of all Indian nationals and will institute flight arrangements once Kabul airport is open for commercial operations,” said the MEA press note.

After a surge in US troop numbers, Kabul airport resumed evacuation operations, but commercial flights were still to be rescheduled.

If commercial flights do not resume, the government is also considering taking special charter flights to Kabul.

Meanwhile, 21 Indians who were employed with French embassy were evacuated to Paris.

The ministry stated that the immediate priority was to obtain “accurate information” about the number of Indian nationals in Afghanistan. All of them had been requested to urgently register with the MEA’s newly formed Special Afghanistan cell.