No One Will Be Sent Back, India Tells Visiting Bangladeshi Leader on NRC

Sayed Naizbul Bashar Maizvandary, chairman of Bangladesh Tariqat Foundation, raised the issue of the NRC process in Assam saying that “there is a lot of anxiety about it in Bangladesh”.

New Delhi: The Indian government assured that no “illegal foreign migrants” that have been sifted out under the process of the National Register of Citizens (NRC) will be sent to Bangladesh, the head of a Bangladeshi ruling alliance party said on Tuesday.

Sayed Naizbul Bashar Maizvandary, chairman of Bangladesh Tariqat Foundation (BTF), is on a visit to India sponsored by Indian Council for Cultural Relations (ICCR). BTF is part of the 14-member ruling alliance led by Awami League.

At an interaction organised by Observer Research Foundation, Maizvandary said that he raised the issue of the NRC process in Assam with the ministers as “there is a lot of anxiety about it in Bangladesh”.

He said that that Rijiju had explained that this was a “long term process” being conducted under judicial scrutiny and that the figure of 40 lakh names not being in the NRC was “not final”.

An Indian government communique on the meeting said that Rijiju informed Maizvandary that “it is a process undertaken under the supervision and direction of Supreme Court of India”.

According to the senior Bangladeshi politician, Rijiju assured him that no one will be deported to Bangladesh at the end of the process.

“He told me that no persons will be sent back to Bangladesh,” said Maizvandary. Even if they are found to be foreign nationals, Rijiju said that they are “part of India and its economy”, claimed Maizvandary.

Rijuju further conveyed that India did not want relations to be affected adversely with Bangladesh.

Maivandary noted that he jokingly told Rijiju that if any left-overs from the NRC scrutiny process was pushed into Bangladesh, it would really add to his country’s financial burden. “I told him that I really don’t understand the technicalities… but we already have 11 lakh (Rohingyas)… 40 lakh aur se hum mar jayenge (we will die with additional 40 lakh),” he said, chuckling.

He also added that he raised the issue of India’s support in persuading Myanmar to take back lakhs of Rohingyas who have taken refuge in Bangladesh since last year.

The Bangladeshi leader is here in Indian capital when the streets of Dhaka have been blocked for over a week due to protests triggered by death of two school students in a road accident. 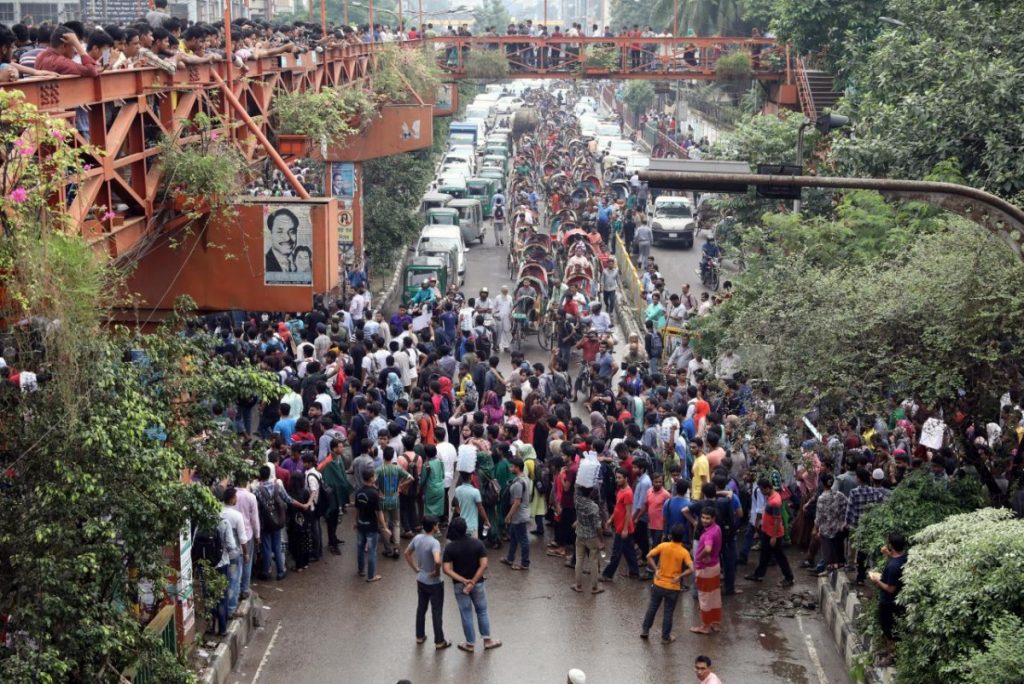 According to Syed Tayabul Bashar Maizbhandari, the chairman’s son and BTF joint secretary, the entire country had been supporting the peaceful protests by the students to ask for better road safety. However, the rallies turned violent due to rumours about protestors being detained at the office of ruling Awami League party. Since then, Bangladesh has seen violent clashes between students and police forces, with several journalists being assaulted and a well-known photojournalist arrested.

“The movement has been hijacked by outside forces,” asserted Maizbhandari, who pointed out to the role of social media in spread of “fake news” in fuelling the clashes.

However, he said that his party unequivocally condemned the assault on photographers and demanded the arrest of the security officials.

With parliamentary elections due this year, chairman Maizvandary said his party has demanded 30 seats from the Awami League. Last time, they had been allotted only two seats, both of which they had won.

“This month is for national mourning due to the death anniversary of Bangabandhu. We will not hold any dialogue in this month,” he said, adding that negotiations will be done in September. The schedule for the election will be announced in October, with December 27 being the likely polling date.

When asked whether elections will be ‘free and fair’, he said, “Elections are always free and fair… Hum jitney ke liye jo karna hai woh karenge (We will do wha we need to do to win)”.

Maizvandary, who belongs to a prominent Sufi family, described his party as not being similar to other islamic political parties, “as we believe in secularism” and the “values of 1971”.

To another question about the role of the ultra-right islamist group Hefazat-e-Islam, he said candidly, “The government may be using them for coming elections… It is best to keep them in good humour.. They are getting everything”.