India’s Gains From ‘Vaccine Diplomacy’ – if Any – Will Be Small, Transient and Pyrrhic

Generosity is fine when you have the wherewithal to be generous. But when your own population is deprived, it is nothing but foolhardiness.

A worker carries a package of Oxford-Astrazeneca COVID-19 vaccines that arrived from India as a gift to Bangladesh, in Dhaka, Bangladesh January 21, 2021. Photo: Reuters/Mohammad Ponir Hossain

New Delhi has launched a virtual global blitz by exporting vaccine candidates made in India, some as a grant, and others commercially. Back home it is being tom-tommed as a major diplomatic coup that will enable New Delhi to make key breakthroughs, especially in its neighbourhood.

How much of an impact will the Indian gesture really make? And is it really the right thing to do? It is difficult to make an assessment, since currently, vaccine diplomacy is in a domestic echo chamber where it’s celebrated as yet another ‘masterstroke’. Actually, the Modi government’s public relations target is really domestic opinion, aimed at garnering credit for the government on account of the vaccine rollout – something that is supposed to make people forget its early and disastrous missteps.

But surely, our neighbours will be appropriately thankful? Don’t hold your breath.

In international relations, gratitude is usually a highly overrated commodity. In the 1950s, the Soviets undertook the largest transfers of capital equipment in history by providing China with the wherewithal to set up entire industries, machinery, aircraft, cars, trucks, precision instruments etc. But by the mid-1960s, the Chinese viewed them as enemies.

Likewise, in the 1960s the United States provided India with massive aid to modernise its education, scientific and technical capacity, food aid and biotechnology for the Green Revolution. But by 1971, India and the US almost came to blows.

Today’s generation of Chinese and Indians would be unfamiliar with those events, despite the sheer scale of the assistance.

By that measure the vaccine thrust is relatively modest—some five million free doses to Bhutan, Maldives, Nepal, Bangladesh, Myanmar and Seychelles. There is another category of exports to Saudi Arabia, South Africa, Brazil and Bolivia, which is that they are strictly commercial.

Brazil’s message comparing the delivery of the vaccine to Hanuman bringing the Sanjivini plant played well in the Indian media, but one wonders whether it was a product of the BJP media cell or its counterpart in Brazil.

Also read: India Says Vaccine Delivery to a Scrambling Brazil May Take Place Within a Day

The delay in the arrival of the AstraZeneca vaccine candidate – called Covishield in India –irritated Brazil President Jair Bolsonaro, who wants to offset the credit being reaped by his centrist rival, the Sao Paulo governor Joao Doria,  who had promoted the vaccine developed by the Chinese lab Sinovac, along with a local partner, and had already begun vaccination.

Note, the vaccine candidates exported are devised by a partnership between Oxford University and the British-Swedish company AstraZeneca,  and are manufactured in India on contract by Serum Institute of India Ltd.

Oxford’s and AstraZeneca’s researchers published data from phase 3 clinical trials of Covishield in The Lancet, in which they wrote that the data indicated the candidate was safe and efficacious.

It’s not clear whether Indians are also exporting the domestically devised Covaxin: this would be unconscionable considering Bharat Biotech, its maker, is yet to report any data from Covaxin’s phase 3 clinical trials. Incidentally, Bharat Biotech has applied for emergency use approval for Covaxin in the Philippines. In India itself, people have to sign consent forms before getting a shot of this vaccine candidate, since the national drug regulator has approved its rollout in “clinical trial mode”. 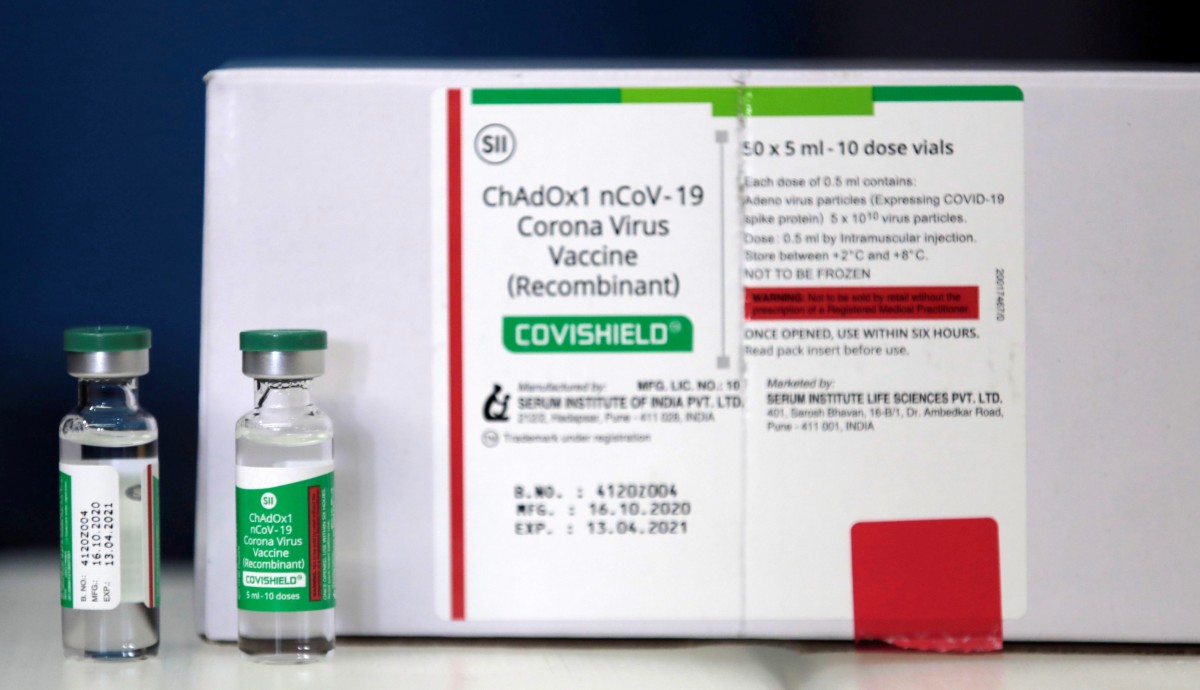 Covishield, a COVID-19 vaccine manufactured by Serum Institute of India, is displayed to the media, in Kathmandu, Nepal January 21, 2021. Photo: Reuters/Navesh Chitrakar

Data from phase 1 clinical trials was available from a preprint paper uploaded online earlier, and which The Lancet published after peer review on January 21, 2021. The researchers write in this paper that their study doesn’t say anything about Covaxin’s efficacy. Bharat Biotech and the Indian Council of Medical Research are currently conducting Covaxin’s phase 3 trials. The data from this, involving about 25,000 volunteers, is expected to be available around March 2021.

It is difficult to blame South Block for using COVID-19 to promote its diplomacy. In that sense we are only following China, which, from the outset, used the pandemic – which its own carelessness may have helped spread – for diplomatic purposes. To change the COVID-19 narrative and show itself as a benevolent nation, China sent masks, PPE suits, gloves, testing kits and medical aid, as well as sold ventilators and other health equipment to countries like France, Italy and various Central and East European countries. Chinese foundations like the Alibaba Foundation and the Jack Ma Foundation also provided aid to various European countries.

So far, information on Chinese vaccines has been scarce. Researchers have published some data from phase 1 and 2 trials of the Sinovac vaccine. There has been conflicting information about its efficacy, with researchers in Brazil reporting 50.4% versus those in Turkey claiming 91.25%. Another vaccine candidate by Sinopharm has undergone phase 3 trials and has claimed 78% efficacy, while a study in UAE puts it at 86%. The international medical research community doesn’t yet have fixed numbers to work with.

Several Asian countries like Singapore, Malaysia and the Philippines have signed deals with Sinovac, and in January 2021, Indonesia unrolled its vaccination campaign with this vaccine. Turkey has approved Sinovac for emergency use and the company had deals in Brazil and Chile. The UAE and Bahrain have deals for Sinopharm.

In contrast to China, India doesn’t have an image issue in pursuing COVID-19 diplomacy. But it has another problem: it has few equities to influence neighbourhood opinion, such as loans, grants and military equipment. China is way ahead there. So if New Delhi is riding on the back of a COVID-19 vaccine to gain friends and influence people in the region, we can’t grudge that. You have to work with the instruments you have.

There is, however, one problem. Hundreds of millions of people have yet to be vaccinated. So has the government done the right thing in exporting 5 million doses? Surely those doses could have been used to inoculate vulnerable Indians at a greater speed?

A small group of rich countries, comprising just 16% of the world’s population, have locked up 60% of the global vaccine supply, according to Duke University’s Global Health Institute. Canada has enough to vaccinate its population six times over.

Generosity is fine when you have the wherewithal to be generous. But when your own population is deprived, it is nothing but foolhardiness. We must, of course, understand the commercial compulsions of  Serum Institute, which must deliver on its contract. But it is difficult to celebrate South Block’s vaccine diplomacy, if necessary protection to vulnerable Indians is being delayed – because that delay means so much more illness and death.