India, US, Japan, Australia Meet Together for First Time in Ten Years

The last meeting of officials of the four countries took place in May 2007 in the Filipino capital on the sidelines of the ASEAN Regional Forum. 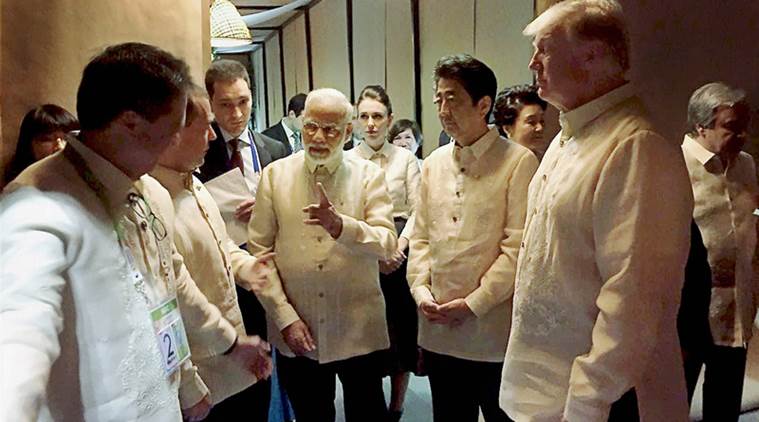 New Delhi: After a gap of ten years, senior officials from India, Japan, Australia and United States met in Manila and agreed that a “free” and “open” Indo-Pacific was in their common interest.

The meeting happened less than a month after the Japanese foreign minister Taro Kano revealed the consultations had already begun for a “top-level” dialogue between the four countries.

The last meeting of officials of the four countries took place in May 2007 in the Filipino capital on the sidelines of the ASEAN Regional Forum. That same year, all four countries, as well as Singapore, took part in the Malabar exercises in September. However, the initiative failed to take off after Australia withdrew under pressure from China.

It took a decade for the countries to get back together – again in Manila.

The 2007 meeting was declared as “exploratory”, with officials from additional secretary rank.

This time, the officials were a tad junior at joint secretary-level. The Indian officials at the table were joint secretaries in charge of MEA’s desks of East Asia and Southeast Asia, Pranay Verma and Vinay Kumar.

The MEA press release noted that the meeting was for “for consultations on issues of common interest in the Indo-Pacific region”.

“The discussions focused on cooperation based on their converging vision and values for promotion of peace, stability and prosperity in an increasingly inter-connected region that they share with each other and with other partners,” it added.

The Japan foreign ministry’s press note said that the officials “discussed measures to ensure a free and open international order based on the rule of law in the Indo-Pacific”.

The Australians stated that the four countries met to “discuss a shared vision for increased prosperity and security in the Indo-Pacific region and to work together to ensure it remains free and open”.

There were similar buzz words in the four press notes from the Indian, Japanese, Australian and US foreign offices.

All of them spoke about a free, open “Indo-Pacific” region and that discussions covered terrorism, proliferation and connectivity.

But there was also differing omissions among the various read-outs.

The US spokesperson Heather Nauert specifically referred to “adherence to international law and standards, based on prudent financing” when referring to “increasing connectivity” being one the items on the agenda.

Before he visited India, US secretary of State Rex Tillerson had flagged China’s “predatory” financial tactics for its flagship Belt and Road Initiative and the need to forge an alternative lending mechanism for infrastructure-hungry nations.

The Japanese, American and Australians explicitly referred to North Korea’s nuclear and missile programmes. The DPRK reference was not specifically mentioned by India, though it did refer to concerns of proliferation in Indo-Pacific region.

The press releases issued in Washington, Canberra and Tokyo mentioned that discussions were on ensuring “rules based order” and “freedom of navigation”. These are mainly euphemisms for China’s aggressive policy in the South China sea, where it has been building islands and also refused to take part or accept an international tribunal judgement in dispute with Philippines.

Both the phrases were, however, missing from the Indian statement.

This is, despite, India being a frequent user of both the terms in diplomatic documents.

Ahead of the meeting, India has been treading with care to project the meeting of the four countries is not an anti-China clique.

When asked initially last month about the proposal for a quadrilateral, Indian foreign ministry spokesperson Raveesh Kumar said that India was “open to working with likeminded countries on issues that advance our interests and promote our viewpoint”. He cited India’s trilateral discussions with China and Russia on the Asia-Pacific as one such example.

Last time in 2007, China had issued a demarche to all the countries over the meeting of the meeting over the quadrilateral meeting. Chinese president Hu Jintao had even personally asked

Indian prime minister Narendra Modi will be meeting with all three of his counterparts from US, Japan and Australia at the East Asia summit. He is also scheduled to meet with Chinese premier Li Keqiang, which will be their first meeting since the Doklam stand-off came to an end. Modi had earlier met President Xi at the BRICS summit in Xiamen.

US, Japan and Australia also highlighted that all participants affirmed their commitment to “continuing discussions and deepening cooperation based on shared values and principles”. Only US and Australia used the term ‘Quadrilateral’ while referring to the Manila talks.

Only US, however, used the ‘D’ word, when talking of “shared values” of the four countries.

The quadrilateral partners committed to deepening cooperation, which rests on a foundation of shared democratic values and principles, and to continue discussions to further strengthen the rules-based order in the Indo-Pacific region. [State department]

India’s press, however, didn’t cite any future talks. Rather, it concluded by stating that Act East policy will be the “cornerstone of its engagement in the Indo-Pacific region”.