As the recent 2+2 meetings highlights, India’s interest in working with the US in the regional context has been unprecedented this year. 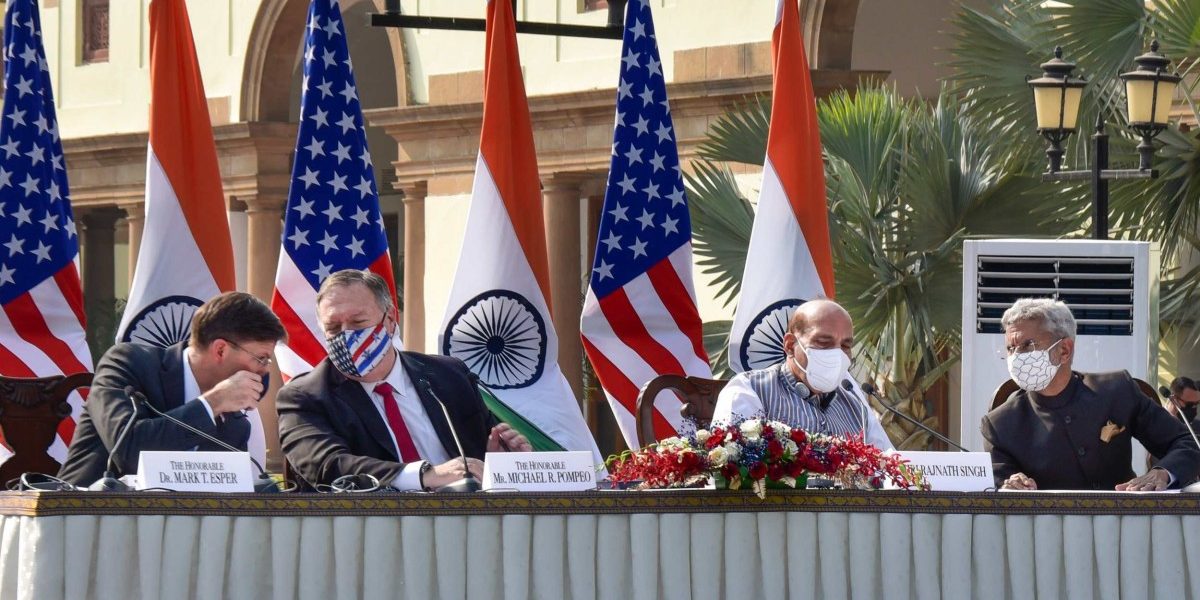 New Delhi: For American officials used to grappling with India’s traditional quest for strategic autonomy in all matters, especially national security, the epiphany that its relations with the United States may have finally turned a corner came just three weeks ago.

In the Japanese capital, the foreign ministers of the four ‘Quad’ countries – the US, India, Japan and Australia, met for their first standalone ministerial meeting. They had gathered for the first time in New York in 2019, but it had been on the sidelines of the United Nations General Assembly.

It was said to be a seamless meeting of minds, with ministers finishing each other’s sentences and their discussions spilling over into lunch. The overwhelming part of the agenda at the meeting had dealt with China and the consequences of its actions across the world.

In their opening remarks that were publicly released, only US secretary of state Mike Pompeo had named China, while others had made oblique references at best. But, behind closed doors, it was apparently a different story.

It is learnt that the invitation sent by India to Australia for the Malabar naval exercise next month was a direct result of the Quad ministerial meeting. Australia will be making a comeback after a decade to the Malabar exercise, which will take place in the Arabian Sea and Bay of Bengal off the coast of India.

This year, India’s interest in working with the US in the regional context has been unprecedented, as per external observers. It was not just the US prodding India to take a more regional approach, but also New Delhi bringing Washington’s attention to specific hotspots in the neighbourhood and the Indo-Pacific. Of course, all of them had one similar factor – China.

It is widely accepted that New Delhi’s proactive collaboration with the US and the Quad has been expedited by the six-month-long stand-off at the border in eastern Ladakh with China.

Less than a week after the Quad ministerial meeting, India and Japan joined the ‘Five Eyes’ in issuing a statement calling on big tech companies to give a ‘backdoor’ to governments in ‘end-to-end’ encryption technology.

However, while the Trump administration and secretary of state Mike Pompeo were talking of the Chinese Communist Party and “secretary general” Xi Jinping, there was not a similar rhetoric from New Delhi. But, Washington has not nudged New Delhi to publicly join in the ‘naming and shaming’, as the perception is that India has already gone a fair distance in being far less hesitant on the China issue in private diplomatic meetings and conversations.

In his opening remarks at the ‘2+2’ ministerial dialogue on Tuesday, Pompeo said the agenda ranged from “cooperating on defeating the pandemic that originated in Wuhan, to confronting the Chinese Communist Party’s threats to security and freedom, to promoting peace and stability throughout the region”.

His cabinet colleague, US defence secretary Mark Esper, called for “institutionalising” cooperation “to meet the challenges of the day and uphold the principles of a free and open Indo-Pacific well into the future”.

Later, at the joint media briefing, Esper stated that India and the US stood “shoulder to shoulder” in support of a free and open Indo-Pacific, “particularly in light of increasing aggression and destabilising activities by China”.

Pompeo added that there had been “robust discussions about the Chinese Communist Party”. He added that China was “ no friend to democracy, the rule of law, transparency, nor to freedom of navigation”. True to form, there was no direct mention of China in public remarks by the Indian ministers.

At the start of the talks, Indian external affairs minister S. Jaishankar stated that “comfort levels (with the US) today enable us to engage much more intensively on matters of national security”.

In his media statement, Jaishankar observed that peace and stability in the Indo-Pacific region was only possible by “respecting the territorial integrity and sovereignty of all states”.

With an eye on China, Jaishankar stated, “A multi-polar world must have a multi-polar Asia as its basis”.

Curiously, this line in the transcript released by the US state and defence departments is radically different. “Excellencies, in the area of defence we are challenged by reckless aggression on our northern borders…,” Singh is quoted as saying in the transcript, which then abruptly notes that the rest of his words were “inaudible”.

While the Ministry of External Affairs has released Jaishankar’s opening remarks, the defence ministry has not done the same for Rajnath Singh. However, the opening statements were recorded for television – and Singh’s statement in Hindi does not have mention of any words that can be loosely translated into “reckless aggression” or “northern border”.

Besides this transcription confusion, New Delhi is rather satisfied with the results of the ‘2+2’ dialogue for which the two US administration officials dashed to India just a week before the US presidential elections.

“If there is a change at the helm, then this meeting set a high bar. If the Trump administration continues, then these policies will continue anyway,” said a senior Indian government source.

On the ‘institutionalisation’ of the Quad, India remained non-committal. “We are already meeting at ministerial level now which will become an annual event… Unless there is a sense that all members want militarisation, it is where it is at political and diplomatic level,” the source stated.

Also read: India Wants to Urgently Review its ASEAN Goods FTA, But Other Countries Are Slow to Play Ball

Five agreements were signed, including the third and last foundational defence agreement – Basic Exchange and Cooperation Agreement (BECA), which will allow for real-time sharing of geo-spatial data.

“We continued our discussions on larger regional and global perspective today over the 2+2. Signing the BECA today after signing the LEMOA in 2016 and COMCASA in 2018 is a significant achievement in that direction,” said Singh, framing the agreement as necessary for a wider cooperation between India and the US.

The joint statement specifically talked about creating a “sustainable, transparent, quality infrastructure development” in the region, with joint projects in third countries. It also indicated that India will be joining the US-led ‘Blue Dot’ network, which aims to be an alternative to China’s Belt and Road Initiative.

“Recognising the need to contain the build-up of sovereign debt in developing and low-income countries by ensuring responsible, transparent, and sustainable financing practices for both borrowers and creditors, the Ministers looked forward to exploring ways to cooperate under the Blue Dot Network,” said the document.