The shift is in defiance of international law and UN Security Council resolutions. 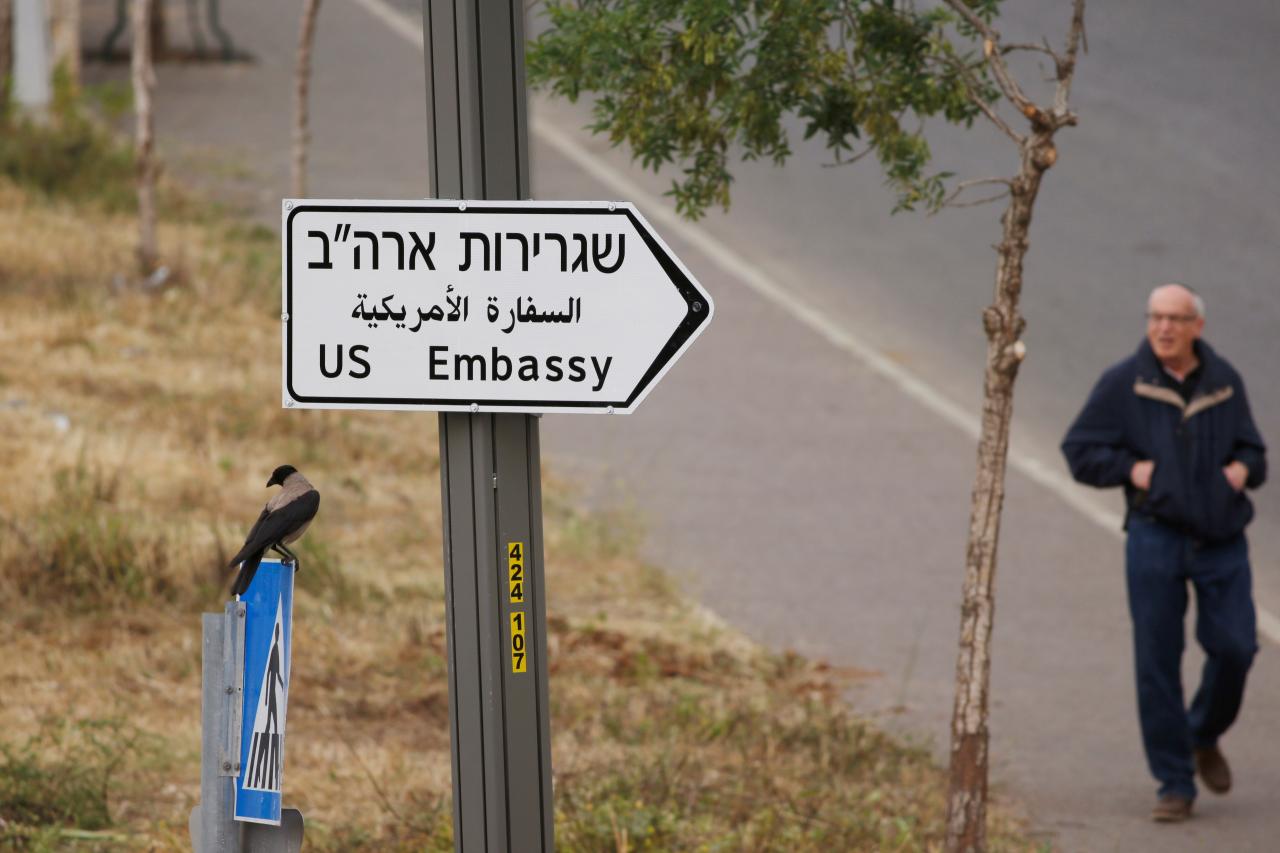 A man walks next to a road sign directing to the U.S. embassy, in the area of the U.S. consulate in Jerusalem. Credit: REUTERS/Ronen Zvulun

New Delhi: India has decided not to attend any of the official events marking the shift of the United States embassy in Israel from Tel Aviv to the disputed city of Jerusalem.

US President Donald Trump had announced last December that the embassy would be relocated to Jerusalem,  in line with his administration’s official recognition of the city – half of which Israel has illegally occupied – as the capital of the Jewish state.

To mark the formal shift, the US embassy will hold a ceremony at the already existing consulate building in Jerusalem on Monday, May 14.

The Israeli foreign ministry has also organised a function to mark the event, which it regards as historic since no major power has to date so openly defied UN Security Council resolutions on the status of Jerusalem or the norm of withholding international recognition from an act of occupation.

Indian officials confirmed to The Wire on Saturday that India would not be attending either of the two events.

Officially, India has been invited only by the Israeli foreign ministry, which sent cards out to the entire diplomatic community based in Tel Aviv.

Israeli media reports from earlier this week stated that less than half of the ambassadors accredited to Israel had accepted the invitation.

“At the moment, 30 of 86 ambassadors have responded positively [to the invitation]. A large number of ambassadors have yet to respond. We hope all the ambassadors will arrive,” said Israeli foreign ministry spokesperson Emmanuel Nahshon on May 9. Most of the absent envoys would be from the European bloc, though some east European countries would be present.

The US embassy has for the record not invited any members of the diplomatic community. “The opening of the embassy is a bilateral celebration between Israel and the United States. We have not invited any of the diplomatic corps, and so it would be incorrect to report that any other nation declined our invitation because we simply didn’t send any out.,” US ambassador to Israel David M Friedman said in a special state department briefing on Friday.

However diplomatic sources told The Wire that while it was technically correct that the US embassy had not issued official invitations for the dedication ceremony, American diplomats had informally told other ambassadors that the US embassy would be happy to host any member of the diplomatic community who would like to attend the function on May 14.

It is learnt that some ambassadors will be present in Jerusalem, along with the 800 other invitees to the event. The US presidential delegation will include Trump’s daughter, Ivanka Trump, son-in-law Jared Kushner and US treasury secretary Steven Mnuchin. Also scheduled is a video broadcast by Trump.

However, the Indian ambassador to Israel will not take part in the reception hosted by the Israeli foreign ministry on Sunday night or the main event in Jerusalem on Monday.

When Trump had announced his decision to recognise Jerusalem as the Israeli capital and move the embassy there, India’s reaction had been relatively muted. “India’s position on Palestine is independent and consistent. It is shaped by our views and interests, and not determined by any third country,” MEA spokesperson Raveesh Kumar said on December 7, 2017.

Kumar did not reiterate India’s support for East Jerusalem as the capital of a future Palestinian state. This has been India’s traditional stand but has been omitted from India’s diplomatic statements for over an year.

However, India did vote in favour of the resolution in 193-member United Nations General Assembly that called on the US to withdraw its decision to recognise Jerusalem as Israel’s capital in violation of various Security Council resolutions. India was one of 128 nations to vote ‘yes’, while nine countries voted against it and 35 others abstained.