‘Thinking strategic’ means organising ourselves differently, engaging in more internal reflection within the government, sustained dialogue with academia, think-tanks and other non-state actors, plus continual self-education. 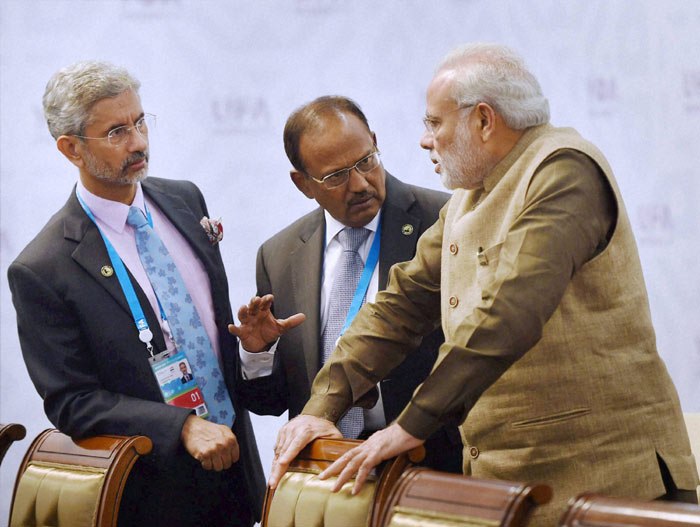 Does India have a strategic culture?

At Delhi’s conferences, seminars, lectures and book launches, you can’t cast a pebble without hitting a strategic analyst. They write and speak profusely on national security, neighbourhood politics, the Indian Ocean and regional affairs. They provide value, helping us examine national issues.

But the question persists: does a strategic culture guide our polity, or do we throw in that word without really engaging in focused strategic analysis or developing a real strategic policy? What’s missing?

First, our governance system rarely publishes documents on key national challenges. No foreign policy white paper or policy document has emerged in recent decades. A ‘strategic’ document should ideally make holistically examine the issues, give a long-term perspective and set out attainable goals. Simply adding that word to a title produces a misnomer.

An example: in July 2018, Prime Minister Narendra Modi announced in Uganda a ten-point Africa policy. On July 28, I tweeted:

One tweet does not set the Yamuna on fire – or stir South Block to action – but when a policy white paper was suggested to some Africa expert colleagues, they gave wry smiles. Surely a document, prepared after due consultation, as a ‘whole of government’ guideline, could provide real policy direction, producing actionable goal-setting. It is not difficult.

Second, think-tanks and scholars should ideally undertake their own comprehensive studies, examining issues in depth, offering actionable ideas. That does not often happen. This is not the same as writing out a 900-word op-ed, offering a broad-brush examination of what is undoubtedly a real issue.

Also missing is real debate on foreign affairs in our parliament, of a kind that was a norm in the 1960s and 1970s. Remember, prompting and guiding informed public debate is not a monopoly of the government; we now have a sufficient density of think-tanks for them to take their own lead, even set an agenda. This happens, but infrequently. A typical seminar or one-off discussions, even when well-presented, are not enough.

We see agencies such as RIS or ICRIER picking up a theme (example: science diplomacy), setting out a mechanism for sustained examination with published papers, discussions and a substantive output. Might not someone take this to the next level, with a well-reasoned, self-contained ‘blue paper’ of their own? That would stir more discussion and hopefully lead to official policy actions.

Also read: India’s Focus Shift From SAARC to BIMSTEC Is Strategic, but Underused

Third, governments need substantive public feedback. Our TV talkshows are dominated by multi-speaker discussions (crowded in tiny windows, each participant clamouring for attention); mostly they generate contrived cacophony, in the tu-tu main-main style. We obsess over Pakistan, over-dramatising every action or atrocity by what has often been a misguided regime.

Sadly, whipping up domestic sentiment via our 150-and-counting news channels and social media tends to constrain India’s official response. Pakistan craves for nothing more than domination in India’s domestic discourse. Ordinary viewers that are dissatisfied with such output are starved of credible, wide-focus neighbourhood and international news, though sarkari channels make an effort, as do a few private channels, like WION.

Fourth, international affairs studies are neglected at our public universities. Private ones like Ashoka, Jindal and Symbiosis, and others, partly compensate (though some are very pricey by Indian standards); most others don’t offer this subject. Thanks to the growth in think-tanks, plus other new job opportunities such as risk management, international studies are gaining some traction among students.

But aberrations persist. Only in India can a candidate gain an area studies PhD without learning that region’s language. Result: China, Japan, Korea or Arab affairs specialists are prisoners to English-language material, except the lucky ones that have studied in the relevant country. That becomes a career-long weakness, undermining their credibility. No one seems interested in changing this dismal situation.

What we can do

How can we improve matters? Beyond the obvious remedial actions, we need to make a realistic assessment of our attainable international priorities. Consider this: for several years, we pushed the goal of India’s Nuclear Suppliers Group (NSG) membership, as a top objective. But nobody explained why that was vital; India is many years away from producing nuclear power plant equipment.

Designation by the UN of an ailing Masood Azhar as a proscribed international terrorist has now been accomplished, thanks to fine work by our diplomats. But will that alter Pakistan’s behaviour in sponsoring terrorism? The jury is still out. My point is not that we should not assiduously pursue anti-terrorism actions at the UN or elsewhere. Rather, we need to choose with care those issues that are elevated to the status of top-most foreign policy goals.

What should be done? ‘Thinking strategic’ means organising ourselves differently, engaging in more internal reflection within the government, sustained dialogue with academia, think-tanks and other non-state actors, plus continual self-education.

Consider this: China’s top policy group, the Foreign Affairs Leading Small Group (President Xi Jinping, Premier Li, Politburo Standing Committee members, plus a few ministers, full membership not disclosed), meet national experts at structured ‘tutorial’ style sessions, perhaps 15 to 20 times a year (in the past they also listened to foreign experts, but that may have ended under Xi).

Namibia, since founding President Sam Nujoma led his small country to much delayed independence in 1990, holds an annual retreat at the Atlantic Ocean resort of Swakopmund; leaders, cabinet ministers, top officials and others brainstorm for a week, and a few foreign experts are invited to lecture to them.

But in our New Delhi ethos we are all-knowing, and need little advice, except from pliant small coteries. We especially distrust foreign experts.

We did think strategically during the East Pakistan crisis of early 1971 that produced Bangladesh, and again in 1971-75, when Sikkim was integrated into India.

The perils of the status quo

Might we also say that strategic action is often missing in our economic policy? Two examples: Our internet user base of 550 million and growing is an inestimable resource, but we left it as an open playground for the global majors. China exploited its own home base, now with one billion internet accounts; it blocked Microsoft, Google, WhatsApp and a host of other IT US monopolies, to build Alibaba, Tencent, Oppo, Vivo, Weibo and the rest, to produce hardware and apps.

Indian ICT products are absent from the global market. We excel at providing corporate services, through TCS, Infosys, Wipro and many others. Our IT ‘unicorns’ also provide IT-enabled services, doing exceptionally well – think of Byju, Ola, Oyo among others, many on way to global status.

Way back in 1989, an Oracle vice-president said in a conversation at San Francisco (where I was consul general): today we use Indian talent for a price arbitrage, but the day is not far when companies will throng to India seeking quality arbitrage. That quality, a scarce world resource, powers the above. And a host of global companies have established their R&D centres across India. But honestly, has strategic vision guided our IT industry actions? At best, we have valorised only a part our potential.

Or take the very different example of regional trading arrangements. We grope for a coherent free trade agreement policy, and lament that the majority of FTAs we have signed, at bilateral and regional levels, have worked against India. That fact is undeniable, but what has been the reason? Did we pursue a coherent tariff, fiscal and domestic industrial policy to get the best out of our FTAs? Or did we persist with a traditional silo approach on these cross-cutting national challenges, at a time when overall policy coherence was needed?

We currently drag our feet at the Regional Comprehensive Economic Partnership negotiations, which are the remit of the Commerce Department. The Ministry of External Affairs, the prime overseas action agent on economic diplomacy, barely gets a place at the New Delhi economic policymaking table. Can fragmented policy-making or uncoordinated actions deliver a strategic economic policy?

Perhaps better coordination now lies ahead in the Modi 2.0 government, with two former Indian Foreign Service officials as ministers, S Jaishankar as minister of external affairs, and H.S. Puri as a triple-hatted minister of state in the commerce department (besides his independent charges, works and housing, and civil aviation).

To sum up, strategic policy making – we might also call it systematic decision-making and implementation – has three ingredients:

We did that in the past, guided by compelling national imperative, in the two major events of the 1970s mentioned above. Can those lessons be applied in these banal times, to win objectives that are no less compelling – namely, the actualisation of an India of our dreams?