The Indian Ocean was a common theme for both leaders, with Modi noting that its waters “were our common sea frontiers”. 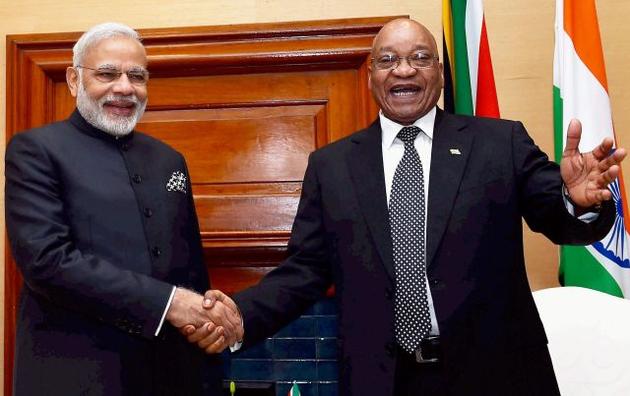 New Delhi: Indian Prime Minister Narendra Modi and South African President Jacob Zuma, on Friday, batted for strengthening defence ties and improving skill development, even as they boosted the strategic importance of the Indian Ocean in their ties.

Modi arrived in Johannesburg straight from Mozambique on the second leg of his African tour.

He held discussions in the morning with South African President Jacob Zuma, where he specifically thanked him for supporting India’s membership in the Nuclear Suppliers Group.

“We know that we can count on the active support of our friends, like South Africa,” Modi said in remarks to the media after holding formal delegation-level talks. South Africa had been part of a small group of countries who had insisted on drawing up of ‘process’ for the entry of non-NPT signatory countries. India had however pointedly not blamed those nations, and also accused “one country” for raising repeated technical objections to taking up New Delhi’s application during the plenary session in Seoul.

In both their opening remarks, Zuma and Modi talked about the common historical links between the two countries.

Stood together in our common fight against colonialism and racial subjugation: PM @narendramodi on India-SA ties @PresidencyZA @SAPresident

Zuma said said that Modi’s visit was important at “cultural level” for our country. “The arrival of the first Indians in South Africa over one hundred and fifty years ago and the considerable contribution of this community to shaping modern day South Africa, is another reason for the deep bonds between our two countries,” he said.

Four agreements were signed after the talks.

On the trade front, he noted that over 100 Indian companies operating in South Africa were contributing “significantly to economic growth and job creation in our country”. South Africa’s economy is currently the weakest among the BRICS nations, with the growth rate also being the lowest.

The Indian PM pointed out that one-fourth of Indian investments in Africa are in South Africa.

Just like Zuma, he also unveiled four areas for expansion in business ties. These are minerals and mining, chemicals and pharmaceuticals, high-technology manufacturing and information and communication technology.

The Indian PM said that as developing economies, both nations should focus on “improving our human capital”. “Our capacities and needs in the fields of vocational, technical and professional education complement each other, and can benefit both our people,” he added.

The South African president shared similar thoughts. “South Africa values cooperation with regards to skills development. A number of our youth study in India. We are keen to explore further opportunities for training opportunities from India as part of youth empowerment and development”.

Modi was definitely more enthusiastic about being partners in the field of defence and security – “both, at the level of industry and for our strategic and security needs”.

“In India, this is one of the sectors witnessing a complete transformation. It offers exciting opportunities in defence trade. Our companies can also pool their capacities to jointly develop or manufacture defence equipments and platforms. And, not just to meet our defence needs, but also to respond to regional and global demand,” he asserted.

The Indian Ocean was a common theme for both leaders, with Modi noted that its waters “were our common sea frontiers”.

“And, the Indian Ocean Rim Association has emerged as a key platform of engagement for the maritime neighbours connected by the Indian Ocean. I welcome South Africa’s chairmanship of the organization for 2017-19,” he said.

“This organisation is on the ascendancy, owing most immediately to the dynamic leadership of India. During South Africa’s impending chairing of the Association in 2017, we will build on the priority areas begun by India to ensure the sustainable use of the oceans for the benefit of our people,” commented South African president.

Both the leaders are scheduled to meet against for the BRICS summit in Goa in October. Later, both of them addressed the South Africa India Business Forum.

India and South Africa: complimenting each other. pic.twitter.com/VvPhzgvYrn

Later in the day, Modi visited Constitution Hill, which was the location for a notorious prison  with rather famous inmates over the years.

On the first day of his trip in Mozambique, three agreements were signed after his meeting with his host, President Filipe Nyusi. This included a long-term agreement for purchases of pulses from Mozambique.

He later visited the Centre for Innovation & Technological Development and addressed the Indian community.

The CITD is located in the S&T Park, result of a unique #IndiaMozambique collaboration, built through an Indian LOC pic.twitter.com/agS6TKNH7x

After South Africa, Modi will travel to Kenya, where he will be the first Indian PM to visit in about 35 years. The last port of call would be Tanzania on Sunday.