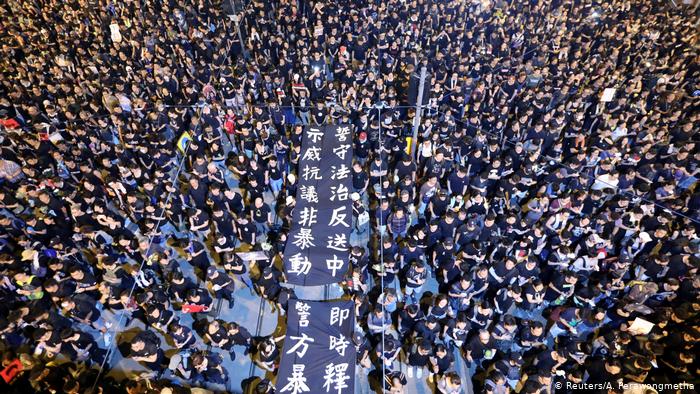 Protesters at a demonstration in Hong Kong. Photo: Reuters/A. Perawongmetha

New Delhi: India was among only two members of the G20 whose consulates did not accept a petition from Hong Kong activists to the international community to put pressure on China to scrap the controversial extradition bill.

Ahead of the meeting of the G20 group in Osaka, Japan, Hong Kong activists have turned to foreign countries.

Hong Kong’s leader Carrie Lam had earlier suspended the extradition bill after the city witnessed the biggest protests ever since the handover by UK in 1997 . However, Lam did not scrap the bill altogether as demanded by the activists. Since then, there has been a renewed campaign to push for cancellation of the proposed legislation,.

On Wednesday night, Hong Kongers were out in force at a rally calling on G20 members to call for the permanent withdrawal of the bill, which would allow for extradition even to regions with whom Hong Kong didn’t have a treaty, including China.

But, earlier in the morning, hundreds heeded a call to go on a silent march across the city to the 18 consulates and office of the European Union to hand over their petition. The march was initiated, as most of the recent protests, through social media apps like Telegram.

A Facebook post on June 24 called for citizens to assembly for the “626 marathon” to various consulates. “In view of the fact that the SAR Government has not yet responded to the four major demands of the public, a group of netizens will launch a marathon petition on June 26, and will send a petition to the consulates of various countries participating in the G20 summit to urge the countries to discuss the current situation in Hong Kong at the summit,” it said.

On Monday, Chinese assistant foreign minister Zhang Jun had stated that China would not allow Hong Kong to be discussed by G-20 nations. Earlier, US secretary of state Mike Pompeo had indicated that the “unfolding” events in Hong Kong could be a topic of discussion between US President Donald Trump and Chinese President Xi Jinping at Osaka.

The crowd, which gathered around 9 am local time, first went to the US consulate, followed by the EU office and then to the British consulate. At all these stops, a consulate official usually stepped out to accept a letter from the Hong Kong activists in front of cameras.

Thereafter, the crowd were urged to split up in three separate group to go to different set of consulates. At all the consulates, the activists read out their petition in their official languages.

#AntiELAB protesters touring 19 CGs of G20 nations are now outside Japan’s CG. A rep is reading out the petition letter in Japanese. pic.twitter.com/q9aWNE3L0o

After making the scheduled rounds, the crowd went to the United Centre in Admiralty, which houses the consulates of Germany and India. While they waited for representatives to show up, the activists expressed their concerns in both German and English.

Germany’s deputy consul general himself showed up to accept their letter, but there was no response from the Indian consulate.

At the final leg of their four-hour ‘marathon’, the organisers said that only two countries had refused to even meet the activists – Indonesia and India.

Organisers say only India and Indonesia refused to accept their letters – so they emailed them and left letters at their door. Just South Korea left now. pic.twitter.com/1p8X6uURpe

According to Indonesian state-run news agency Antara news, the Indonesian consulate did not accept the petition as “Indonesia did not want to be dragged into the internal problems of China”.

The Wire has confirmed that the Indian consulate in Hong Kong did not accept the petition, but there was no public statement on the reason for the refusal.

While US, UK and other western countries have expressed concern about the crackdown in Hong Kong, India has remained conspicuously silent about the protests and the police action. Rather, sources argued that India was acting consistently by not accepting the petition from the Hong Kong activists.

Prime Minister Narendra Modi is expected to meet with Chinese president Xi Jinping in Osaka this week. The Chinese leader is also scheduled to visit India later this year for the second edition of their “informal summit”.

India’s last brush with Hong Kong activism had been in 2016, when some of them were given visa to attend a conference on pro-democracy movements in China at Dharamshala. However, at the last minute, visas were cancelled, after Indian government downplayed the conference after a strong protest by China.