What India, Pakistan Can Learn From the Marshall Islands' Nuclear Disarmament Crusade

Chances of nuclear war between India and Pakistan may be remote, but the recent build-up of military activity along the border and the increasingly aggressive comments by leaders highlights the importance of the crusade against the atomic arms race. 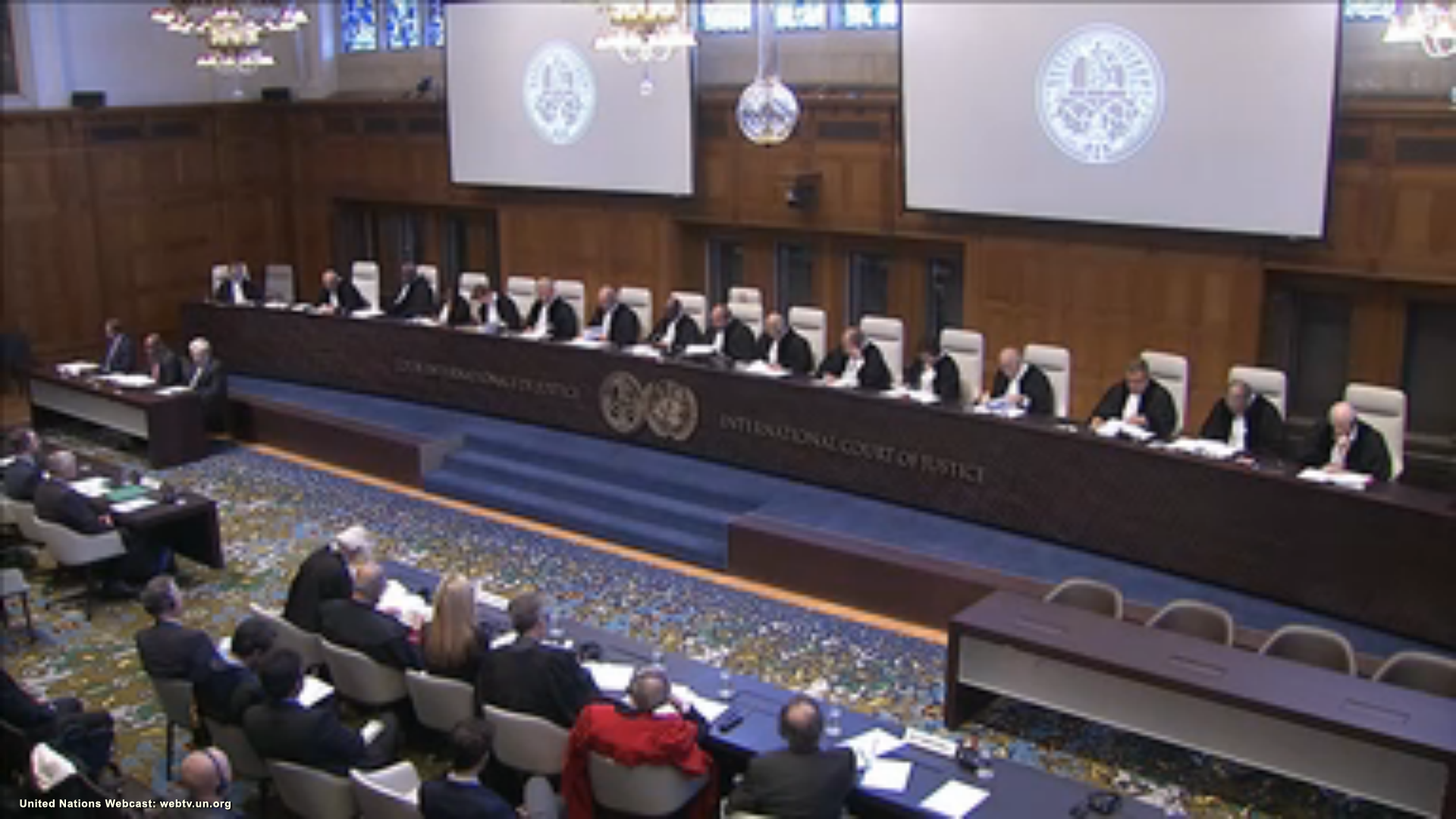 The judges chamber at the ICJ. Credit: Screengrab from live proceedings of case. On October 5, a judicial endeavour by a small Pacific Island nation to mould a nuclear-zero world by holding the atomic-armed states responsible for their alleged violations of international law came to naught at the International Court of Justice (ICJ). The court found that it lacked the jurisdiction to proceed to the merits due to the absence of a legal dispute in a series of cases brought by the Republic of Marshall Islands against nine countries which are believed to have nuclear warheads ready to be used. The cases concerned the obligations pertinent to nuclear disarmament and cessation of nuclear arms race. Apart from the distinct cases against India and Pakistan, the claimant brought lawsuits on the same matter against the P5 countries of the UN Security Council – US, Russia, UK, France and China – and two relatively new nuclear powers, Israel and North Korea. A separate litigation against the US is now awaiting an appellate determination in that country after being thrown out by a domestic federal court in February last year. While the ICJ denied the hearing of cases against India, Pakistan and the UK on substantive issues, the remaining six countries did not participate in the judicial proceedings on the basis of their non-acceptance of the court’s compulsory jurisdiction under Article 36(2) of the statute of the ICJ. It is still baffling that the Marshall Islands proceeded to move on a contentious case route of bringing all nuclear powers to court when there were indisputable jurisdictional obstacles.

Although the root of the matter lies in the 67 nuclear tests carried out by the US on the Marshall Islands during the initial phase of the Cold War between 1946-1958, which caused massive devastation to human life and the environment around the island, its earnest endeavour to bring back the campaign against nuclear weapons to public consciousness is worth noting. The ICJ cases are distinguishable on two counts. Except for the aspect of compulsory jurisdiction due to which three states (India, Pakistan and the UK) were obliged to participate in the proceedings, the Marshall Islands crafted the petitions based on the respondent states’ accession to the Treaty on the Non-Proliferation of Nuclear Weapons (NPT). Thus, the formulation of the dispute against India, which is a non-signatory to the NPT, was based on the alleged failure of its obligations to engage in negotiations in good faith to conclude nuclear disarmament and the cessation of the nuclear arms race at an early date, under customary international law. Despite the existence of a declaration made in 1974 that permits the country to decline the court’s jurisdiction in “disputes relating to or connected with facts or situations of hostilities, armed conflicts, individual or collective actions taken in self-defence”, India opted to defend its legal position before the ICJ, showing its respect to international rule of law.

Even though India and Pakistan have faced each other at the ICJ on three previous occasions, this was the first instance where both countries were seen arguing against the same claimant. Interestingly, while the judgments favouring India and Pakistan were approved by a narrow majority of nine votes to seven, the margin of the judgment upholding the objections of the UK was tied with eight judges in favour and eight against. All three respondent states individually contested the ICJ’s jurisdiction based on the absence of a legal dispute with the Marshall Islands. The court upheld this argument and remarked: “In order for a dispute to exist, the two sides must hold clearly opposite views concerning the question of the performance or non-performance of certain international obligations”. This requirement is normally met when a respondent was either ‘aware’ or ‘could not have been unaware’ that its views were ‘positively opposed’ by the applicant before launching the lawsuit. Despite the references made by the Marshall Islands to their own statements in multilateral fora on nuclear disarmament prior to the date of application, the court did not accept any inference of a direct opposition of views. Further, the court was of the view that any eventuation of a ‘dispute’ during the course of the proceedings through an exchange of statements or claims cannot create a fresh, substantive dispute. Although there are no specific requirements under international law to formally frame a dispute prior to the filing of a claim, it is a basic litigation tactic to, at least, directly communicate their disagreements or allegations to the respondent to ensure that they do not deny their ‘awareness’ about the existence of a dispute. Any international lawyer would be surprised to hear that the Marshall Islands did not make any such efforts.

This undoubtedly is a significant finding, as noted by Judge Peter Tomca who dissented in finding of the absence of a dispute between the parties that “for the first time in nearly a century of adjudication the world court has dismissed a case on the ground that no dispute existed between the parties”. It is unfortunate that the court has departed from its previous flexible position on the question of existence of a dispute by recasting it as a strictly formalistic one, and thereby missing a great opportunity to dissuade the nuke powers from a potential razing and to stop the blue skies of earth appearing grey. Of course, a binding judgment on the merits of interpreting Article VI of the NPT, which obligates nation states to “undertake to pursue negotiations in good faith on effective measures relating to cessation of the nuclear arms race at an early date and to nuclear disarmament, and on a Treaty on general and complete disarmament under strict and effective international control,” would have clearly made it to the blanket of customary international law that even the non-signatories would be ordained to comply with.

Significantly, the Marshall Islands, with a population not more than the average sporting crowd at an India-Pakistan cricket match, hauled the two countries to the world court and succeeded in persuading almost half the quorum of the ICJ. While India hailed the judgment as a vindication of its commitment to a ‘responsible and principled approach to nuclear disarmament’, Pakistan acknowledged the decision as a defeat for the detractors of their nuke program. Needless to say, the judgments pertain to a matter that lies at the centre of the current geopolitical tensions in the subcontinent. Although the likelihood of nuclear war between India and Pakistan is remote, the latest build-up of military activities across the border and, most importantly, the statements from the political and military leadership, especially in Pakistan, indicating the usage of nukes justifies this judicial crusade against the atomic arms race. Contrary to India’s no-first-use-policy, Pakistan maintains a first use stance, and has threatened India time and again with its nuclear weapons. The recurrent skirmishes along the Line of Control and the acrimonious war of words at multilateral platforms, although not a clear opposition of views with respect to the present applicant, demonstrate the denial to work towards a peaceful global order.

From the standpoint of international law, the principal legal organ of the UN was perhaps ill-equipped to make a binding ruling against the nuclear powers of the world, either individually or collectively. However, the Marshall Islands’ endeavour definitely calls for the international community to resuscitate their obligations to actively engage in the non-proliferation and to ease off the existing nuclear programs. Notwithstanding its rejection of jurisdiction, the court took a sanguine view by reiterating Article VI of NPT, which certainly uplifts the international legal obligation of nuclear disarmament. As the court opined in its 1996 advisory opinion on the legality of the threat or use of nuclear weapons, a country may use the nukes only in an extreme circumstance of self-defence, in which the very survival of a state would be at stake” The rivalrous nuclear powers should be mindful in their words and deeds of the rarity of circumstances expressed by the ICJ.

Harisankar K. Sathyapalan is a doctoral candidate in law at the National University of Singapore and a non-resident research fellow with the Centre for Public Policy Research, Kochi. Views are personal. Email: harisankar@u.nus.edu.