Ready to Engage at UNSC If Needed, but Favour Bilateral Resolution on Kashmir: Polish Envoy

Poland’s ambassador to India, Adam Burakowski spoke to The Wire about the country's position on Kashmir, relations within the EU and its growing ties with China.

New Delhi: The Polish government has been fielding calls from Indian and Pakistani governments ever since New Delhi changed the constitutional status of Jammu and Kashmir last week.

That’s because Poland, as a non-permanent member, is the current president of the United Nations Security Council (UNSC). While Pakistan wants the UNSC to discuss the latest developments, India is in no mood for an international airing.

Poland’s ambassador to India, Adam Burakowski said that his country was “concerned” about the recent tensions. Poland wants India and Pakistan to resolve the latest flashpoint bilaterally, but is also willing to engage at the Security Council if required, Burakowski added.

He underlined that these two phrases had to be assessed “together, not separately”.

India doesn’t consider the latest move – that modified Article 370 in the Indian constitution that changes Kashmir’s autonomous status as a bilateral subject with Pakistan, but as an entirely “internal affair”. 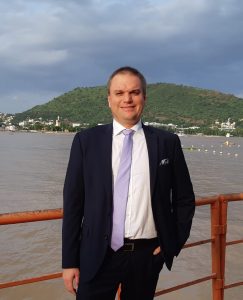 Even as the Polish envoy, a fluent Hindi speaker, is dealing with the latest political flashpoint, he is also getting ready for the launch of the first direct flight between Delhi and Warsaw in 23 years on September 12. It would not just be marked by a business delegation from Poland to New Delhi but also a special visit to Kolhapur – which was a camp for Polish refugees during the Second World War.

Burakowski spoke to The Wire about Poland’s position on Kashmir, relations within the EU and its growing ties with China.

Since Poland is the president of the UNSC this month, its view is important. What is Poland’s position on the removal of special status – modification of Article 370 – of Jammu and Kashmir?

We have expressed concerns over the current tensions between India and Pakistan resulting from the proposed change in the status of Jammu and Kashmir. But Poland believes that the dispute can only be resolved by peaceful means.

We are in favour of peaceful dialogue between India and Pakistan to sort out differences. As a non-permanent member of the UNSC, Poland stands ready if needed to engage in preventing actions impacting security situations. But Poland hopes that both countries can work out a mutually beneficial solution bilaterally.

Is your colleague in New York still considering that the matter could be brought to the UNSC?

I can tell you only what I said. You have to read both the lines – hope for bilateral dialogue and Poland stands ready, if needed, to engage – together, not separately.

What does that mean?

There is some tension and we have some concerns, and we believe that the tensions should be resolved by peaceful negotiations.

What has been Poland’s traditional position on Kashmir?

The traditional position of Poland has not changed. It is still the same. We think that this is of some concern to the peace in the world and this has been always our position.

Poland had helped to get JeM supremo Masood Azhar listed with the UNSC as a global terrorist. Can you throw some light on that?

Definitely, Poland is against terrorism, we are against global terrorism.

How would you describe the current status of the bilateral relationship with India?

It is wonderful. Our trade volume is steadily on the rise. The number of Indians in Poland is growing and the number of Poles in India is also growing. New Polish companies are coming.

What has been the trend economically?

The trade volume stands at $3 billion. The biggest increase took place in 2017. There was a slight dip last year, but the general trend has been towards growth, and I am sure that the direct flight will inaugurate a new era in our relationship.

The direct flight (by LOT Polish Airlines) shows that India is important for Poland. We want more tourists from India. We also want to have more cultural exchanges. We also want to promote our universities. More than 4,000 Indian students are studying in Poland.

We used to have a direct flight from Delhi to Warsaw from 1985 to 1994. Thereafter, both countries were going through very profound economical transformations, when they had other priorities. But now after 30 years of economic success of Poland, we are expanding to other markets and India is, of course, one of the most important in the world.

How can Poland help Indian business navigate a post-Brexit EU?

Poland is a very important member of the EU. If you are in Poland, you have access to the entire EU market. Poland can be a very good hub for Indian business.

How will a no-deal Brexit impact Poland?

I can tell you that we would like the UK to stay (in the EU). But if they are leaving, they will. I think it should be done in such a way that nobody’s interest is harmed. There are more than one million Poles living in the UK, so we are having special ties. British people have always been our friend. We are protecting our citizens and many of them have already expressed concerns about Brexit. We hope to have some good solution.

There has been much talk of estrangement in the EU between West and East European countries on different policies. Do you see this gap widening?

No, I don’t see the widening of the gap. I hope the new European Commission acts in such a manner that it will take into consideration the interest of all the member states.

Poland has been part of China’s initiative in Europe, CEEC (Cooperation between China and Central and Eastern European Countries). How important does Poland consider this grouping?

Poland considers China as a very important trade partner in Asia and we are developing our bilateral relationship. We are part of 16+1, which is soon becoming 17+1 with the entry of Greece. But we count on bilateralism.

China also considers Poland as an important partner in Europe. There are many bilateral common interests. We have a twice-daily cargo train from Chengdu to Lodz. Poland considers the Chinese approach as purely economic. Our relationship with China from the Polish perspective is also almost exclusively economic.