At an emergency meeting of the Organisation for the Prohibition of Chemical Weapons, Moscow sought a joint Anglo-Russian investigation into the poisoning case in the UK. 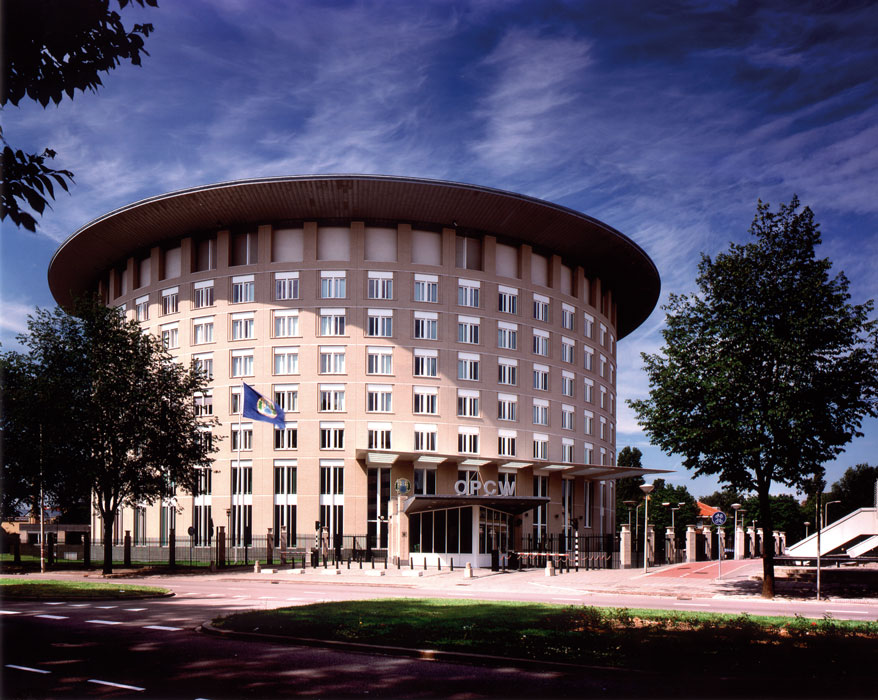 Headquarters of the Organisation for the Prohibition of Chemical Weapons at The Hague. Credit: OPCW

New Delhi: India abstained from voting on Russia’s proposal at the Organisation for the Prohibition of Chemical Weapons (OPCW) for a joint Anglo-Russian investigation into the poisoning of a former Russian double agent and his daughter in the UK by a military grade nerve agent.

Russia’s proposal was rejected on Wednesday by the OPCW’s Executive Council which comprises 41 state parties. OPCW is the international organisation which implements the Chemical Weapons Convention (CWC) that bans the manufacture, storage or use of chemical weapons.

The Russian ambassador had sought a special meeting of the council to “address the situation around allegations of non-compliance with the convention made by one state party against the other state party with regards to the incident in Salisbury”.

The UK has accused Russia of masterminding the poisoning of Sergei Skripal, 66 and his daughter, Yulia Skripal, 33, by a nerve agent which had allegedly been developed by Soviet chemists in an undeclared chemical weapons programme. The UK had requested OPCW’s technical assistance to identify the chemical used in the attack.

However, even as an OPCW investigation is currently underway to identify the ‘poison’, the UK, along with US and other EU countries had expelled over 150 Russian diplomats, which led to a reciprocal move from Moscow.

Russia had proposed that OPCW’s executive council authorise a joint investigation with the UK – a proposal which had earlier been bilaterally rejected by the UK. The British had rejected Russia’s demand for samples to analyse the claim.

Over all, six countries voted in favour of Russia’s proposal, which included Pakistan, China, Iran and Azerbaijan. The Russian drafted joint statement was, however, co-signed by 13 other state parties, including non-EC members. The state parties supporting Russia included Pakistan, Iran, Syria, Cuba, Nicaragua, Venezuela and most of the CIS countries, as per a tweet posted by the Russian embassy to the Netherlands.

Fifteen countries voted against the proposal, which included the US, the UK and EU members. However, a larger chunk of 17 countries abstained. Among the 41 members of the EC, two countries were absent, while one was not eligible to vote.

Explaining India’s position, Indian permanent representative to OPCW, Venu Rajamony said that India had taken note of the allegations related to the Salisbury incident and maintains that “all investigations of alleged use of chemical weapons should be conducted strictly in accordance with the provisions of the Convention”.

Declaring that India would be abstaining, Rajamony urged “that all provisions of the Convention be utilised to address concerns in accordance with the procedures laid down in the Convention, so as to reach evidence-based conclusions”.

“India, as all other countries, should await the outcome of the investigation,” he added at the special meeting.

Rajamony reiterated that India was “against the use of chemical weapons anywhere, at any time, by anybody, under any circumstances”.

Former foreign secretary Kanwal Sibal, who had also been India’s envoy to Russia, says that there is an “implicit” criticism of the stance taken by UK in the Indian statement.

He states that India’s view that all countries should wait for the outcome of the OPCW investigation was implicitly pointing out that unilateral actions taken by the UK, the US and EU were premature.

At the same time, India’s abstention, he stated, was an “explicit” opposition to the Russian proposal for a joint investigation. “We have taken the right position… India has played it safe,” Sibal told The Wire. 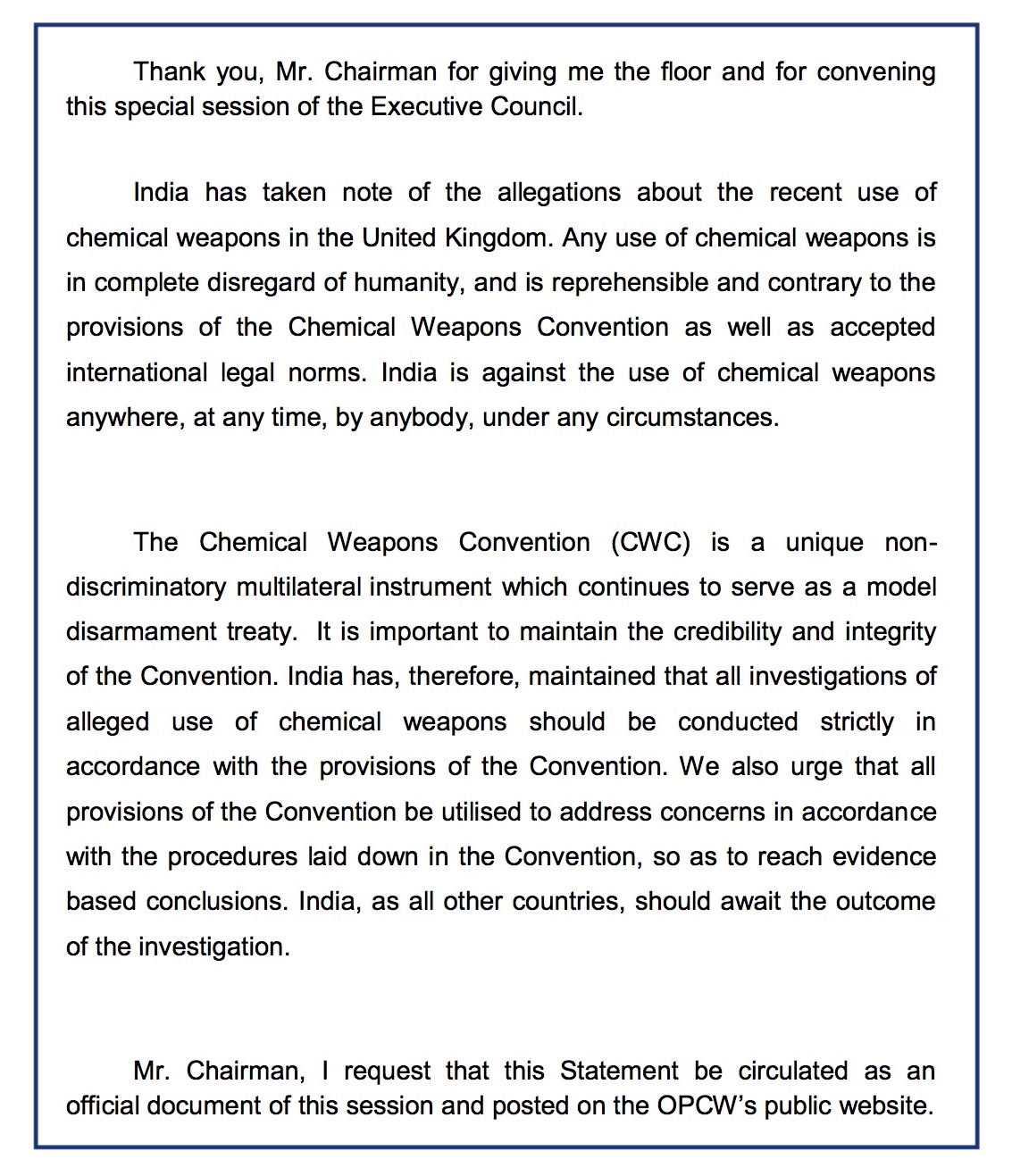 Following the vote, the Russian permanent representative Alexander Shulgin claimed that the large number of abstentions demonstrated that “more than half of the members of the executive council refused to support the US and UK position”.

The British also spun the results to claim victory that Russia got only six votes, rather than the two-thirds margin of 28 votes.

“It shows that many countries around the world continue to share our assessment of what happened in Salisbury and are determined to stand up to Russia’s behaviour,” said British foreign secretary Boris Johnson.

While the statement at the Hague was the first time that India had addressed the latest dispute between the West and Russia, there has been growing concern in New Delhi at the widening estrangement, as it makes Moscow look towards Beijing for support in the international arena.

This concern was also raised by the Indian defence minister Nirmala Sitharaman, who is on a visit to Russia.

Speaking at the Moscow Conference on International Security on Wednesday, Sitharaman said that a key facet of the current international situation is the “continued and rising unpredictability” in relations between major powers, which was both “unprecedented and a matter of concern”.

“The current deterioration of ties between Russia and the West is a reflection of this trend,” she said, adding, “We also see the manifestation of this instability at the manner in which major powers as well as other influential actors have sought to address a range of regional issues and conflicts”.

India’s apprehensions on being caught in the middle of the ongoing West-Russia tussle are already coming true.

India wants to complete the negotiations to buy five S-400 missile defence system worth $4.5 billion from Russia. However, this purchase could attract sanctions under the Countering America’s Adversaries Through Sanctions Act (CAATSA).

This possibility has already been flagged by Indian officials to Washington – and has led the US department of defence to express sympathy.

“We understand India’s concern about this and we are very concerned as well. These sanctions are intended to target Russia – not India,” Joe Felter, deputy assistant secretary of defence for South and Southeast Asia, told PTI.

In an article in Axios, Carnegie Endowment’s Cara Abercrombie said imposing sanctions on India “like penalties the U.S. imposed after India’s nuclear tests in the 1990s, would sour relations”.

“Given bipartisan support for the U.S.–India defense relationship, Congress should grant India waiver authority under CAATSA,” she wrote.