Indian Minister in Pyongyang as North Korea Slams US Again

Just when the Modi government thought it diplomatically safe to pay a visit, sharp rhetoric by North Korea has cast a shadow over the forthcoming Kim-Trump summit. 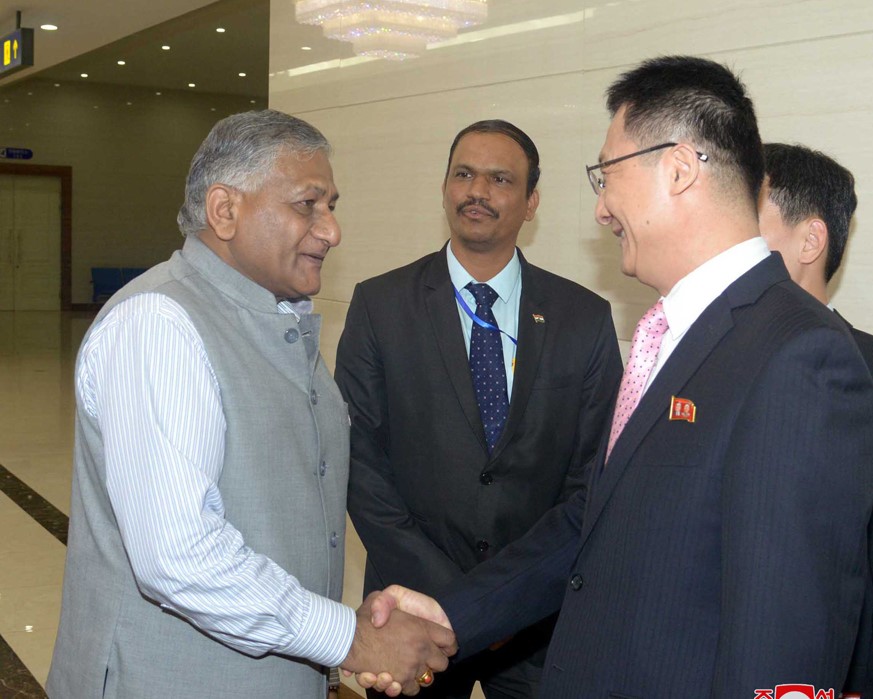 New Delhi: In the highest level ministerial visit from New Delhi in two decades, Indian minister of state for external affairs V.K. Singh is currently in Pyongyang to hold talks with the North Korean leadership and agreed to encourage more people-to-people exchanges to mark 45 years of diplomatic relations.

Even as the Indian minister is in Pyongyang, the much-hyped North Korea-US summit seems to be in danger, with a senior North Korean official stating on Wednesday morning that it has no interest in a meeting if it is based on “one-sided” demands to give up its nuclear weapons programme. Singh’s trip is the first visit by a minister from Indian Ministry of External Affairs to visit North Korea in over four decades and first minister since 1998.

Sources confirmed to The Wire that the minister of state travelled from China and arrived in Pyongyang on Tuesday for the two-day visit. He will hold talks with North Korean counterparts today. It is not yet clear if he will call on North Korean leader Kim Jong Un.

According to an MEA press release, Singh held talks with vice-president of the Presidium of the Supreme People’s Assembly, Kim Yong Dae, foreign minister Ri Yong Ho, culture minister Pak Chun Nam and vice foreign minister Choe Hui Chol. There was no mention of a meeting with Kim Jong Un.

The press note highlighted that the rare visit took place on the 45th year of establishment of diplomatic relations between India and DPRK on December 10, 1973.

Interestingly, India and North Korea “agreed to strengthen people to people contacts through educational and cultural exchange, to mark 45 years of establishment of diplomatic relations between the two countries”.

Besides, both sides explored possibilities of cooperation in areas including vocational education, agriculture, pharmaceuticals, promotion of Yoga and traditional medicines.

During the discussions, North Korean officials “provided an overview of some of the recent developments in the Korean peninsula”.

Singh, as per the MEA press note, reiterated India’s support for the inter-Korean joint peace initiative. However, the note remained silent on the prospect of the upcoming summit between Trump and Kim in June.

He also implicitly raised the matter of Pakistan’s link to the North Korean nuclear programme – a traditional position raised in every statement from South Block related to the hermit nation.

“The DPRK side emphasised that as a friendly country DPRK will never allow any action that would create concerns for India’s security,” said the press release.

Ahead of the visit on Tuesday, the new Indian ambassador Atul Gotsurve presented his credentials to the President of the North Korean parliament Kim Yong Nam, who is also the ceremonial head of state. The ministerial visit had been planned in alignment with warming up relations between North Korea and US with Chairman Kim agreeing to hold a summit with US President in Singapore on June 12. However, the dialling-up of the rhetoric from North Korea on Wednesday seems to have put the Indian side in a piquant position.

Last month when Kim Jong-un travelled to South Korea to hold talks with President Moon Jae-in, India had welcomed the inter-Korean summit and hoped that it would “help in reducing tensions and pave the way for lasting peace and reconciliation in the Korean peninsula”.

In line with all its previous statements on the Korean issue, New Delhi also pointed out that the role of Pakistan’s A.Q. Khan in developing North Korea’s nuclear and missile programme should not forgotten. “We hope that all efforts to find resolution of the Korean Peninsula issue will also include addressing concerns about the proliferation linkages of DPRK’s nuclear and missile programme,” said the MEA press communique.

The highest-level ministerial visit from North Korea in over three decades took place in 2015, when foreign minister Ri Su Yong travelled to New Delhi for a bilateral trip. Following that visit, senior officials had met for foreign office consultations in April 2016 in Delhi. However, there had not been any major contacts over last one year.

In fact, India has been ramping up its rhetoric on North Korea, as demonstrated by the India-US joint statement issued during PM Modi’s visit to Washington in June 2017 to meet US President Donald Trump for the first time. India had been North Korea’s second biggest trade partner after China, but had been imposing sanctions in line with UN Security Council sanctions. In April, India banned all trade with North Korea, except for food and medicine.

However, India had refused to scale down its diplomatic presence in North Korea, as suggested by previous US secretary of state Rex Tillerson in October 2017. “I told secretary Tillerson that embassies of some of your friendly countries should remain there so that some channels of communication remain open. Many times, you may have need to talk…a mutual dialogue may be required to resolve some issues. At least one embassy should be there from your friends. And I believe that he understood this,” external affairs minister Sushma Swaraj had said.

During Tillerson’s visit, the war of words between North Korea and US had been at their peak, with Trump calling Kim “rocket man” and the latter returning the compliment by terming the US president “deranged”. In the last month, there has been a dramatic change in tone, with Trump even calling Kim “very honourable”. US President Trump had been citing his diplomacy with North Korean chairman as his major foreign policy achievement.

But, on Wednesday morning, North Korean state media carried a series of statements which criticised the US for holding military drills with South Korea and its human rights record. The North Korean news agency KCNA carried a statement from first vice minister of foreign affairs Kim Kye Gwan that his country would not go ahead with the summit if US spoke of “Libya-style” denuclearation. “If the US is trying to drive us into a corner to force our unilateral nuclear abandonment, we will no longer be interested in such dialogue and cannot but reconsider our proceeding to the DPRK-US summit,” Kim Kye Gwan said, as reported by Reuters.