India on Monday gave a relatively lukewarm reception to the ambitious infrastructure project unveiled by the leaders of the seven developed countries to rival China’s Belt and Road Initiative. 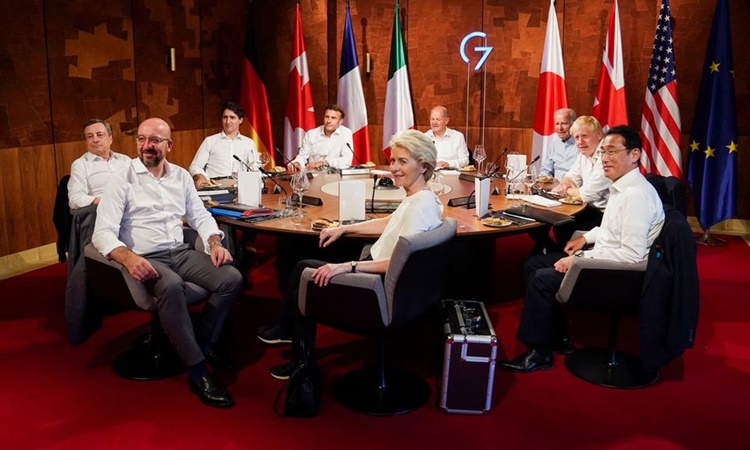 Leaders of the G-7 countries at their summit in Germany. Photo: Reuters

New Delhi: After leaders of the G-7 countries unveiled an ambitious infrastructure project to rival China’s Belt and Road Initiative (BRI), India on Monday gave a relatively lukewarm reception, with foreign secretary Vinay Kwatra stating that it would form a view only after examination of “details”.

At the G7 summit in Germany, leaders of the seven leading developed economies announced details for mobilising $600 billion to build infrastructure in the developing world. China has already made crucial inroads through its flagship BRI initiative in countries around the world, but the West has criticised it for putting a debt burden on the host nations. India too has opposed the BRI.

In the first response from the Indian side to the G7’s proposed Partnership for Global Infrastructure and Investment (PGII), Kwatra told reporters on Monday that it was too early to comment on the project.

“But whether it’s a question of infrastructure or it’s a question of addressing other economic challenges, as I said, [the] prime minister’s observations in both plenaries focused on this part, which is the sustainable solution and the Lifestyle for Environment, actually, captures that part. I think the other initiative that you spoke about, we’ll have to see the details of that for us to be able to speak specifically on its elements,” he said.

According to a White House factsheet, the PGII will be a “transparent” initiative to “meet the enormous infrastructure needs of low- and middle-income countries and support the United States’ and its allies’ economic and national security interests”.

While Kwatra said that India was not aware of the details, the White House factsheet lists an investment in India as one of the flagship projects announced in Germany.

The US International Development Finance Corporation (DFC) will invest upto $30 million in Omnivore Agritech and Climate Sustainability Fund 3, an impact venture capital fund, that aims to build “the future of agriculture, food systems, climate, and the rural economy in India”.

The PGII relaunches a plan that was first revealed as the Build Back Better World (B3W) at the G7 summit in the UK last year.

In fact, the Indian investment announced by the DFC is the second one under this rubric. DFC has also financed the US solar manufacturing company, First Solar, to support its photovoltaic solar module manufacturing facility in Tamil Nadu, India, in the past year.

The Chinese response to the PGII had been to dismiss the Western description of BRI as a “debt trap” and question the motivation for the G-7 scheme.

“They said China’s BRI has led to debt trap. To call the BRI a debt trap is a false narrative,” said Chinese foreign ministry spokesperson Zhao Lijian on Monday.

On PGII, Zhao said that China welcomes initiatives to promote global infrastructure, but opposes their uses for strategic deterrence. “Such initiatives do not have to cancel each other out. What we oppose is moves to advance geopolitical calculation and smear the BRI in the name of promoting infrastructure development.”

He also took a swipe that PGII was a re-packaging of a similar initiative announced last year.

“I also noticed that a year ago, it was also at a G7 Summit that the US put forward the B3W Initiative. The US committed then to developing global infrastructure in a different way from the BRI. Whether it is B3W or any other initiative, the world wants to see real investment and projects that will truly deliver for the people,” he said.