Stating that the constitutional amendment “pre-judges” the outcome, India had put the onus on Nepal to create a “positive atmosphere” for talks. What is not clear is why the border dispute has been hanging fire despite being flagged for resolution through dialogue way back in 2014. 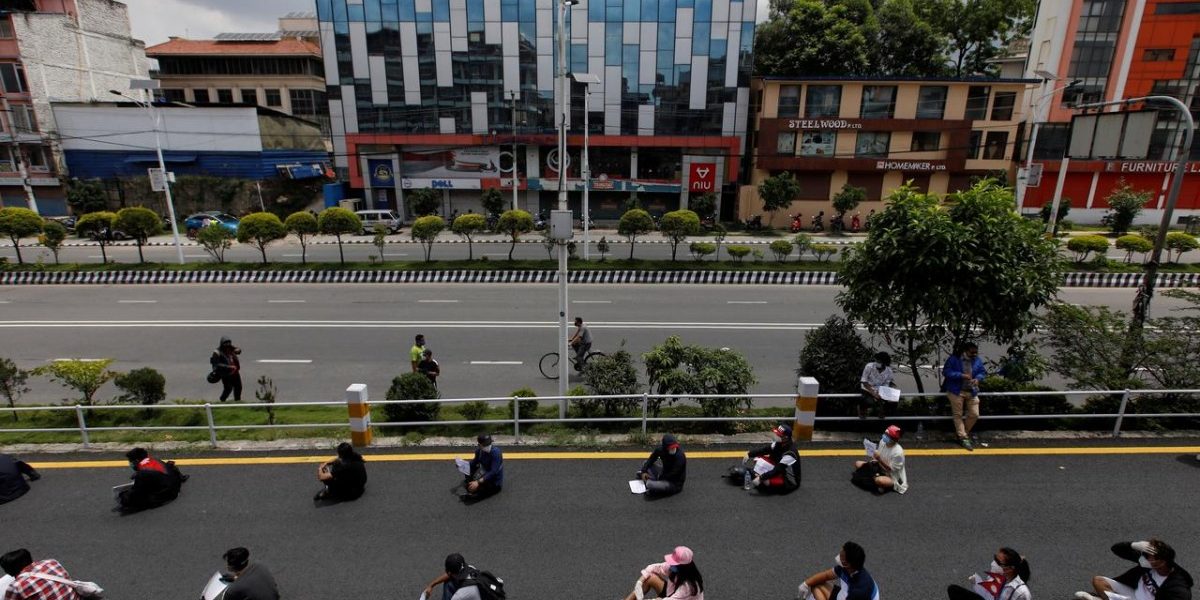 Nepalese youths holding placards maintain social distance as they take part in a protest demanding better and effective response from the government to fight coronavirus as the number of infections spikes, in Kathmandu, June 13, 2020. Photo: Reuters/Navesh Chitrakar

New Delhi/Kathmandu: Even as South Block insists India had extended an offer for a meeting between the foreign secretaries of the two countries, a senior Nepal official asserted that no formal offer was made for talks by New Delhi since last November.

Ahead of Nepal’s parliament completing the legislative procedure for a constitutional amendment redrawing the country’s map this week, Indian sources asserted that the onus was on Kathmandu to create z “conducive atmosphere” for holding talks in the future.

On Saturday, Nepal’s lower house of parliament unanimously approved a constitutional amendment to update the map in the national coat of arms to show areas claimed by India – Kalapani, Limpiyadhura and Lipulekh – within its borders. India had immediately issued a public statement describing the move as “untenable”, and said that it violated the understanding that boundary disputes would be solved through dialogue.

Two days later, on Monday, Indian sources asserted that “even as recently as before bill was tabled” in the Nepali parliament, New Delhi had offered a foreign secretary level phone call or a video-conference and even a bilateral visit. “We wonder why Prime Minister Oli did not tell their people and parliament about the offer,” said the sources.

However, the Nepal government said this was not the case.

“There has been no formal offer of talks from India since it changed its map last November,” Rajan Bhattarai, the Nepal prime minister’s foreign policy advisor, told The Wire. “In fact, since November, we have continuously and consistently proposed dialogue on the border. Our diplomatic mission in New Delhi and other mechanisms have been working actively on this”.

Earlier in the day, defence minister Rajnath Singh stated that India and Nepal had a “roti-beti” relationship. “If there is any misunderstanding between India and Nepal, then we will sort it out through dialogue,” he said.

It was Singh’s announcement of a road to Lipulekh on the India-China border which had led to the latest round of friction and prompted the constitutional amendment bill. “There is some misunderstanding in our neighbour Nepal on the road. The road built by BRO (Border Road Organisation) in Lipulekh is very much in Indian territory,” he told BJP members in a virtual rally.

Since the boundary dispute flared up since last month, Nepal had called for urgent talks at the foreign secretary level on the boundary issue. India’s official response through the MEA spokesperson has been it was ready for dialogue, but that dates would be decided by mutual negotiation after the COVID-19 pandemic subsides.

Now, according to Indian sources, the constitutional amendment bill “prejudges the talks”.

“The onus is now on PM Oli and his government to take concrete steps and create a conducive atmosphere for further talks,” they said.

In Kathmandu, there was flat denial that India had made any proposal to hold talks recently.

In the first meeting of the Nepal-India Joint Commission held on August 21, 2019, the two sides had agreed to hold a foreign secretary level meeting as soon as possible. The same agreement was reached when Indian Prime Minister Narendra Modi visited Nepal in 2014 but the meeting never happened.

India and Nepal share a 1,750 kilometre long land border, out of which 98% has been delineated. The two points of dispute are the Kalapani region in Uttarakhand and Susta in Bihar.

Indian sources claim that the last discussion on this subject had been in 1997-98, “during which we provided all the historical evidence to Nepal”.

After Prime Minister Narendra Modi made his first visit to Nepal in August 2014, the joint statement spoke of the direction given to the foreign secretaries to “work on the outstanding boundary issues, including Kalapani and Susta receiving required technical inputs from the BWG (Boundary Working Group) as necessary”.

However, Indian sources noted that there had been no discussion on this front so far. In fact, sources in New Delhi asserted that it was India which “took the initiative in 2019 and indicated that we are ready to move ahead, but did not get any response”.

Nepali officials say that after India came up with its new political map – ostensibly to demarcate the union territories of Jammu and Kashmir and Ladakh last November – Kathmandu had sent a diplomatic note to India objecting to the Indian move. Though India has always shown the disputed western pocket of Kalapani as being within its borders Nepali misgivings were apparently triggered by the new map dropping the name of the Kali river, which is meant to demarcate the natural frontier under the 1816 Treaty of Sugauli. The Oli government proposed immediate foreign secretary-level talks to discuss this issue, which had led to widespread public protests in Nepal. But India did not respond. A few weeks later, Nepal sent another letter offering a date for foreign secretary-level dialogue. India responded this time, replying that it was ready for dialogue but it again did not offer specific dates. 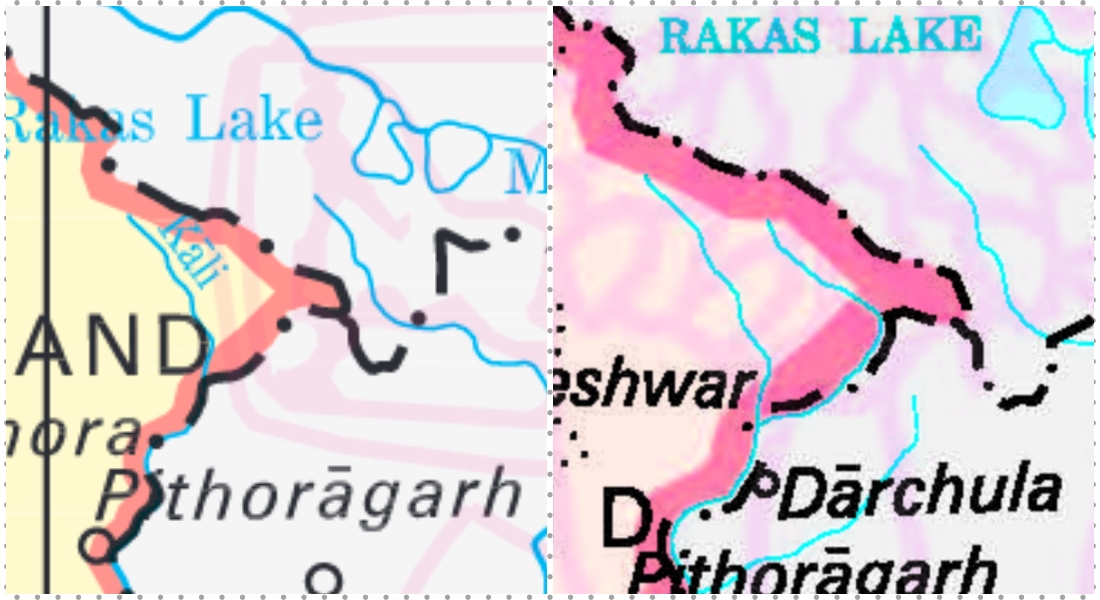 The next phone conversation between Oli and Modi was scheduled for May 18, the date Nepal’s cabinet endorsed the new political map including Kalapani, Lipulekh and Limpiyadhura. “The scheduled phone conversation was cancelled by Indian side at the eleventh hour,” the Nepali foreign ministry source told The Wire.

Speaking with reporters soon after the June 13 constitutional amendment to incorporate Kalapani, Prime Minister Oli said he is now ready to talk to India.

But New Delhi seems to be in no hurry, with the burden of taking the next step to create a “positive atmosphere” put entirely on Kathmandu.

While sources on the Indian side did not spell out what “concrete steps” Nepal needs to take to build a “conducive atmosphere”, the reference to the bill having “pre-judged” the talks is telling.

The constitutional amendment bill was tabled for consideration in the upper house on Sunday. The legislative process provides 72 hours to members to submit any amendment, following which voting will take place. The ruling National Communist Party has the requisite two-thirds majority to pass the bill in the upper house. Thereafter, the president will have to sign the bill to put it into effect.

Last week, the Nepal government announced that a nine-member team of experts had been formed to collect historical facts and evidence related to the disputed area. This was three weeks after the cabinet had approved the new map and after the constitutional amendment bill had been tabled in the lower House of Representatives.

Indian sources have been quick to point out the creation of a team to “collect” evidence raises questions about Kathmandu’s assertion of sovereignty over the disputed areas.

Though Indian Army chief had said last mont that China was behind the Oli government’s assertiveness on Kalapani, the official consensus in India is that Nepal’s recent move is not that much about China, as it is about domestic political calculations. “It clear enough that the new map is for political gains,” said sources.

India’s public silence in the face of Nepal’s offer of talks was largely due to the official assessment that Kathmandu was not “serious”. “The Nepal government’s unilateral act [shows the] intention of PM Oli is to politicise the boundary issue. This does not show any seriousness on their part. It was myopic and self-serving to further their political agenda”, Indian sources say.

However, critics of the recent Indian policy towards Nepal have also accused the Modi government  and the ruling BJP more generally of playing to its domestic political gallery with Uttar Pradesh chief minister Adityanath warning the Nepali readers to “remember what happened to Tibet”.

“Although the dispute in question is a long-standing one, it was, if I recall correctly, raised by Nepal in November last year. Surprisingly, we did not seem to take the matter seriously,” former Union minister Karan Singh said in a statement on Monday.

India should have immediately initiated Foreign Secretary-level talks and then, if necessary, raised them to the level of Foreign Minister or even the Prime Ministers, PTI quoted him as saying.

“Prima-facie, this appears to have been a serious diplomatic lapse, the consequences of which are before us,” Singh said.

COVID a factor too

Apart from the map issue, Indian officials are also upset by Oli’s assertion that “85%” of COVID-19 cases in Nepal were those who returned from New Delhi. “It has been twisted. If you look at Nepali migrants who have returned, it is a small number. This is as per their own will and full knowledge of the government,” sources said,

Indian sources claimed that linking the COVID-19 situation in Nepal to India was part of the “same political motivation” of the Nepali prime minister. They also pointed out that the Oli government has been facing rising protests and criticism over its “inadequate” testing and quarantine measures.

On Monday, Nepal’s tally of COVID-19 cases rose to 6211, after it reported 451 new cases – the highest increase in a single day. In India too, cases have been rising sharply over the past week and India is now ranked fourth in the world in terms of the total number of detected coronavirus infections.