India Leans Towards Russia at UNSC Meeting on Ukraine

Ten countries voted in favour of having an open meeting on Ukraine, while China and Russia opposed. India, Gabon and Kenya abstained. A general view during a meeting of the U.N. Security Council on the situation between Russia and Ukraine, at the United Nations Headquarters in Manhattan, New York City, U.S., January 31, 2022. Photo: Reuters/Andrew Kelly

New Delhi: India largely aligned with Russia at the United Nations Security Council’s open meeting on Ukraine, asserting that “legitimate security interests of all countries” should be taken into account while calling for immediate de-escalation in tensions through peaceful dialogue.

The United States had requested an open meeting on the Russian military build-up at the Ukrainian border, stating that it was an apt topic for the UNSC’s preventative agenda to combat ‘threats to international peace and security’.

The Russians had sought a vote on the decision of the Council president, Norway, to go ahead with the meeting. As per the UNSC working methods, mandatory nine votes were required for the meeting to go ahead as scheduled.

Ten countries voted in favour of having an open meeting on Ukraine, while China and Russia opposed. India, Gabon and Kenya abstained. In this context, an abstention is primarily viewed as having the same impact as a negative vote, as it voids a positive vote required to pass a procedural motion.

For the last three months, the US, the UK and European nations have been claiming that there was a possibility of an imminent Russian invasion of the former Soviet republic, Ukraine. Their argument was based on Russia having amassed military troops and equipment on the Ukrainian border over several weeks.

Russia has consistently denied that it plans to invade Ukraine. However, Moscow also sought guarantees from the US and the west that Ukraine would not be offered membership of the trans-Atlantic military alliance, NATO (North Atlantic Treaty Organisation). Last month, the US refused to accept the Russian demand on withdrawal of NATO from eastern Europe and of not admitting Ukraine as a member. 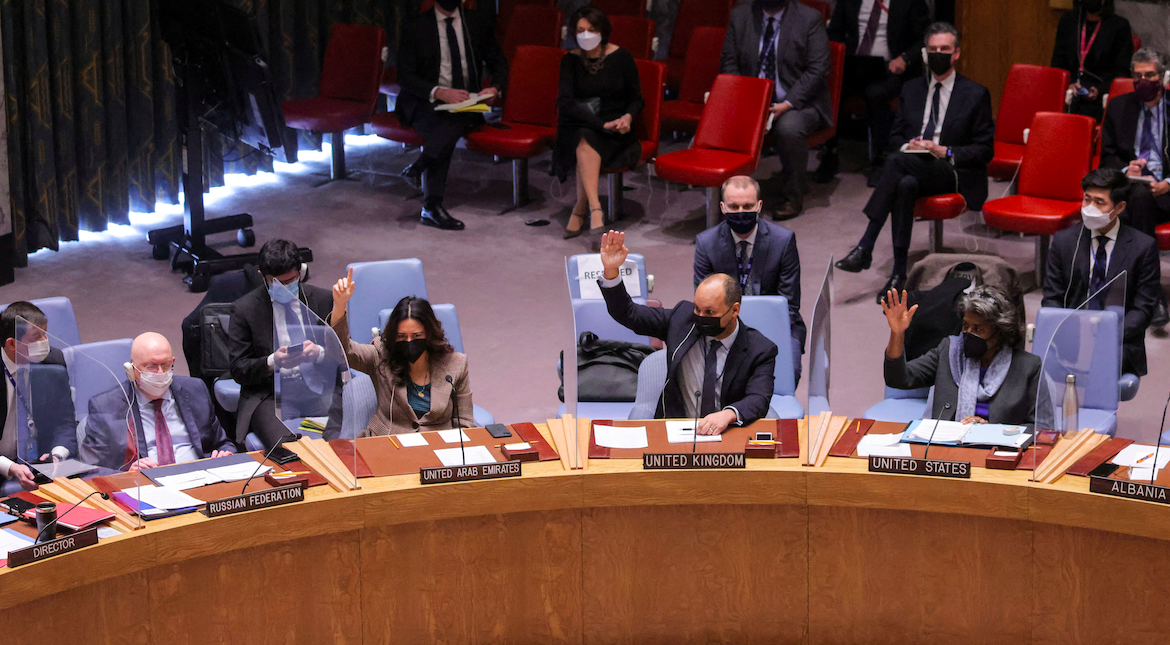 Diplomats from both countries clashed at the meeting, with the US asserting that Russia’s action strikes at the heart of the UN charter. Russia accused the US of creating an imaginary crisis. The Russian representative even drew a parallel with Washington’s reasoning for toppling Saddam Hussein based on ‘evidence’ of weapons of mass destruction in Iraq.

India had, for the first timem responded last week to the crisis, which observers had termed as the lowest point in the US and Russia since the end of the Cold war. “We call for a peaceful resolution of the situation through sustained diplomatic efforts for long term peace and stability in the region and beyond,” MEA spokesperson stated on January 28.

At the United Nations Security Council, India’s statement was much more elaborate – and unambiguously sided with Russia’s national anxieties over Ukraine.

“India’s interest is in finding a solution that can provide for immediate de-escalation of tensions taking into account the legitimate security interests of all countries and aimed towards securing long term peace and stability in the region and beyond. We have also been in touch with all concerned parties,” said India’s permanent representative to UN, T.S. Tirumurti, in New York on Monday.

Stating that diplomatic dialogue was the need of the hour, Tirumurti welcomed talks underway under the Minsk agreement and the Normandy format. “Quiet and constructive diplomacy is the need of the hour. Any steps that increase tension may best be avoided by all sides in the larger interest of securing international peace and security,” he said.

The mention of “legitimate security interests of all sides” was a recognition that Russia also had security concerns over the presence of NATO in its neighbourhood. Further, there was no mention in the entire Indian statement about the Russian military build-up at the border, which has been cited as the trigger for the current crisis by the west. India also urged all parties to work towards “full implementation of the ‘Minsk Package’.” While Russia accused Ukraine of holding up the implementation of the February 2015 deal for implementing the Minsk agreements, Kyiv, backed by the US and Europe, has accused Moscow of inciting separatists in Donbass and illegally annexing Crimea.

“Flowing from the recently concluded meeting in Paris under the Normandy format, we also welcome the unconditional observance of the July 2020 ceasefire (in Donbass) and reaffirmation of Minsk Agreements as the basis of work under the ongoing Normandy format, in particular, commitment of all sides to reduce disagreements on the way forward,”  noted Tirumurti.

The ‘Normandy format’ consists of a dormant quadrilateral group of  France, Germany, Russia and Ukraine, which was revived by a meeting in Paris on January 26.

Explaining India’s interests in the ongoing crisis, Tirumurti pointed out that Ukraine hosted a sizeable Indian community. “More than twenty thousand Indian students and nationals live and study in different parts of Ukraine, including in its border areas. The well-being of Indian nationals is of priority to us,” he said.