Menon: 'It is Natural that Smaller Neighbours like Lanka Will Play India Against China' 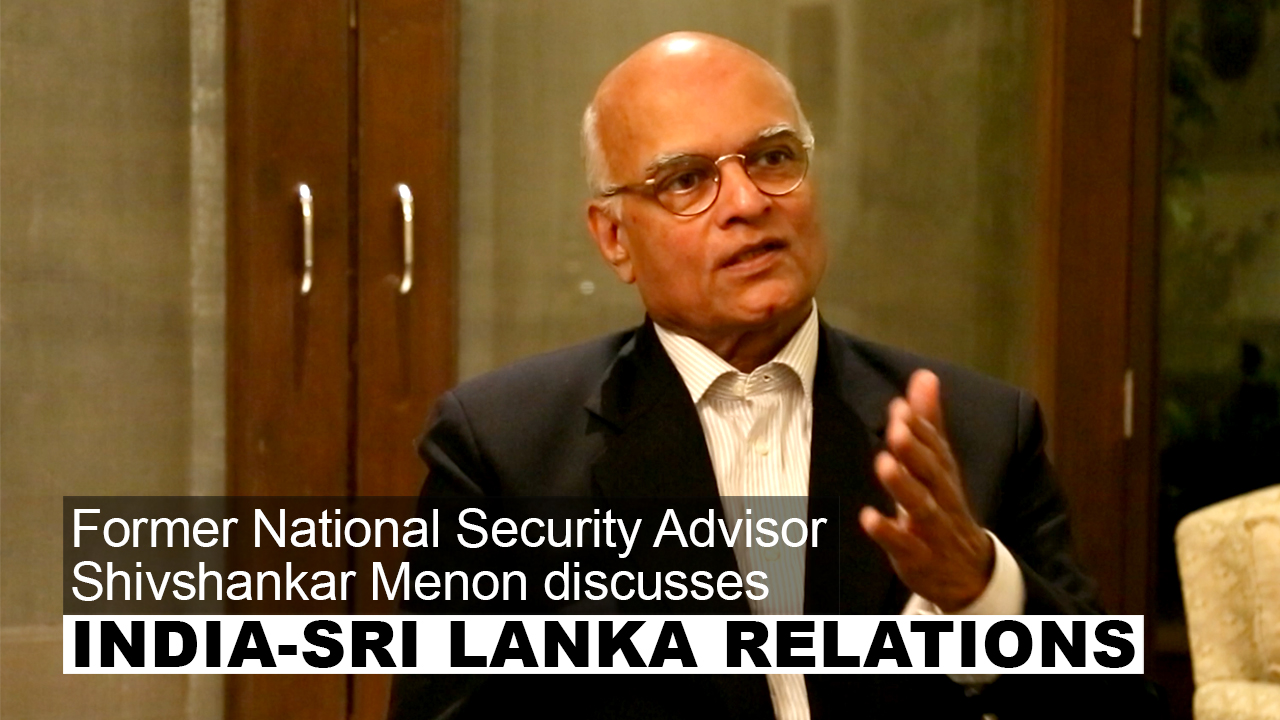 Watch the video or read the transcript

Siddharth Varadarajan: I want to raise an issue of internal politics vis-à-vis another foreign policy question that you deal with in your book, which is India-Sri Lanka relations. You have an excellent chapter on the end game as it evolved and the kind of questions India was confronted with – you have an increasingly bloody civil war where all rules of war are being flouted, there’s a risk of external powers getting sucked into it and India, within that context, makes various choices. To what extent were those choices the product of internal political compulsions as well – to what extent were those choices made in the teeth of great internal political difficulties? Because we know that the DMK [Dravida Munnetra Kazhagam] government in Tamil Nadu, you can say, the state as a whole… I lived in Madras during those years, the closing stages and this was a big emotive issue. How much do you think domestic politics weighed on the UPA’s [United Progressive Alliance] decision-making process?

Shivshankar Menon: I think sentiment was strong but not just in Tamil Nadu, I think in India itself because Indians are fundamentally moral in the way they look at these things. We did have a strategic interest. That was the whole problem – how to reconcile your strategic interest in what is essentially an unsinkable aircraft carrier 14 miles off your coast, and your humanitarian interest in the fate of people and also your domestic political interest and so on. So it was really a balance of all these factors. Whether we got it right or not, you know, frankly, history will say and those who were involved, I think will always wonder could we have done more one way or the other. This is not a question we can ever answer. The reason why I put it all down was just to show how difficult it is to make some of these choices. You know historians, journalists have 20-20 hindsight and can always second guess and say you should have done this and this would have happened and you know we could have sorted it out, but on an issue like that, I think if you look at it, it’s really a complex issue. There’s no right or wrong, black or white, true or false. It’s not a binary choice here, in any of these situations and you’re operating in a fog where you don’t actually know everything that’s happening. So you do the best you can. It’s all a mini-max. You minimise harm, maximise gain and go along. That’s what I want to convey.

In fact, if you look, that’s the theme that really runs through the book. Therefore, I think you need to give government some room when you judge it because it has its reasons and it knows more than most of us do outside. I hope [my book] creates some understanding of the complexity of what the government has to do.

SV: Regardless of decisions, the choices, that the government made finally during the Sri Lankan civil war end-game, the fact is that the war ended, and in the post-war scenario it was the Chinese that had a strengthened hand. Their relationship with the Rajapaksa government –

Menon: That’s politics and that’s something I think you have to deal with. As China rises, China’s presence in your neighbourhood is something you’ll have to deal with. In the Sri Lankan case, actually we tend to forget history very quickly. You remember the fuss in India in 1967 about the rice-rubber pact between Sri Lanka and China? Throughout the war, because we were in no position to supply weapons and so on, Sri Lanka bought weapons from China, primarily. They got a few from other places but basically they equipped their army and so on from China.

SV: Which they then used to extract economic and strategic rents.

Menon: So that’s a relationship there and I think we should get used to the idea that all our smaller neighbours, if they see India-China rivalry, will find it useful to deal with us in order to get things from the Chinese and deal with the Chinese in order to get things from us. I mean, I would do it if I were a smaller neighbour and I would maximize my gains. So I think we should be ready for this. I don’t think we should aim for exclusivity or some zone where people only deal with us… Why would they put themselves in that position? They’re sovereign states, independent.

SV: There was a delicious moment at a conference in Delhi last year, the ‘Raisina Dialogues’, where you had, on one platform, I think it was the Indian foreign minister Sushma Swaraj or maybe [foreign secretary S.] Jaishankar was there, along with important leaders from Sri Lanka, Bangladesh and Afghanistan. This was the conference where India for the first time, publicly, articulated a negative view about [China’s] One Belt, One Road and said how this is in some way a unilateral gesture and is not helpful. The smaller neighbours of India all essentially piped up to say, well we quite like the idea of One Belt, One Road! I know this takes us back to China in a way but in so far as this is also a regional question, surely India needs to be more balanced in the way it evaluates the kind of connectivity that China is creating, to look at it more as an opportunity, perhaps, and less as encirclement.

Menon: I think; you know infrastructure is infrastructure. As long as it’s open to everyone. I think we should use what’s in our interest, what helps us to pursue our goals and where it directly affects our sovereign interest like parts of the CPEC – what China is doing in Pakistan Occupied Kashmir. Those I think we have a legitimate right not just to object to but to see what we can do about it, but for the rest of it, most roads, pipelines – these are all value neutral. As long as they’re open to everybody and there’s no other conditions attached to them – that, you know, only my friends can walk on this road and so on – I think those are things we should actually look at and see where we can use them. In practice, we actually do it. If you look at it, the Chinese built terminals in Colombo port – they survive on Indian transhipment; on transhipment from Indian goods to the rest of the world and from the rest of the world to India because our ports lack the capability. So it’s actually providing a service to us which is useful to us. I find we tend to do that in reality but I don’t think we’ve quite got our heads around this – this idea of interdependence, of actually using infrastructure that other people might build, and thereby also being more confident of the uses they’re being put to.

SV: You focus on the end game, of course, of the Sri Lankan civil war. But there were choices that India made at the beginning of the game too – in arming and financing the LTTE. Is there a danger that other regional problems – Pakistan, Balochistan in particular, an issue that we have now begun to raise and articulate publicly – might get over-on played? Pakistanis have made allegations against India in the past…

SV: As of the Rohingyas in Myanmar, but we don’t hear much about that.

Menon: It gives me a certain pleasure to see us talking about Balochistan. When we did in Sharm El Sheikh­­–

SV: Well, I was there with you when everybody attacked you!

Menon: But now I’m happy to see that everybody is singing the same tune! But frankly, I think it is very hard to comment, without knowing what’s actually going on.

Next: Menon on the India-US nuclear agreement

Menon: ‘Not Talking Actually Empowers Those in Pakistan Who Mean India Harm’

Menon: Peace Prevails but the Old Modus Vivendi With China is Under Stress

Menon: The Policy of No First Use of Nuclear Weapons Has Served India’s Purpose