This happened at an Indian and Indonesian experts meeting three weeks before Modi landed in Jakarta. 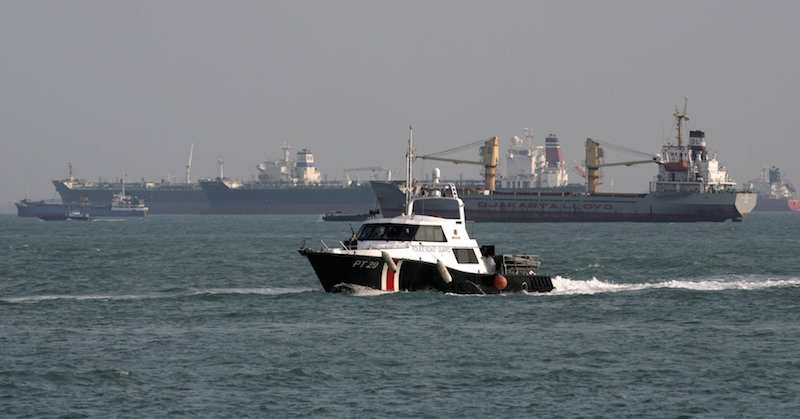 A Police Coast Guard vessel patrols the shipping lanes near freight ships off the coast of Singapore in this March 4, 2010 file photo. Credit: Reuters/Vivek Prakash/Files

New Delhi: About three weeks before Indian and Indonesian leaders sat down for talks in Jakarta on Tuesday, Indonesian experts had explained to their Indian counterparts that New Delhi’s quest to join the Malacca Strait Patrol (MSP) was “not feasible”.

The joint statement issued after discussions between Indian Prime Minister Narendra Modi and President Joko Widodo on Tuesday described the aim of the expert-level meeting on May 10 in Bali was to “explore ways in enhancing strategic technical cooperation on maritime security”.

Multiple sources have confirmed to The Wire that the sole item on the agenda of the expert-level meeting was to discuss India’s suitability to become a full member of the MSP.

Established in 2004, the MSP is a quadrilateral arrangement between Indonesia, Malaysia, Singapore and Thailand for intelligence exchange, coordinated air (eye-in-the-sky) and sea patrol through the vital straits.

The narrow channel of water, which stretches for around 600 nautical miles, accounts for 25% of world trade. It is also one of the world’s energy chokepoints, with a transit volume of over 16 million barrels per day of crude oil and petroleum products. About 40% of India’s trade also goes through the straits.

A highly-placed diplomatic source said that whenever India had brought up the issue of joining the MSP with Indonesia in the past, Jakarta had stated New Delhi did not either understand or delineate its role clearly.

Sources said the May 10 meeting was the first time that technical experts talked directly to help Indonesia comprehend the scope of Indian ambition. Both sides quickly realised that the Indian side had not fully come to grips with the nuts and bolts of the MSP.

Constructed as a “loose mechanism”, MSP members do not even conduct joint patrols. Instead, they take part in “coordinated patrols”, with each country staying in their own territorial waters.

When the Indian experts indicated that the Indian Navy expected to hold patrols inside the straits, the Indonesians pointed out that they never ventured into Malaysian or Singaporean waters.

“The littoral states are very cautious when dealing with patrol among themselves, let alone with a third state,” said the source.

Indonesia reiterated the legalistic objection that only states bordering the straits used for international navigation could patrol the straits under the United Nations Convention on the Law of the Sea (UNCLOS). This was a reference to Section 37 of the UNCLOS, which says that non-littoral states can move from one part of the high sea to another through a strait in a “continuous and expeditious passage”. A patrol route would be circuitous, rather than “proceed without delay” in a straight line – and therefore preclude non-littoral states from the region, it is argued.

The ‘eye-in-the-sky’ aerial surveillance was also a subject of misconception. “It doesn’t involve respective aircrafts patrolling the length of the straits. Rather, officials from the four states board the same aircraft for conducting aerial patrol. On the other hand, Indian experts seemed to suggest that the aircraft from the Naval Base can go around the straits,” said the source.

The Indian delegation restated talking points that as a “funnel state”, New Delhi already playing a key security role in the straits and formal full membership would enhance the “collective security” of all regional members.

At the end of the meeting, the Indian experts had both a better understanding of the MSP mechanism and the realisation that becoming a full member was probably a impossible dream.

The Indonesian side reportedly explained that there were two tests to determine the probability of a non-littoral state joining the MSP. The two questions were whether the participation of the third state would affect the sovereignty of littoral states and provoke any other ‘user state’.

From Jakarta’s perspective, the answer is yes to both the test questions. “The Indonesians bluntly said that if India was asking for their navy to patrol the straits, then it would impinge on the sovereignty of the littoral states,” said sources.

There was a reference to both the tripartite Batam joint declaration and Jakarta statement in 2005 that reaffirmed the primacy of the littoral states and cognisance of their sovereignty in the Straits of Malacca. Prime Minister Narendra Modi and the President of Indonesia Joko Widodo attend the kite flying session, during the inauguration of the India-Indonesia Kite Exhibition, in Jakarta, Indonesia on May 30, 2018. Credit: PIB

China was, of course, the elephant in the room during the discussions on May 10.

But the China factor is also the reason why Indonesia is shy of roping in India. “It’s simple. If India is allowed in, China will follow,” said an ASEAN diplomat.

With the two question test, the Indonesia experts signalled to the Indian side that full membership was out of the question.

“They (India) now understand that joining MSP is not feasible,” said the senior diplomatic official.

Indian membership of the MSP would require a consensus. Both Singapore and Thailand have told India that they will go by the prevailing ‘consensus’, with Malaysia also conveying a similar message. It was also made clear that the consensus-building had to start from Indonesia. “Right now, there is no consensus,” said a senior diplomat from a major Southeast Asian country.

The May 30 joint statement instructed the technical experts “to expedite the process in identifying the scope of strategic cooperation of mutual interest”.

Explaining the next steps, a senior official said that New Delhi will now have to undergo an internal consultative process to re-orient its proposals before the next meeting hosted by India.

From focusing on the MSP, India will likely pivot toward bilateral proposals to enhance maritime domain awareness and information sharing. There could also be an exploration of trilateral cooperation with Thailand.

India has a robust defence relationship with each of the four MSP members. The Indian navy conducts holds bilateral coordinated patrols with Thailand and Indonesia, and there are regular military exercises with Singapore and Malaysia.

Sources said the Malacca straits patrol issue “did not figure in the talks (between the Indian prime minister and Indonesian president) directly but maritime cooperation was discussed”. The Indian side had also not raised the matter during the high-level bilateral discussions in Delhi during Widodo’s visit in January this year.

Indonesia is not only the largest state in the region, but has been fiercely resistant to the presence of foreign state actors in the Malacca straits for historical reasons.

Sovereignty over the Malacca straits is interlinked to independent Indonesia’s early quest for the status of an archipelagic state in international law, which would secure internal waters between the islands from foreign interference.

Even when Indonesia endorsed clubbing the two straits of Malacca and Singapore together and announced joint control with Malaysia in 1971, experts said that it was seen as a move to restrict the “strategic mobility” of ‘user states’ like the US, China and Japan.

In the aftermath of 9/11, the US requested India to escort supply ships through the straits. The first such escort took place in April 2002. It was projected as the Indian Navy’s coming of age as a regional maritime power. Behind the scenes, the regional capitals were unhappy. “There were lots of annoyed officials. The memory lasted for a long time that India escorted with the US, especially when the countries around the straits had deep concerns,” said an Indian government official who had been previously posted in Southeast Asia.

When Indonesia (and Malaysia) reacted with outrage to the US-backed Regional Maritime Security initiative in 2004, India had already learned its lessons and kept a distance. However, India is a member of the Japan-sponsored Regional Cooperation Agreement on Combating Piracy and Armed Robbery against Ships in Asia (ReCAAP) which aims to improve the reporting of piracy and other incidents at sea.

Indonesia and Malaysia have refused to join ReCAAP over an objection of the location of the Information Sharing Centre in Singapore and traditional resistance to the presence of foreign players.

A diplomat from a Southeast Asian country told The Wire that it made sense for India to engage more intensively with the Indonesians, “as out of all the parties in MSP, they are most concerned of the potential implications on sovereignty”.

During his first state visit to Indonesia, Modi said that both countries were maritime neighbours and strategic partners with similar concerns.

Announcing that India-Indonesia ties were being upgraded to “comprehensive strategic partnership” with annual summits, Modi asserted, “It is our duty to ensure the safety and security of the maritime routes. It is also important for protection of our economic interests. In today’s changing Indo-Pacific region, ours is a very special geo-strategic location”.

He touted the complementarity of India’s ‘Security and Growth for All in the Region’ (SAGAR) project and Widodo’s Global Maritime Fulcrum policy.

Following the talks, a separate statement on “Shared Vision of India-Indonesia Maritime Cooperation in the Indo-Pacific” was issued. The bilateral document advocated a “free, open, transparent, rules-based, peaceful, prosperous and inclusive Indo-Pacific region, where sovereignty and territorial integrity, international law, in particular UNCLOS, freedom of navigation and overflight, sustainable development and an open, free, fair and mutually beneficial trade and investment system are respected”.

Indonesia is not a party to the South China Sea dispute, but there had been serious clashes between security personnel and Chinese fishermen in the waters around Natuna islands in 2016. Last year, Indonesia renamed part of the waters in its northern EEZ as North Natuna Sea to emphasise its sovereignty.

Both leaders also announced a joint task force will be established to develop port infrastructure at Sabang in the Andaman sea.

Speaking to reporters, MEA secretary (East) Preeti Saran said that there had been discussions around building infrastructure like seaports and airports. However, there was no discussion about access of Indian naval ships to Sabang port.

Fifteen inter-governmental agreements were signed, which included the renewal of cooperation on defence, outer space, railways and health.