If India and Indonesia agree to a new EEZ boundary line, there will be a particular area where the seabed may belong to India but water column to Indonesia.

New Delhi: When Indian Prime Minister Narendra Modi and Indonesian President Joko Widodo sit down for talks this week, a likely outcome could be the green-lighting of negotiations that could see Jakarta asking for a slightly bigger bite of the Indian Ocean.

The Indian prime minister will be arriving in Jakarta on Tuesday, May 29, for a three-day visit, where the maritime links between the two countries will be emphasised. 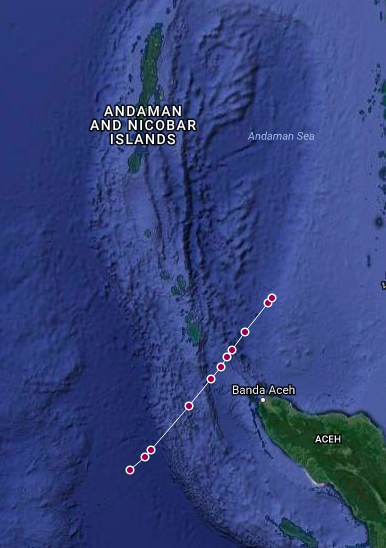 Continental shelf boundary between India and Indonesia based on 1974 and 1977 agreements. Credit: Google Maps

However, there is now a push from Jakarta to sign a separate agreement to delimit the exclusive economic zone (EEZ), to allow for stronger defence against illegal poaching and transhipment.

“We agreed on an agreement on the continental shelf in 1974. At that time, EEZ did not yet exist. After UNCLOS, EEZ was born, and we need to delimit it,” Damos D. Agusman, director general for legal affairs and international treaties, Indonesian Ministry of Foreign Affairs, told The Wire.

Under international law, continental shelf and EEZ are two separate maritime zones. The continental shelf refers to the seabed as it extends from the land towards the ocean, while the EEZ delineates the water body itself.

A state’s economic rights on its continental shelf are for non-living resources, like mining. However, the EEZ, a creation of the 1982 UN Convention on the Law of the Sea, encompasses both non-living and living resources, thereby ranging from oil drilling to fishing rights.

Last year, the technical teams met for the first time, where both sides agreed on the need for a new agreement for the exclusive economic zone. However, officials also discovered that there was disagreement on the way to go forward.

“We have started (negotiations) last year, but had different views on the scope. India viewed that the negotiation only to extend the existing line to undelimited waters. Indonesia asserts that the existing line is only on the continental shelf. We need to draw EEZ line in the same areas,” said Agusman.

He was in India last month and held informal discussions with his counterpart in the Indian Ministry of External Affairs. The next round of talks is expected to be held in August.

In Jakarta this week, this could feature in the bilateral document released after formal talks between Prime Minister Modi and President Widodo. The joint statement would likely have a paragraph acknowledging the negotiations of the EEZ boundary, with a guidance to reach an agreement soon, as per diplomatic sources.

India has signed maritime boundary agreements with all its neighbours, except Bangladesh and Pakistan. The boundary question with Bangladesh was settled via international arbitration in 2014. With Indonesia and Thailand, the maritime agreement specifically refers to the seabed or the continental shelf, while the rest of the pacts only mention a single maritime boundary which is both the EEZ and CS line.

“Negotiations are less complicated if there is a single maritime boundary which includes both the continental shelf and the EEZ, since, firstly, even though they are mentioned in two different articles of the Convention, both Article 74 and 83 stipulate that delimitation shall be effected by agreement ‘in order to achieve an equitable solution’. Secondly, it is much easier to keep maps as there is only one line,” said Narinder Singh, former MEA additional secretary (legal and treaties).

With Indonesia, it could be the first time that India’s EEZ boundary is different from the continental shelf line.

I Made Andi Arsana, an Indonesian expert on the law of the sea, told The Wire that Indonesia’s claim was not exactly the same as the continental shelf, “but not so much significantly different either”.

If India and Indonesia agree to a new EEZ boundary line, there will be a particular area, where the seabed may belong to India but water column to Indonesia. This could potentially create problems in the implementation of economic rights, but under international law, it is sound. 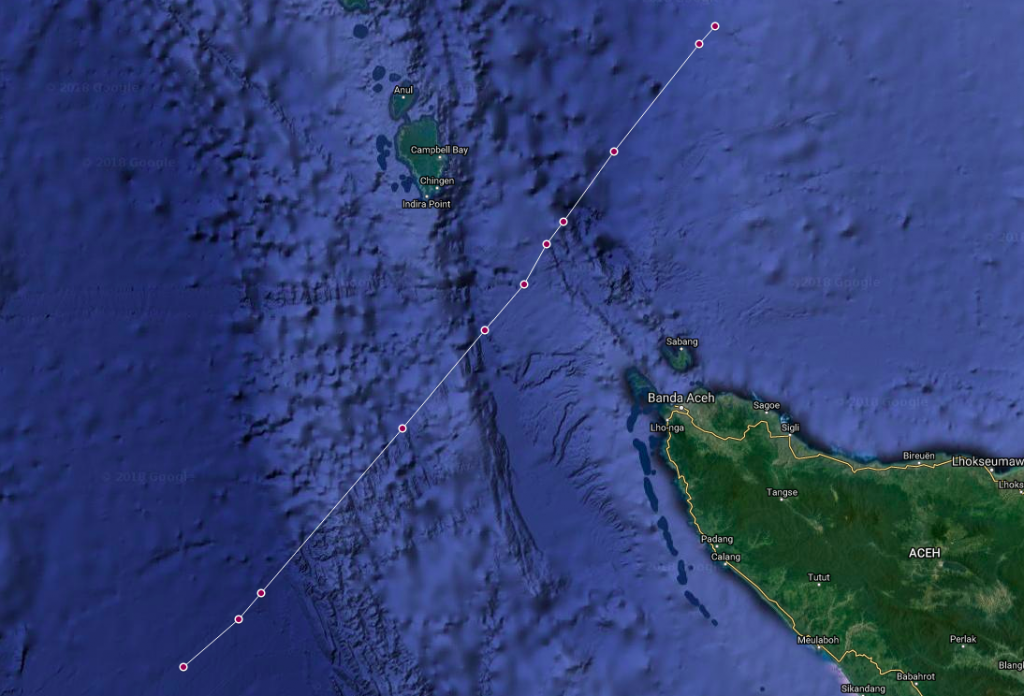 Continental shelf boundary between India and Indonesia based on 1974 and 1977 agreements. Credit: Google Maps

“The law of the sea says that delimitation of EEZ between states should achieve an ‘equitable solution’. The meaning of this is very wide… What we have, may be impractical or unpragmatic, but legally viable,” said Arsana, who was also a member of the India-Indonesia Eminent Persons Group.

The 1974 continental shelf line between India and Indonesia is “more or less based on the equidistant” principle. As per this concept, the maritime boundary should be equidistant from the baselines of neighbouring countries. The ‘baseline’ is defined under UNCLOS as “the line from which the seaward limits of a state’s territorial sea and certain other maritime zones of jurisdiction are measured”. 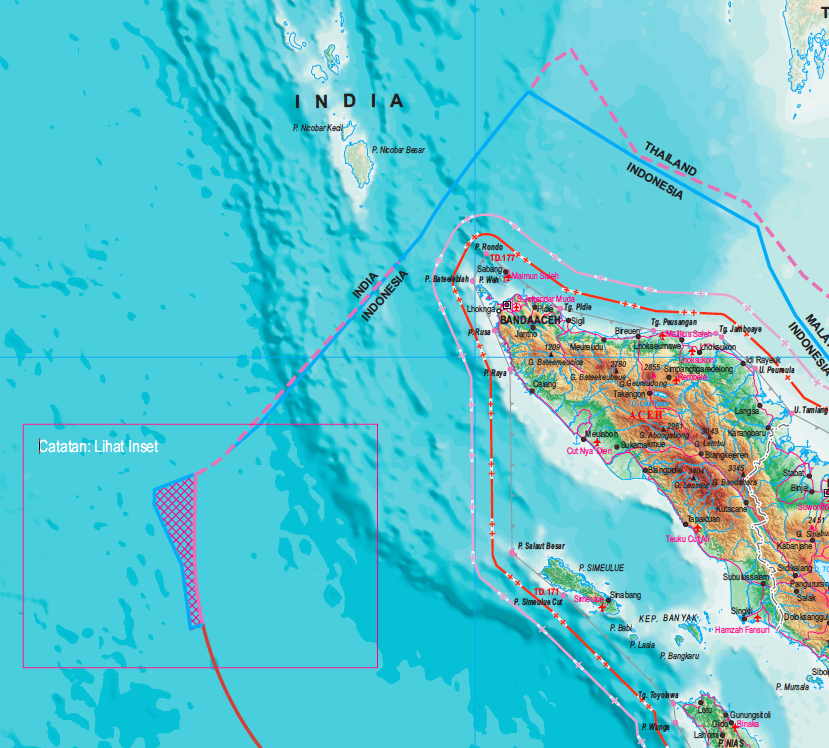 A detail from Indonesia’s official map showing the limits of its continental shelf and projected EEZ vis-a-vis India. Credit: big.go.id

Arsana noted that while ‘baseline’ for India was synonymous with its coastline, Indonesia’s baseline is based on the special provisions allowed for archipelagic states. Since the concept of archipelagic states evolved only in the 1982 convention, the calculation of the EEZ based on this special baseline was “one of the reasons” for the relatively minor divergence of the Indonesian claims from the existing continental shelf boundary, he said.

Indonesia has signed EEZ agreement with the Philippines, Australia and Papua New Guinea, with negotiations pending with Malaysia and Vietnam.

“In the case of Australia, the line dividing the water column is different from the seabed,” said Arsana, a professor at the Universitas Gadjah Mada’s Department of Geodetic Engineering.

Indonesia has proposed a new EEZ line to Malaysia which is different from the continental shelf boundary. Malaysia has suggested the old line.

Indonesia’s concerted move to clarify its maritime boundaries, according to Arsana, is part of its re-orientation towards the oceans under the Global Maritime Fulcrum policy.

“The top priority is to clarify our boundaries so that we can optimally use our resources,” he said.

The Indonesian government estimates that the country suffers losses worth $20 billion annually from illegal fishing.

Since 2014, the Indonesian government has implemented an aggressive policy of destroying foreign fishing vessels found to be illegally fishing in its waters.

In 2016, Indonesia naval forces had clashed with the Chinese fishermen in the waters around Natuna Islands. It even named that part of its EEZ, which was within China’s nine-dash line in South China Sea, as North Natuna sea.

This policy of destroying hundreds of foreign-flagged fishing vessels has apparently made the fisheries minister, Susi Pudjiastuti as the most popular member in the Indonesian cabinet.

“We can’t say if someone has stolen our fish if we can’t tell whether the foreign ship has moved into our part of the EEZ,” said Arsana.

The India-Indonesia joint statement issued on May 30 said that Indian Prime Minister Narendra Modi and Indonesian President Joko Widodo agreed that “mutually acceptable solutions on the delimitation of maritime boundaries between the two countries should be based on the principles of international law including the 1982 United Nations Convention on the Law of the Sea”.

They also “reaffirmed their continued support to the technical meetings and instructed the technical team to expedite the negotiations.”