In Kathmandu's Support for BRI, an Old Story of India Losing Ground in Nepal

As the Doklam stand-off continues, is Nepal set to make another foreign policy shift away from India and towards China, as it did in the 1960s?

Commentators have argued that Nepal joining the Belt Road Initiative signals Nepal’s willingness to move away from the Indian ‘sphere of influence’. Credit: Reuters

The Araniko Highway that connects Kathmandu to Kodari and onwards to Tibet, did not encourage dreams of multi-laned container traffic flowing down even before the 2015 earthquake. Post the quake, China closed the route after massive landslides in Tibet, leaving only one road that connects Kathmandu to Tibet – the Rasuwagadhi highway, built upon an old trade route that connected Nepal to Tibet via the Kerung pass. It was through this highway – still under construction in most sections in Nepal, and perhaps the most affected highway during the quake – that petroleum arrived in Kathmandu in 2015 during the infamous Indian blockade. It is also this highway that will connect Nepal to the much-flaunted Chinese Belt Road Initiative (BRI), with the Chinese interested in building a railway network up to Kathmandu itself.

With Nepal joining the BRI, commentators in both Nepal and India have argued that the move signals Kathmandu’s willingness to move away from the Indian ‘sphere of influence’. With India and China now locked in a stand-off in Doklam, commentators are also asking what this means for smaller nations like Bhutan and Nepal to be in the midst of two clashing giants. Can the ‘China card’ – the most valuable asset of Nepali leaders, from Bhimsen Thapa to K.P. Oli – work any more in the face of an aggressive China and an equally assertive India?

In the long view of history, it is extremely intriguing that Nepal’s hopes from BRI and the accruing benefits from infrastructural development rests on a highway. But this is not the first time this has occurred. In the early 1960s, the Araniko Highway was at the centre of a similar foreign policy exercise led by the autocratic King Mahendra. At that time too commentators had argued that Nepal’s foreign policy tilt towards China had become apparent, while nationalists in Nepal lauded the king for taking the country away from the Indian dependence.

Reaching out to China

In September 1961, King Mahendra had embarked on a 17-day state visit to China, where he was feted as an ‘esteemed friend of the Chinese people’. Mahendra had carried out his royal takeover the year before, and Indian Prime Minister Jawaharlal Nehru was not happy with this new development. As much as Nehru had prevented B.P. Koirala from leading the government in the aftermath of the 1950 movement, he acknowledged Koirala’s government in the Indian parliament in December 1960 as “the first time Nepal had some order of government which was trying its best to improve things”. Ties between India and Nepal relations grew tense, but not necessarily troublesome, for Delhi moved forward on a series of agreements and grants, including discussions on the newly agreed Gandak irrigation project. The Chinese themselves maintained a discreet silence on the coup, effectively ready to deal with an authoritarian Mahendra. Beijing’s soft approval towards the coup was even marked by China conceding all disputed China-Nepal border claims but three – including on Mount Everest – and an increase in economic aid. 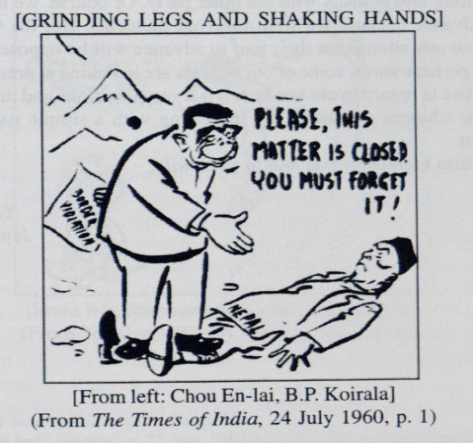 Note that the Chinese had got into two border disputes with Nepal the previous year. In April 1960, Nepal and China argued over whether Mount Everest was fully within Nepali boundaries, as the former argued, or whether the crest of the peak could be interpreted as the borderline, as the latter claimed. Koirala’s quote after a Chinese expedition allegedly climbed the peak that year said volumes about the border dispute. As political scientist Leo E. Rose quotes in his book Nepal: Strategy for Survival, Koirala said, “China was under no obligation to inform Nepal about the expedition but maintained this did not affect his government’s claim that Everest belonged to Nepal and to Nepal alone.” The Chinese expedition to Everest warranted enough attention in India for cartoonist R.K. Laxman to quip, “I bet it’s the printer’s devil! It ought to be “Chinese claim [instead of climb].”’

Then in June that same year, Chinese border troops killed Nepali subedar Bam Prasad and captured ten soldiers in Mustang, mistaking them for ‘Tibetan rebel bandits’, and argued that ‘the place of the incident is clearly within Chinese territory, and Chinese troops have not entered territory of the Kingdom of Nepal’. China, however, agreed to compensate Nepal for the loss of life and return the prisoners – but as General Sam Cowan wrote in a brilliant work of investigation, the point where the subedar was shot was two kilometres within Nepali boundaries. Nehru thought that the “general attitude of the Chinese is very objectionable” in a telegram to V.K. Krishna Menon, and in a letter to Koirala, wrote: “I did not think that this was a prelude to some kind of invasion…[but the Chinese] had not got rid of their method of bullying and throwing their weight about… [wherever] they can, rather quietly and stealthily, occupy some territory,” a portend of things to come.

Also read: The View from Nepal on the Doklam Standoff

However, these two incidents did not deter China from negotiating with the king directly after his takeover, perhaps in a bid to counter India’s stance to the new royal regime and pleased they did not have to deal with an intransigent Koirala. Even though Mahendra emphatically announced Everest belonged to Nepal during his visit, Beijing agreed “that the Nepal-Tibet border had been delimited by tradition and did not require redefinition except in places where the two governments” concepts of the “traditional customary boundary line” differed. This was a position that India had argued in vain in its own border dispute with China.

On the last day of the visit, Tulsi Giri, the Nepali foreign minister who’d go on to become prime minister, signed the Kathmandu-Tibet road agreement. Rose argues that Mahendra did not want to sign on the agreement himself because of the displeasure he knew it would cause Delhi, and/or because he wanted to show his “dissatisfaction with the pressure tactics which, according to some sources, the Chinese had employed in obtaining his assent to the road agreement.” The Chinese had allegedly sprung the road agreement on him a day before, and Mahendra was in no position to refuse it.

Mahendra dismissed Indian concerns about the new highway that would link Kathmandu to Tibet via the old pass of Kuti that generations of trans-Himalayan traders had crossed. But “the Indian government…was far more concerned with the possibility that Chinese troops might use the road to enter Nepal in tanks,” which Nepal was equally concerned about.

The royal takeover had succeeded in a realignment of Nepali foreign policy, bringing it closer to the supposed ideal of an equidistant relationship with China and India. But Delhi was now concerned about Mahendra’s motivations and the relationship was further strained by the presence of Nepali Congress exiles on Indian soil. When an assassination attempt on Mahendra via a bomb attack occurred in Janakpur, close to the Indian border, in January 1962, massive anti-Indian demonstrations took place in Kathmandu. More alarmingly, a Nepali foreign ministry spokesperson declared that unidentified aircraft “were dropping arms to Tibetan rebels in the Mustang area” and that “if the Chinese should feel threatened by the rebels and should demand the right to send troops into Nepal to bring the Tibetans under control, there was little Kathmandu could do but comply with the request.” 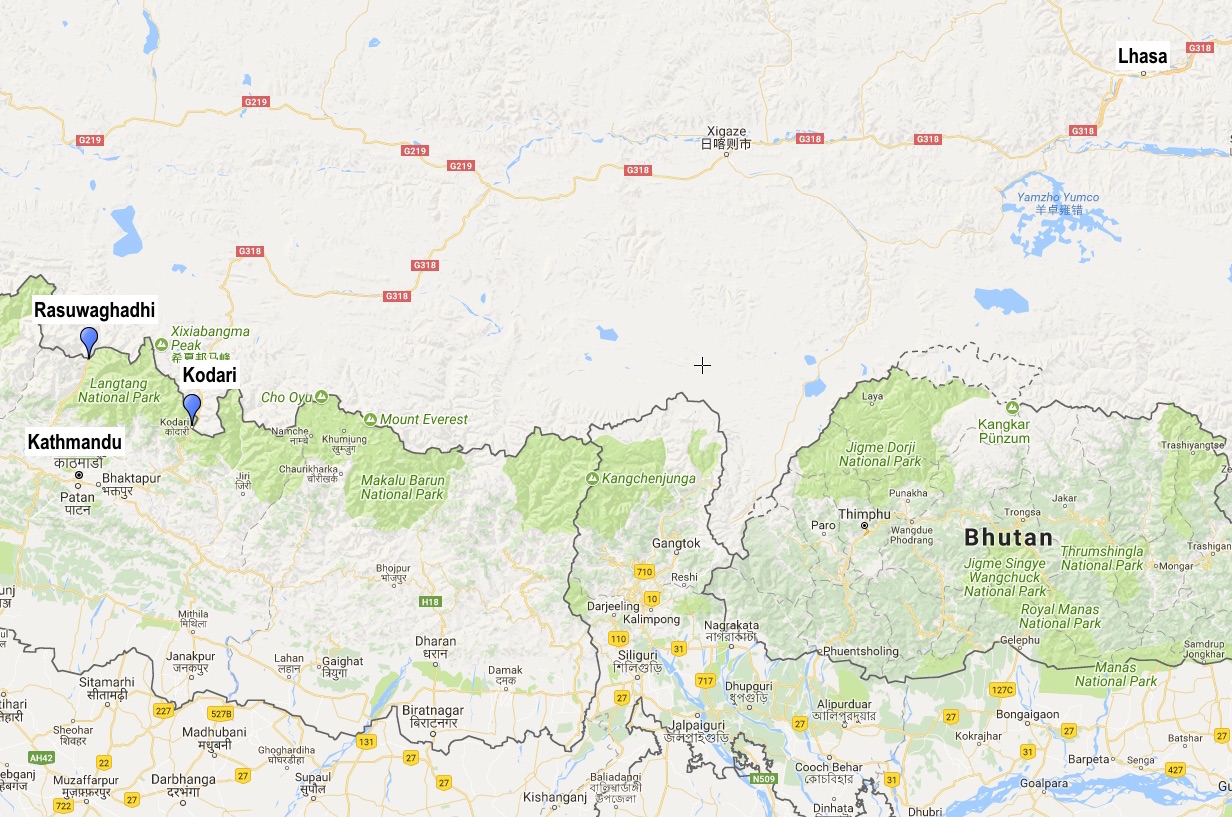 The Araniko highway runs from Kathmandu to Kodari, while a new rpad to Tibet is being developed through Rasuwaghadhi. Credit: scribble Maps

Despite talks between Nehru and Mahendra, the Delhi-Kathmandu relationship continued to deteriorate under the face of cross-border attacks by the Nepali Congress rebels, and in September 1962, India imposed an “unofficial and undeclared economic blockade on Nepal” – but even as Mahendra began to get frantic and Kathmandu’s response turned ‘hysterical’ to the blockade, the Sino-Indian war began on October 20 that year.

The war saved the blushes for Kathmandu. Delhi had to immediately back down on the blockade to focus on the war. Mahendra was elated. However, he still had the Chinese to contend with. Rose writes: “Although the Mahendra regime had benefited substantially from China’s “India war,” the results had also raised some problems for Kathmandu. China had clearly demonstrated that it was prepared to use military force against neighboring states; and if today India, why not Nepal tomorrow?” An eerie parallel to Bhutan’s position in the ongoing Doklam stand-off.

Further, Nepal was concerned by Chinese construction workers “showing Chinese propaganda movies to surrounding [Nepali] villages and distributing communist literature and Mao buttons,” so much so that it came up with its own “Mahendra button”.

Fifty years after the agreement over a highway, the old concerns once again plague Nepal. As Nepali journalist and Kantipur editor Sudheer Sharma asked in a recent column, how does Nepal respond to the ‘new Cold War’ between India and China? Here is a dilemma for foreign policy wonks: the China card has never really worked for Nepal historically, including in the 1816 war with the British, and even Mahendra’s concerns over the security aspects of the Kodari highway show his unease over pursuing a closer relationship with China. But India’s domineering foreign policy in the neighbourhood – especially in Nepal, where it worked out a peace agreement to its credit, then has successively appeared as an overt, interfering bully – doesn’t give the other countries much to be glad about.

One can conclusively argue it was the 2015 blockade that turned Kathmandu towards Beijing, but even then, Nepali attempts to establish a trans-Himalayan economic route that could rival the sea-land route via Kolkata in costs have not succeeded. Nepal is looking at Visakhapatnam as a second port that could serve its needs, but the increased freight charges will offset any benefits from lower port charges there. An overland route from Shanghai via the Himalayas to Kathmandu may be theoretically possible if a railroad is built up to the border. Even then, this will require significant investment in infrastructure from both sides – especially more for Kathmandu: 90% of the proposed railroad from Kathmandu to Kerung “would be either over bridges or through tunnels,” a Nepal railway official was quoted in a recent report, a massive challenge for a country whose infrastructure is not in the greatest shape to begin with.