India, China Clash Over US Ambassador's Visit to Tawang

While China said that Verma’s visit to the northeastern state would affect the “peace and tranquillity” on the border, India held that his visit was an integral part of the country. 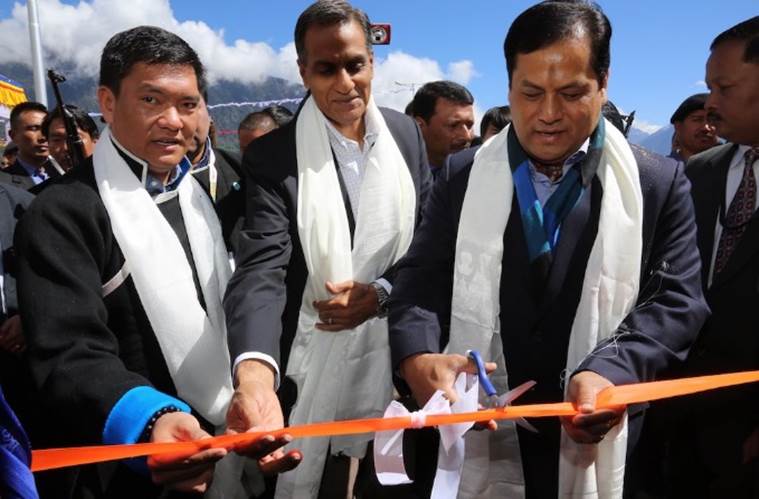 New Delhi: India and China on Monday exchanged words over the visit of US ambassador to Arunachal Pradesh last week, with China claiming that a “third party” would “damage” the “hard-earned peace and tranquillity” on the border and New Delhi stating that there was “nothing unusual” about the trip.

On October 21, US envoy Richard Verma flew to Tawang, which is a part of the region in India’s Northeast that is claimed by China. He was the guest of honour at the annual Tawang Festival. It was the first time that a foreign diplomat – let alone the US ambassador – had been extended this invitation.

At the daily briefing on Monday, Chinese foreign ministry spokesperson Lu Kang said that China was “firmly opposed” to Verma’s visit which would “damage the hard-earned peace and tranquillity of the China-India border region”.

He claimed that US’s involvement would further vitiate the dispute. “Any responsible third party should respect efforts by China and India to seek peaceful and stable reconciliation and not the opposite.”

Kang urged the US to “stop getting involved in the China-India territorial dispute and do more to benefit this region’s peace and tranquillity.”

Stating that the boundary question was “very complex and sensitive,” he further noted, “At the end of the day only the peoples of the two countries will fall victims.”

“We believe India and China as two major countries have enough wisdom to properly deal with this issue and safeguard the fundamental interest of the two peoples,” added the Chinese foreign ministry spokesperson.

Immediately after China’s response, India told Beijing that it had no reason to get annoyed.

“The US ambassador visited Arunachal Pradesh, a state which is an integral part of the country to which he is accredited. There is nothing unusual in it,” said MEA spokesperson Vikas Swarup.

Minister of state for home affairs, Kiren Rijiju who also attended Tawang festival also pitched in that Verma was on a sight-seeing trip.

Due to the sensitivity of the border dispute, Varma’s short visit was intriguing. It was the first time that the US ambassador had gone to Tawang, which is the birthplace of the sixth Dalai Lama and is therefore linked to China’s perception of legitimacy over Tibet.

The state government, which is backed by the national ruling party BJP, recently invited Dalai Lama to Tawang – another move that would not make Beijing happy.

India and China have been going through a relatively strained period in their relations, which began with Beijing blocking India’s application for membership to the Nuclear Suppliers Group at the Seoul plenary meeting. Thereafter, India had not been pleased with China extending a hold on the United Nation’s listing of Jaish-e-Mohammed supremo Masood Azhar as a terrorist.

“China only really ever worries about India when there is a India-US coming together for any reason. In this case, the Americans have clearly and unequivocally declared their position in India’s favour just as China seems to be doing so in favour of Pakistan on the question of Kashmir,” Jabin T. Jacob, a fellow at the Institute of Chinese Studies told The Wire.

He noted that while the Chinese statement was “sharply critical” of the US, it did not describe the territory as belonging to China, as opposed to the MEA spokesperson asserting that Arunachal was an “integral part of India.”

“I think the Chinese are being very careful not to criticise India too much on this score and to keep the blame firmly on the US,” said Jacob, pointing to the reference of “wisdom” of both Asian neighbours to solve their dispute. He said that it was an “appeal to the Indian leadership to desist from aligning too closely with the US.”

Jacob added that India could very well use the Chinese position on “third party” and its consequences next time when reiterating stance on China’s involvement in projects in Pakistan-occupied Kashmir. “Not that I think this really helps us in changing the situation on the ground there,” he said.

This is the second time this year that China has objected to a US diplomat’s position on Arunachal.

In April, the Chinese foreign ministry had protested when US consul general in Kolkata, Craig L. Hall, during a visit to Itanagar, reiterated that the US “is absolutely clear” that Arunachal is Indian territory.