The Year of Living Dangerously for India and China

Instead of celebrating 70 years of diplomatic relations, we are in the midst of an armed coexistence. 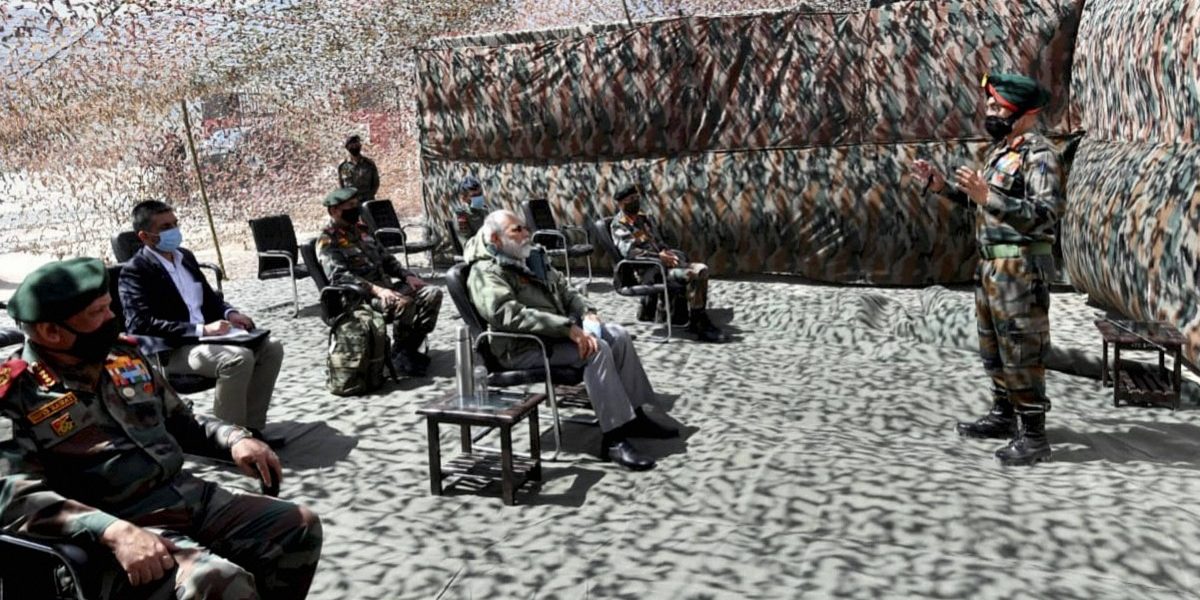 This year, 2020, marks the 70th anniversary of the establishment of diplomatic relations between India and China. It was meant to be a year of celebration. But first the COVID-19 pandemic and now the bloody showdown in Galwan where 20 of Indian Army personnel lost their lives have exposed the tragic irony of those plans. What was to be an annus mirabilis has been replaced by an annus horribilis in bilateral relations.

Monday brought news of a conversation between the two special representatives on the India-China boundary question, Indian National Security Advisor Ajit Doval and Chinese foreign minister Wang Yi. The fact that the two spoke is a positive development. They seem to have had a substantive and in-depth conversation. One can only hope this conversation widens the way to a durable reduction of tensions between India and China.

Four understandings were apparently reached by the two special representatives: the maintenance of peace and tranquillity in the border areas which it was said matters significantly to the relationship; two, that previous agreements on this subject should be observed; three, communication through the special representatives mechanism and the working mechanism for coordination and consultation on border affairs should be strengthened “without interruption” and CBMs improved to prevent recurrence of confrontation/incidents; and four, to effect a complete disengagement process between border troops.

The Indian government statement issued after the conversation focuses more on the need to complete the  disengagement process expeditiously,“strictly respect and observe the LAC” and not to take unilateral action to alter the status quo. There is no talk of  the “big picture” in bilateral relations . The focus is entirely on the LAC situation. The tone of both statements is temperate and restrained, however.

While these announcements are therefore salutary and hopefully a complete disengagement process along the disturbed areas of the LAC in Ladakh will take place as a result, there is no guarantee that all will be well in India-China relations. The relationship has suffered a serious blow as a result of the tragic events in the Galwan Valley. Mutual trust and confidence are at their lowest level and will not be restored easily. There are miles to go.

The recent Chinese actions in Ladakh amounted to significant ingress across the LAC and were aimed at gaining tactical advantage and strategic depth against Indian forces in the area. There are a number of pockets across the LAC where the definition of where the line should lie is perceived differently by India and China. These disputes have become increasingly difficult to contain in recent years. An exercise to clarify the LAC by the two countries ran aground in the early 2000s.

The sector of contention/lack of agreement in this regard was the Western Sector of the border/LAC where each other’s maps were seen informally by each side and then returned. The exercise was not resumed after that because of Chinese opposition.

Also read: Galwan Is a Chapter in China’s Tireless Pursuit of ‘Lost’ Territory

Chinese language media reports in the wake of the Galwan incident have accused the Indian side of having been consistently provocative in the border areas. These also saw the 2017 stand-off in the Doklam plateau in Bhutan as a “crisis” which was an inflection point that tilted the balance in relations towards the “negative”, necessitating a total review of approaches to India. A recent podcast by The Hindu offers fascinating insights into this aspect, as also a paper for the Delhi Policy Group by scholar Antara Ghosal.

The aggressive and offensive pushback by China appeared to be aimed against India’s strengthening its infrastructure and access to areas along the LAC. Going by Chinese analysts whose views have been carried in the Chinese-language media within China, there is an impression on the Chinese side that India’s moves to consolidate and improve defences on her side of the LAC are “provocative” and that India is a country that makes “trouble” for China in the region (for eg, resisting China on the BRI, the CPEC, obstructing China’s development of relations with other South Asian countries, teaming up with the US and other partners like Japan to contain China in the Indo-Pacific), and that it is time to firmly resist and offer a “fierce response” to India whatever the consequences may be for the bilateral relationship.

These may not be universal views held by Chinese commentators, but they definitely command salience given the rising tide of nationalism within the country, a PLA that has been traditionally hostile to India and the ‘China first’ sinocentrism of Xi Jinping. Despite the understanding that may have been reached for disengagement in Ladakh, these views will not be erased or mitigated.

China’s transgressions across the LAC in the Western Sector have gone up steadily in the recent years. Chinese plans to secure more ‘defensive’ depth along LAC have been operational for some years now. But the aggressiveness, bellicosity and pronounced hostility of their border troops are new phenomena and were most certainly the factors that caused the violent and brutal attack on our patrol in Galwan. China, despite its power and global reach today, remains a deeply insecure and psychologically challenged nation. Her basic intent is to ‘check’ India, diminish its stature and weight in the Great (regional and global) Game to confirm China’s position as the paramount power.

The Indian defence forces are undoubtedly capable of defending India’s security and national interest against any offensive intent of China. 2020 is not 1962. Our forces are battle-hardened and fighting fit. The Chinese PLA despite superior infrastructure, logistics and firepower, and the reforms introduced by Xi Jinping to reorganise and tighten command structures, have not been tested in battle for more than a generation, since the war with Vietnam in the late 1970s. However, neither side can benefit from a conflict that will destroy, or at least put back the prospects of a peaceful settlement of outstanding problems for years to come, apart from the fall-out of such a conflict on all spheres of national life.

Also read: How Bengal’s Kalimpong Triggered the Souring of India-China Relations in the 1950s

India has to guard against the possibility of China opening other fronts in event of any escalation of tensions.  In Arunachal Pradesh, just as India has a claim to the Aksai Chin, the Chinese claim 90,000 square km of Indian territory and have their eyes on the monastery town of Tawang, the birthplace of the Sixth Dalai Lama. This is a territorial ‘claim’ which is differentiated from a dispute over the LAC.

The Chinese PLA have always regretted their withdrawal from areas south of the McMahon Line after the 1962 conflict. Many Chinese feel that India may have lost the war but gained a ‘state’ whereas China won the battle but ‘lost’ territory. They regard this territory as the sector of the ‘largest dispute’ as far as the boundary problem with India is concerned .

Bilateral diplomacy must however work hard to ensure the implementation of the consensus between the two militaries to achieve disengagement in areas where the LAC in Ladakh is subject to overlapping interpretations. Sober choices have to be made by both countries and there is definitely a need to focus on the “big picture” of bilateral relations.

The challenge of India and China rubbing up against each other, as Nehru said long ago, is one that runs across the spine of Asia. A conflict between India and China has implications that go far beyond our borders. It is unfortunate that in this 70th year of the establishment of diplomatic relations between them, peaceful coexistence has been replaced by armed coexistence.

Nirupama Rao is a former Foreign Secretary and Ambassador to China.