India and China's Belt and Road Initiative: A Turning Point?

Breaking down India's existential issues regarding the BRI. 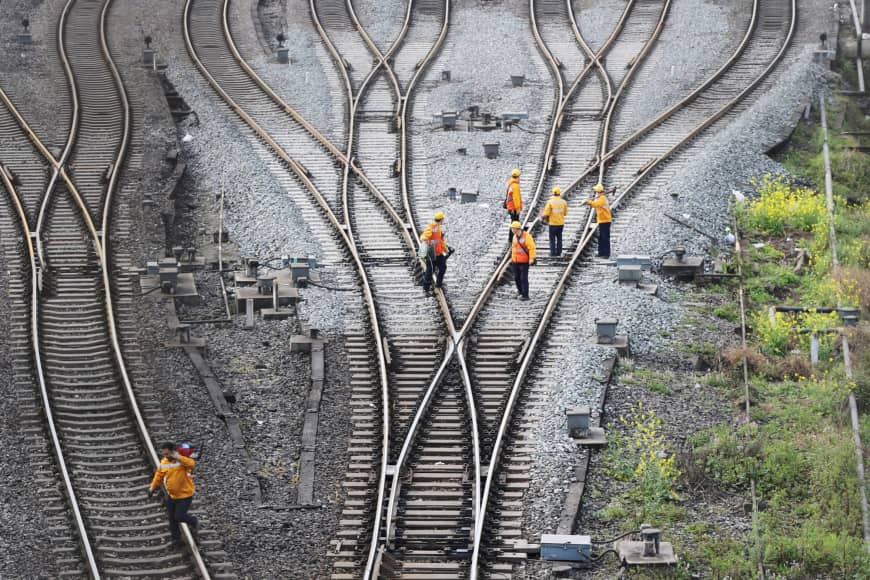 Workers inspect railway tracks that serve as a part of the Belt and Road freight rail route linking Chongqing, China, to Duisburg, Germany, at the Dazhou railway station in Sichuan province, China, on March 14. Credit: Reuters 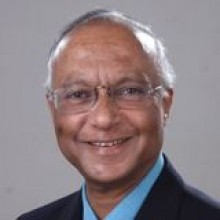 This writer’s piece in The Wire ten days before the Second Belt and Road (BRI) Forum in Beijing had speculated whether China would take on board the various misgivings expressed worldwide regarding the BRI, and relaunch it in a new avatar.

The Forum – replete with pomp and circumstance – has since concluded, and ‘the captains and the kings’ have returned to their stations. The results of their deliberations are now available for analysis.

The reference above to the phrase from Rudyard Kipling’s Recessional is deliberate. At the Diamond Jubilee celebrations of Queen-Empress Victoria in London, the arch-imperialist Kipling published this poem in ‘The Times’ of London, cautioning against hubris at the zenith of the Empire, and emphasising the need to preserve ‘a humble and a contrite heart’.

That advice given to a 19th century monarch seems to have been noted by the Chinese Communist Party and by President Xi Jinping himself. The tone at the Forum – if not humble – was noticeably emollient, indicating that the various criticisms of the BRI had hit their mark and were being suitably processed.

The detailed joint communique issued by the assembled world leaders at the 2nd BRI Forum covers all these concerns, including inter alia (i) consultation, transparency and governance of BRI ventures, (ii) ensuring that BRI conforms to norms of being clean, green and environmentally sustainable, (iii) producing viable, bankable and financially sustainable projects, and (iv) participation of global investors and international organisations. There is a separate list of 283 deliverables attached to the BRI ventures spelling out the separate agreements, standards, protocols and other initiatives tabled at the Forum for adoption or further discussion.

These include – most importantly – a Debt Sustainability Framework to enhance and promote the responsible deployment and usage of debt; a set of green initiatives to align BRI with the objectives of the Millennium Development Goals and Paris climate change targets; and multifarious areas as varied as scholarships, science initiatives, public outreach, digital highways, people-to-people initiatives, capability-building, a legal backbone etc.

The sheer scope and scale of what BRI aims to cover is indeed mind-boggling: perhaps this is what prompted Britain’s Chancellor of the Exchequer to exclaim that the BRI was ‘a project of truly epic ambition’.

Clearly, the Chinese have taken the push-backs to BRI seriously, and have come to the conclusion that the enterprise would be in difficulty if the standards of transparency, inclusiveness, governance, financial viability and green sustainability were not brought in line with (or made superior to) currently accepted global practice. Hence the constant reference in these documents to international conventions, covenants and standards.

But the BRI differs from the traditional infrastructure projects undertaken by the Bretton Woods institutions in three significant ways: first, its sheer scope and size as stated above, which follows from the BRI’s role as the driver of a larger vision of comprehensive development; second, by the BRI’s focus being largely on the poorest and least developed countries and regions of the planet; third, by the Chinese State still remaining the prime mover of the project, albeit the future – as now envisaged – visualises several other partners, private and public. These differences are the strengths of BRI, but also indicate its points of vulnerability.

Apart from these official documents released at the Forum, recent evidence from independent sources also indicates that the BRI’s much-touted dangers such as ‘debt-entrapment’ have been overplayed. Deborah Brautigam’s investigations of 1,000 Chinese loans to developing countries show that “China’s lending is significant, but fears that the Chinese government is deliberately preying on countries in need are unfounded”.

Both she and The Rhodium Group find Hambantota to be a unique and atypical case of asset seizure. The latter study also looks at 40 cases of debt renegotiation and debt forgiveness by China, which reveals that – objectively speaking (and ironically) – we should be much more concerned about China’s ‘lender risk’ than that of ‘debt entrapment’ by the recipient. It is China’s toiling population who should be worried whether their country’s loans will ever be repaid…

Also read: China Must Slow Down and Change Lanes With the Belt and Road Initiative

So, what would the world leaders assembled in Beijing have concluded at the end of the 2nd BRI Forum? As practical, shrewd men and women, they would probably assess the BRI as a new game in town that is here to stay. Not perfect by any means, still risky and prone to stumble, but yet offering an alternative model to the many countries who find that the existing arrangements offer no real recourse for them to climb up the development ladder.

The joint communique is their endorsement to give Beijing a ticket to play with the big boys, and to put its system to test. And the big boys were there in force in Beijing. The United Nations Secretary-General and the head of the IMF were present. All the major powers in the world were represented, at different levels. Save one – like the boy on the burning deck, India stayed outside – defiant, and alone. 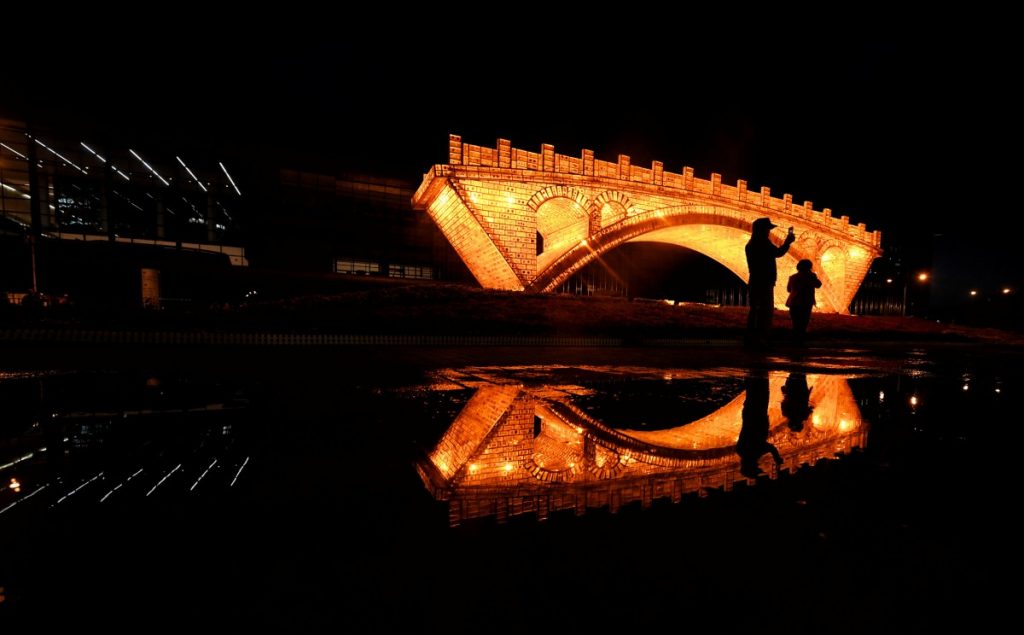 People take pictures in front of a ‘Golden Bridge on Silk Road’ installation, set up ahead of the Belt and Road Forum, outside the National Convention Centre in Beijing. Credit: Reuters/Stringer

India’s reasons to shun the BRI were articulated at the time of the 1st Forum in 2017. These are, expressed in summary form and in descending order of importance: (i) the China-Pakistan Economic Corridor (CPEC) – a BRI project – violates India’s sovereignty, as it traverses Pakistan-Occupied Kashmir, a territory claimed by India and illegally occupied by Pakistan; (ii) the BRI is not simply an infrastructure and connectivity initiative but a geopolitical design to establish Chinese dominance; (iii) the BRI design is one-sided and non-transparent, and rife with the risks of crippling debt, environmental damage and adverse socio-economic consequences.

Let us consider these one by one in reverse order.

The arguments spelt out earlier in this essay should serve to answer (iii): for any remaining doubts, surely India has the capability for sufficient due diligence; (ii) all great infrastructure and connectivity ventures – throughout history – have altered the prevailing geo-economic matrix, and hence the resulting geopolitical balance. While the geopolitical effects are short-lived, the geo-economic benefits survive over time. Consider the Suez and Panama Canals, or the Trans-Siberian Railway.

Their fundamental raison d’etre was to safeguard the arteries of the French and British Empires, advance American commercial interests or consolidate Tsarist Russia’s central and eastern dominions, respectively. Whilst these empires have long since disappeared, the huge expansion of global trade stimulated by these connective links continues to confer benefits right until present times.

(i) That leaves us with the CPEC as the only remaining question. Eminent diplomats are of the view that it is quite possible to find a creative solution, provided that India is open to a serious dialogue about the BRI. It is thus a chicken-and-egg problem.

Also read: Why India Needs to Take a Fresh Look at China’s Belt and Road Initiative

Here lies the rub, for we have been asking the wrong questions about the BRI. In the writer’s view, the truly existential issues for India regarding the BRI are not the three reasons enumerated earlier.

The real issues can be surfaced by India asking itself the following:

First, will the BRI – or parts thereof – help the Indian people in their journey to development and prosperity?

Second, is India willing to play a leadership role towards creating an economically integrated South Asia?

It is for the new Government of India – of whatever political hue – that takes office after the elections, to ponder these questions. A ‘No’ to both questions (very unlikely) would leave India plotting an autarkic course all by itself. A ‘Yes’ to the first and a ‘No’ to the second would leave our neighbours with a taste of either a selfish India that has abandoned its neighbours, or one that has been out-manoeuvred by China. A ‘No’ and ‘Yes’ sequence would call for proven demonstration by India of self-generated and strong levels of performance, capabilities and resources.

Finally, a ‘Yes’-‘Yes’ pair of answers would open the door for a India-China dialogue about things that really matter – peace, development, prosperity, ecology, security and dignity. A China that has realised that it is no superhero who can single-handedly transform the world through the BRI will be ready for a productive conversation with an India that needs every possible engine of development to fulfil the promises to its people.

But we are running ahead of the script. The answers to these questions will only emerge after May 23. Till then, we can draw inspiration from the immortal lyrics of Bob Dylan:

“The answer, my friend, is blowing in the wind,

The answer is blowing in the wind.”

Ravi Bhoothalingam is Treasurer and Honorary Fellow, Institute of Chinese Studies, and an Independent Director on corporate boards.