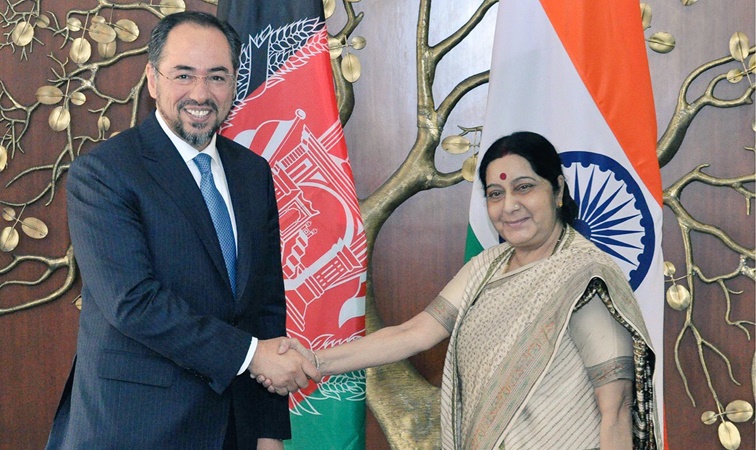 New Delhi: India today agreed to provide Afghanistan further assistance to strengthen its security forces as the two strategic partners decided to deepen security cooperation and resolved to work closely to deal with the challenge of cross-border terrorism from Pakistan.

“We remain united in overcoming the challenges posed by cross-border terrorism and safe havens and sanctuaries to both our countries,” Swaraj said at a joint media briefing with Rabbani.

Afghanistan has faced a wave of terror attacks in the last few months and the proposed reconciliation and peace process is yet to make any progress.

Asserting that its relationship with Afghanistan is an “article of faith” for India, she said New Delhi would continue to work with Afghan people in their efforts to build a secure, stable, peaceful, prosperous, united and inclusive Afghanistan.

The two sides also inked four pacts, including one on vehicular movement to boost overland transit and another on fresh batch of development projects by India in Afghanistan.

“We support national peace and reconciliation in an atmosphere free from violence and within the framework of Afghanistan’s Constitution,” Swaraj said, reiterating that India would continue to stand shoulder-to-shoulder with the people of Afghanistan in realising their dreams.

Both Swaraj and Rabbani were clear in their references about terrorism emanating from Pakistan though they did not name the country.

Thanking India for its unflinching support for peace and stability in Afghanistan, Rabbani said both countries agreed to strengthen security cooperation. “India has further agreed to provide assistance for Afghan national defence forces.”

India has already invested over $2 billion in reconstruction of Afghanistan in the last 15 years but has been adopting a cautious approach in supplying military hardware.

India has given four military helicopters to Afghanistan and imparted training to hundreds of Afghan security personnel.

“The enabling environment for terrorism is directly linked to continued support they receive from outside of Afghanistan,” he said.

The Afghan foreign minister said the countries have been the target of terrorism and violent extremism which is threatening the stability of the region.

He referred to “terrorists groups like LeT and JeM which have been launching attacks against India and indiscriminately killing civilians in this country and engaging in similar terrorist activities along with Taliban Al-Qaeda and Daesh in Afghanistan”.

He said Afghanistan’s friendship with India or any other country does not mean hostility with others in the neighbourhood.

“Unlike others, Afghanistan has hardly sought security in the insecurity of others.”

Afghanistan, Rabbani added, is a landlocked country and its peace and prosperity is dependent on “those of our neighbours near and extended”.

“That is why we reject zero sum approaches that undermine our collective security today and years to come.”

In her remarks, Swaraj said India was “indebted” to Afghan security forces for ensuring safety of Indians working in Afghanistan.

Discussing connectivity projects, Swaraj said the development of Chahbahar Port in trilateral cooperation with Iran was being expedited. The supply of wheat to Afghanistan through the Chahbahar port would begin in the coming weeks.

She also announced 500 new scholarships programmes for next of kin of the martyrs of the Afghan National Defence and Security Forces from academic year 2018.

Rabbani said Afghanistan strongly supports India’s membership of the UN Security Council and other groupings and hoped that it would back Kabul’s entry into the Shanghai Cooperation Organisation.

Swaraj said India would assist in development projects like the Shatoot dam and drinking water supply project for Kabul, low cost housing for returning refugees, water supply network for Charikar city and a polyclinic in Mazar-e-Sharif.

“Focus will continue on building governance and democratic institutions, human resource capacity and skill development, including in the areas of education, health, agriculture, energy, application of remote sensing in resource management and space technology in governance,” she said.