US to India: Anti-India Terror Groups Won’t Be Allowed to Function in Afghanistan Under Taliban Agreement

Till now, when US officials had spoken about the requirement that the Taliban not provide a sanctuary to terror groups, it had largely been with reference to the Al-Qaeda.

New Delhi: Even as India’s concerns regarding an interim Afghan government remain, US special envoy on Afghan reconciliation, Zalmay Khalilzad, has assured New Delhi that terror groups targeting India will also be a part of the assurances that the Taliban will have to give, saying that it will not allow Afghanistan to be a haven of terrorism.

The assurance was conveyed by Khalilzad to Indian foreign secretary, Vijay Gokhale, during their meeting in Washington earlier this week.

As per Indian government sources, the US had briefed Gokhale on the marathon round of 16 days of talks with the Taliban delegation at Doha.

The US envoy’s assessment of the talks was largely in line with his public postings on his Twitter account. While there has been some progress on the issue of counter-terrorism assurances and withdrawing of foreign troops, there has not been much much of a breakthrough on intra-Afghan dialogue and a comprehensive ceasefire.

(2/4) Peace requires agreement on four issues: counter-terrorism assurances, troop withdrawal, intra-Afghan dialogue, and a comprehensive ceasefire. In January talks, we “agreed in principle” on these four elements. We’re now “agreed in draft” on the first two.

Till now, when US officials had spoken about the requirement that the Taliban not provide a sanctuary to terror groups, it had largely been with reference to the Al-Qaeda. 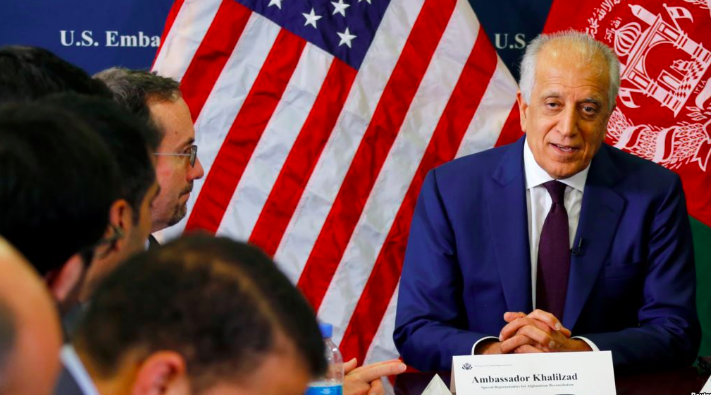 Sources said that Gokhale asked Khalilzad specifically whether the counter-terrorism assurances would include terror groups targeting India. The US diplomat replied in the affirmative, officials said.

Gokhale also raised New Delhi’s stance that once foreign troops leave Afghanistan, the political structure of the country should be left in place. As reported by The Wire earlier, this had also been previously conveyed to Khalilzad when he visited New Delhi in January.

Also Read: India to US: Not in Favour of ‘Interim’ Government in Afghanistan

Sources reiterated that New Delhi did not believe that an interim government, with Taliban representatives, would be constitutionally valid, till there were fresh elections.

The Afghan government has been increasingly worried that Khalilzad would reach a deal on the interim government, without taking the Ghani administration into confidence. This anxiety was publicly articulated by the National Security Advisor Hamidullah Mohib, during his visit to Washington, when he criticised Khalilzad for not keeping Kabul in the loop and harbouring ‘viceregal’ ambitions.

A day later, the Afghan foreign ministry summoned a senior official in the Pakistan embassy in Kabul to lodge a protest against Khan’s remarks over a “new government” and stated that it was tantamount to interference in Afghanistan’s internal affairs.