The resolution, however, passed with 25 votes for, seven against and 16 abstentions, and established a fact-finding mission into the allegations of human rights violations by Iranian authorities. 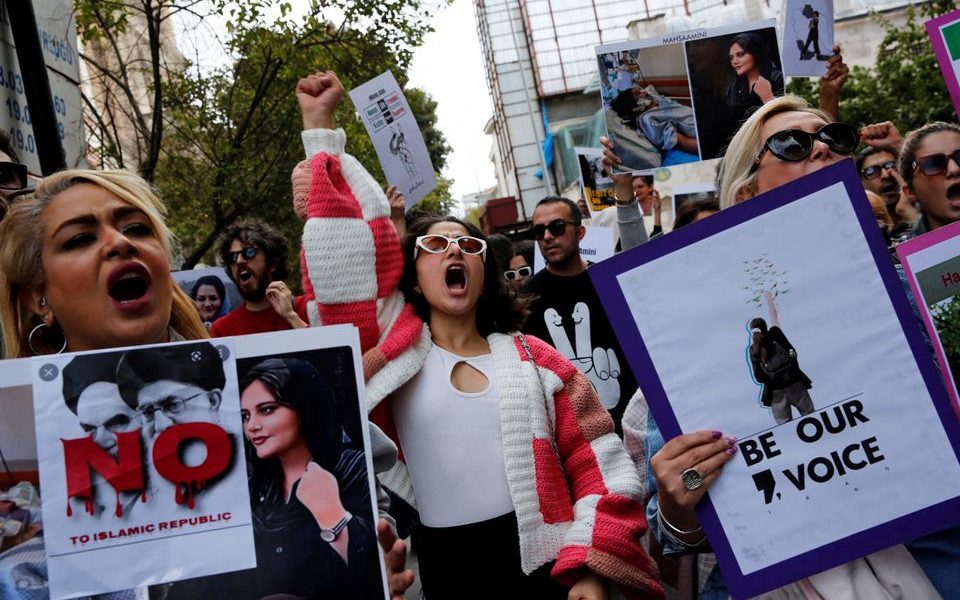 Demonstrators shout slogans during a protest in support of Iranian women and against the death of Mahsa Amini, near the Iranian consulate in Istanbul, Turkey October 7, 2022. REUTERS/Dilara Senkaya

New Delhi: India on Thursday, November 24, abstained on a resolution adopted by the United Nations Human Rights Council (UNHRC) to set up a fact-finding mission into alleged human rights violations in Iran committed on protesters in the country by state authorities.

The West Asian nation has seen protests rage since September 16 after 22-year-old Mahsa Amini was taken into custody by Iran’s morality police for wearing an ‘inappropriate’ headscarf, where she later died, drawing allegations of custodial violence.

India’s was one of 16 abstentions on the resolution, sponsored by Germany and the Netherlands, and comes just a week after New Delhi voted against an Iran-specific resolution in the third committee of the UN General Assembly.

However, the resolution in the UNHRC was passed, with 25 votes in favour, seven against and 16 abstentions, at a special session of the 47-member human rights body.

At its 35th special session, the @UN Human Rights Council decided to create a new fact-finding mission to investigate “alleged #HumanRightsViolations in the Islamic Republic of #Iran related to the protests that began on 16 September 2022.”#SS35 pic.twitter.com/d1wqPCC7fy

Deploring the “violent crackdown on peaceful protests by security forces” following the death in custody of Jina Mahsa Amini, the resolution established a fact-finding mission into the allegations of human rights violations in Iran since September 16.

The 25 votes in favour of the resolution included those cast by the US, the UK, and 12 developing nations, too. China, Pakistan, Armenia, Eritrea, Cuba and Venezuela voted against the resolution. The two Gulf members of the Council, Qatar and United Arab Emirates, abstained.

India has not issued any statement or explanation for its decision to abstain from voting in the resolution.

Also read: Why the Iran Demonstrations of 2022 Are Different

Further, India also abstained on an oral amendment proposed by China to remove the clause related to formation of the fact-finding mission. This amendment was rejected.

India has, so far, kept a studious silence on the Iran protests. On two occasions, Ministry of External Affairs (MEA) spokesperson Arindam Bagchi was asked about the protests over the last two months, but both times he demurred from sharing any comment.

Even at Thursday’s weekly briefing, the spokesperson refused to share any views on the protests.

Earlier on November 2, the UN Security Council held an informal meeting on the Iranian protests. India did not give a statement at that meeting either.

Two weeks later, on November 16, the UNGA’s third committee voted on a draft resolution that referred to the death of Mahsa Amini and urged Iranian officials to “cease the use of excessive force against peaceful protesters, including women and children”.

It was passed with 80 votes in favour to 28 against, with 68 abstentions. India had voted ‘No’.

Accusing Western countries of orchestrating the protests, the Iranian government has claimed that Amini’s death was caused by a long-standing illness.