The UNGA passed the resolution drafted by France and Mexico with 140 votes in favour and 38 abstentions. 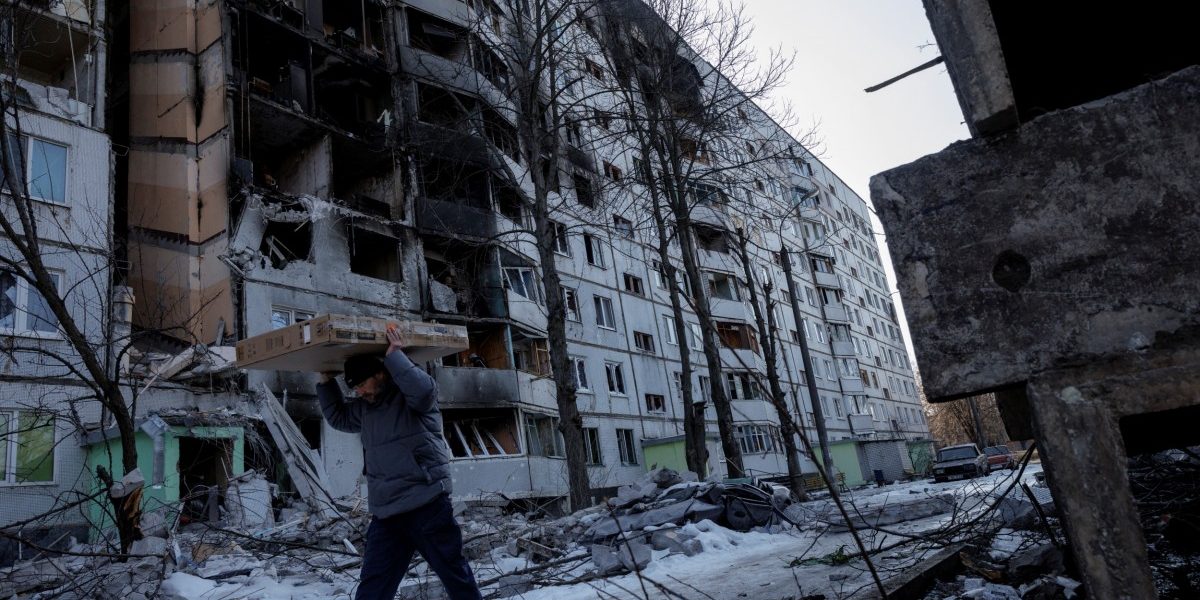 A man carries belonging out of a house that was hit by bombing in a northern district of Kharkiv as Russia's attack on Ukraine continues, Ukraine, March 24, 2022. Photo: Reuters/Thomas Peter

New Delhi: India on Thursday abstained on a resolution at the United Nations General Assembly adopted by a majority that criticised Russia for creating a “dire” humanitarian situation by its military invasion of Ukraine.

The UNGA passed the resolution drafted by France and Mexico with 140 votes in favour and 38 abstentions. Russia, Syria, North Korea, Eritrea and Belarus cast the five negative votes. Like the voting on the March 2 resolution in the UNGA, China and Pakistan joined India on the abstention bench.

Backed by Russia, South Africa had proposed another resolution on Ukraine. However, the UNGA supported Ukraine’s successful attempt to block voting on the South African initiative. India abstained on the question of whether the South African draft should be put to the vote.

In the last month, multiple resolutions calling on Russia to immediately withdraw its troops and for unhindered humanitarian access have been passed at the Security Council, Human Rights Council and the General Assembly.

India has, so far, abstained on all resolutions related to Ukraine brought at various bodies of the United Nations since Russia invaded its smaller neighbour on February 24.

A day earlier, Russia had tabled a draft resolution on the humanitarian situation in Ukraine in the UN Security Council, which had similar text to the Mexican and French version in UNGA. However, Russia’s draft omitted text that blamed Russian actions and called for an immediate cessation of violence.

Also read: India’s Ukraine Dilemma Could Have Consequences for Years to Come

The Russian resolution failed to muster approval, with only two votes by China and Russia in favour. All the other 13 UNSC members, including India, abstained.

After the vote at the UNGA on Thursday, India claimed that its abstention resulted from the text not putting a stronger spotlight, among others, on the peace talks between Ukraine and Russia.

“India abstained on the resolution since what we require now is to focus on cessation of hostilities and on urgent humanitarian assistance. The draft resolution did not fully reﬂect our expected focus on these challenges,” said India’s permanent representative to the UN, T.S. Tirumurti.

He stated that India believed that “efforts at the United Nations should contribute to de-escalation of the conﬂict; facilitate immediate cessation of hostilities to promote dialogue and diplomacy and bring parties together to ﬁnd an immediate end to the suffering of the people”.

The statement reiterated that India underlines the “need to respect the UN Charter, international law and the sovereignty and territorial integrity of states”.

Tirumurti asserted that the humanitarian situation continues to worsen, especially in cities.

The resolution deplored the “dire humanitarian consequences of the hostilities by the Russian Federation against Ukraine”, with special mention of the siege and shelling of urban centres, particularly the Black Sea port city of Mariupol.

Russia’s UN envoy Vassily Nebenzi termed the resolution a “pseudo humanitarian draft”. “Why pseudo-humanitarian? Because its authors only needed it to condemn Russia and stick labels to my country. They needed some sort of a roll-call of those who are ready to subscribe to a lopsided interpretation of the situation.”

Speaking to the media after the resolution was passed, the US’s permanent representative to the UN, Linda Thomas-Greenfield, told reporters that the passage was an “astounding success”.

In an answer to a question about countries abstaining, she said there is “no neutral ground” in the current conflict. “And for whatever reasons countries are deciding that they can abstain, they can remain neutral, all they need to do is look at the situation on the ground, look at the devastation, look at Mariupol – the buildings are all being attacked. Look at the large numbers of Ukrainians who have been forced from their homes – more than 3.5 million – 3.5 million have crossed the border – but up to 10 million total, including that 3 million, have been forced out of their homes.”

Among the 38 that abstained, over half – 20 countries – are from Africa.

In South Asia, all the countries maintained their voting pattern of the March 2 resolution on Ukraine, except for one. While India, Pakistan and Sri Lanka abstained, the rest voted for the French-Mexican draft. Bangladesh, however, changed its vote from an abstention to a ‘yes’ vote.

Similarly, Iraq, Senegal and South Sudan also voted in favour of the resolution after having abstained the last time. Five countries – Botswana, Somalia, Brunei, Comoros and Dominica – who voted ‘yes’ on March 2, decided to either abstain or not cast a vote at all this time. Ethiopia, Eswatini, Uzbekistan, Guinea-Bissau and Togo had not voted on the earlier resolution but abstained on Thursday.