This is the 11th time that India has abstained in voting on a draft resolution or a procedural matter related to Russia’s invasion of Ukraine at a major UN body since February 24. 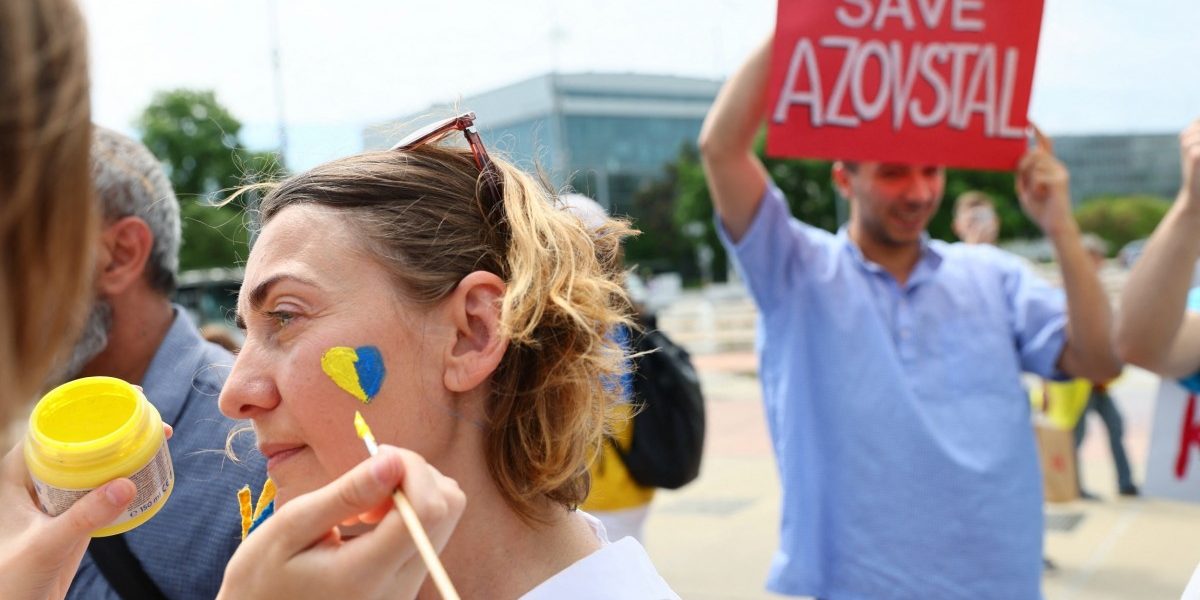 A woman paints a Ukrainian flag on a protester during a demonstration outside the United Nations during a special session on Ukraine of the Human Rights Council in Geneva, Switzerland, May 12, 2022. Photo: Reuters/Denis Balibouse

New Delhi: India on Thursday abstained on a resolution approved by the United Nations Human Rights Council, which updated the mandate of the Commission of Inquiry also to probe alleged war crimes in areas of Ukraine that were occupied by Russian security forces.

This is the 11th time that India has abstained in voting on a draft resolution or a procedural matter related to Russia’s invasion of Ukraine at a major UN body since February 24.

The UNHRC resolution was passed with 33 votes in favour and 12 abstentions. Only two countries, China and Eritrea, cast a negative vote.

In April, Russia was suspended from the UNHRC by the UN general assembly. But, as per procedure, it could have participated in the proceedings as a ‘concerned party’. However, Russia did not turn up for the special session. Instead, the Russian permanent representative to the UN in Geneva, Gennady Gatilov, described the proceedings as a “stunt”, adding that he would not participate in a “political rout to demonise Russia”.

Just like as in the previous UNHRC vote on setting up a commission of inquiry, India abstained on the current draft resolution, tabled by Ukraine.

There was no explanation of its vote, but the Indian envoy made a statement during the discussion in the first half of the day.

Stating that the situation had “further deteriorated”, senior Indian diplomat Indra Mani Pandey said, “From the reports coming out of Ukraine, it is evident that women and children have been disproportionately impacted and that they form the bulk of those who have moved to neighbouring countries and been displaced internally in Ukraine.”

He asserted that India believes that the “immediate priority should be evacuation of innocent civilians from areas witnessing intense fighting”.

Also read: Germany Has Purchased the Most Energy From Russian Since Ukraine War Began: Study

The statement recapped India’s position calling for an immediate cessation of violence, emphasis on dialogue, concern over global economic fallout, condemnation of killing civilians in Bucha and support for an independent investigation.

“We continue to emphasise that the contemporary global order is anchored on international law, UN Charter and respect for territorial integrity and sovereignty of all States. We call for respect for and protection of human rights of people in Ukraine and reiterate our abiding commitment to global promotion and protection of human rights,” Pandey said, echoing New Delhi’s stated position on the Ukraine war.

As is the norm, India did not directly criticise Russia for any actions on Ukrainian territory.

“The impact of the situation is being felt beyond the region. Oil prices are skyrocketing. There is also shortage of food grains and fertilisers in the world. This destabilisation has burdened people around the world, especially in developing and least developed countries,” he said.

The UN high commissioner for human rights Michele Bachelet stated that over 1,000 civilian bodies had been found in the Kyiv region alone. “Some of these people were killed in hostilities, others appear to have been summarily executed,” she told the Geneva-based UN body. 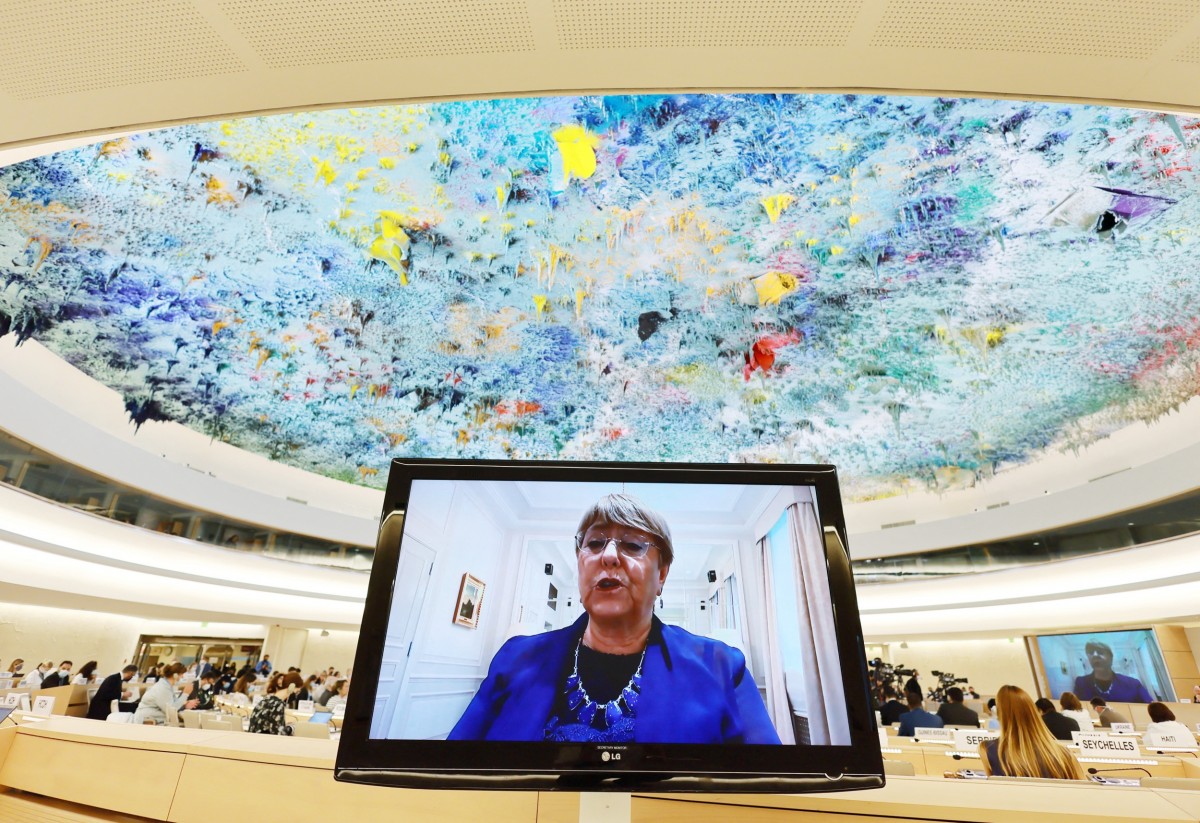 Michelle Bachelet, UN High Commissioner for Human Rights, is pictured on a screen during her video address to the Human Rights Council special session on human rights situation in Ukraine, at the United Nations in Geneva, Switzerland, May 12, 2022. Photo: Reuters/Denis Balibouse

She said that the killing of civilians appeared to be intentional, “carried out by snipers and soldiers”. “Civilians were killed when crossing the road or leaving their shelters to seek food and water. Others were killed as they fled in their vehicles.”

Bachelet said that in the village of Katiuzhanka in the Kyiv region, a family of four, which included a couple, their daughter and a grandfather, were shot by Russian soldiers while trying to drive to their house. “The parents were killed, while the child received two gunshot wounds.”

Ukraine’s first deputy minister of foreign affairs, Emine Dzheppar, held aloft a piece of paper with black squiggles, which she said was the first communication of a pre-teen boy allegedly sexually assaulted by Russian soldiers.

Also read: Why Are Americans So Interested in the War in Ukraine?

She said that the drawing was made by an “11-year-old boy who was raped in front of his mother; he actually lost the ability to speak after, and the only way how he communicates with the world are the black line and this is the first picture that he drew working with a group of psychologists who are trying to help him recover”.

The resolution adopted by the UNHRC in its 34th special session on Thursday called upon the Commission of Inquiry to “to address the events in the areas of the Kyiv, Chernihiv, Kharkiv and Sumy regions in late February and in March 2022, including their gender dimension, with a view to holding those responsible to account”.

It also urged Russia to give access to humanitarian agencies to Ukrainian nationals transferred to its territories, along with a “comprehensive list of such transferred persons and their whereabouts”.