In a statement at the UN Human Rights Council, India said it had been following "recent developments" in the island because of the presence of the Indian community there. 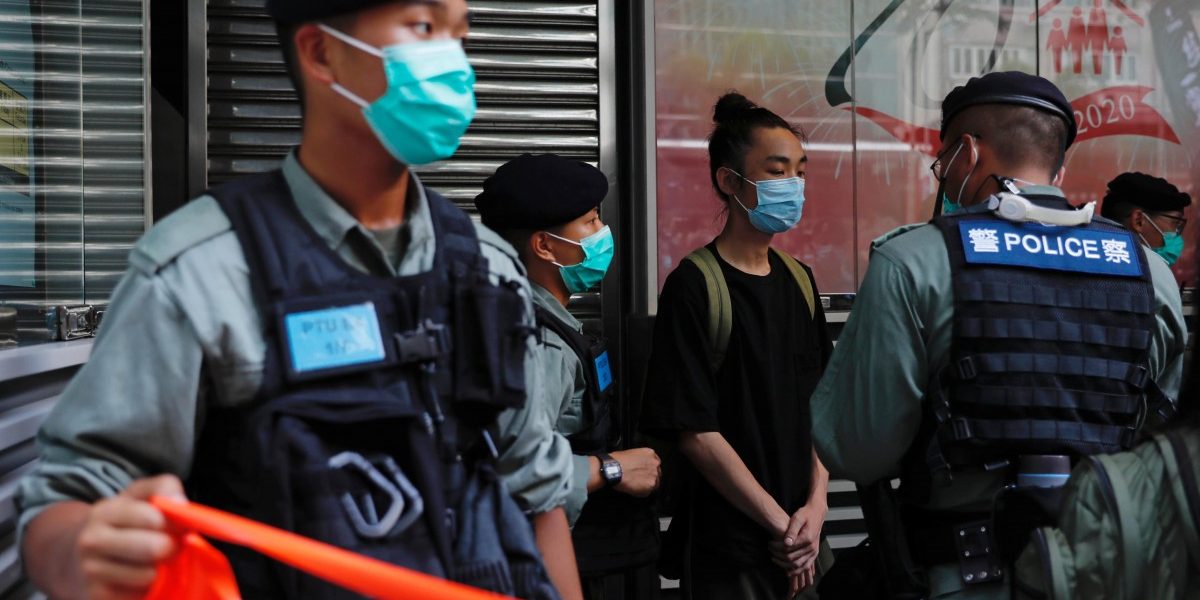 Police search a pro-democracy protester during a demonstration on the anniversary of Hong Kong's handover to China, in Hong Kong, China on July 1, 2020. Photo:Reuters/Tyrone Siu

New Delhi: As a likely consequence of ongoing border tensions with China, India on Wednesday waded into the controversy over the new Chinese security law in Hong Kong, stating that it hoped the “relevant parties” would address the concerns “properly, seriously and objectively”.

Further, the law provides for Chinese mainland authorities to have jurisdiction in cases involving foreign countries or involving national security. It also allows for the crimes of secession, subversion, terrorism and collusion with foreign forces to be punishable by up to life imprisonment.

The new legislation comes after Hong Kong has been rocked by anti-Beijing protests since June 2019, with citizens angry over the rising influence of China, contrary to the ‘one country, two systems’ concept” adopted when China took control of the former British colony in 1997.

India’s statement was made not by the foreign ministry in Delhi, but by its representative at the ongoing session of the UN Human Rights Council in Geneva.

“Given the large Indian community that makes the Hong Kong Special Administrative Region of China its home, India has been keeping a close watch on recent developments,” said India’s permanent representative to the UN in Geneva, Rajiv Chander. The strength of the Indian diaspora in Hong Kong, most of whom are Persons of Indian Origin, is stated to be around 40,000.

He noted that others have made “several statements expressing concern on these developments”.

While he did not name China, Chander stated, “We hope the relevant parties will take into account these views and address them properly, seriously and objectively”.

These words were part of India’s intervention at the presentation of the annual report and oral update on COVID-19 by the UN High Commissioner for Human Rights Michele Bachelet.

India and China are currently in the midst of their most serious military stand-off on the boundary at eastern Ladakh in 45 years. Last month, India lost 20 soldiers in a physical clash with Chinese troops near the line of actual control (LAC), which has heightened tensions, even as talks are going on at various levels to de-escalate the military build-up and return to status-quo.

India’s statement is significant as it has remained studiously silent over Hong Kong protests over the years.

In 2016, the Indian city of Dharamshala hosted a conference of minority groups in China. However, after Chinese foreign ministry protested the granting of visa to a Uighur activists, the visa application of pro-democracy Hong Kong activists were rejected.

Last year in June, India was among only two countries among G-20 member states who did not accept a petition from pro-democracy activists. The pro-democracy activists were on a petition drive to urge international community to put pressure on China ahead of the G-20 summit in Osaka. Only the consulates of India and Indonesia did not even meet with the activists, who then put their letter outside their door.

Last Friday, more than 50 UN independent experts had issued a joint statement asking the Human Rights Council to hold a special session on China, especially to monitor abuses like the “moves against the people of Hong Kong”.

“They have denounced the repression of protest and democracy advocacy in the Hong Kong Special Administrative Region (SAR), impunity for excessive use of force by police, the alleged use of chemical agents against protesters, the alleged sexual harassment and assault of women protesters in police stations and the alleged harassment of health care workers,” said the statement issued on June 26.

“All in all, these acts have crossed the ‘one country’ red line and called for resolute action,” Lam said in a video message to the Human Rights Council on Tuesday.