At ICJ, India Bats for Transfer of Sovereignty of Chagos to Mauritius

While India would like to see the transfer of sovereignty, it is also wary of an Indian Ocean without the active presence of US Navy. Any power vacuum in the Indian Ocean will only be advantageous to the burgeoning Chinese presence.

Ambassador Venu Rajamony presenting India's position in the oral proceedings concerning The Legal Consequences of the Separation of the Chagos Archipelago from Mauritius in 1965 at the International Court of Justice. Credit: Indian Embassy

New Delhi: India told the International Court of Justice (ICJ) on Wednesday, September 5, that “historical facts” confirm Mauritius always exercised sovereignty over the Chagos Archipelago and the decolonisation process stands incomplete if the disputed territory remains under the control of UK.

Indian ambassador to the Netherlands, Venu Rajamony read out the oral statement during a public hearing at the ICJ as part of its proceedings to consider an advisory opinion on the legal status of the UK exercising sovereignty over the Chagos Islands in the Indian Ocean.

UN General Assembly had adopted a resolution on June 22 which requested the ICJ to give a legal opinion on two questions on Chagos. India voted in favour of the Mauritius-backed resolution, which got 94 votes in favour, 15 against and 65 abstentions.

In February, India also submitted a written submission to the ICJ which dwelt in detail on the “historical facts” and the case for Mauritian sovereignty.

India’s whole-hearted support to Mauritius at the ICJ took place just a day before the Indo-US ‘2+2’ Dialogue in New Delhi, which among other things, will have a substantive discussion on Indo-Pacific. Washington has a considerable stake in the outcome of the ICJ proceedings as the US’s Indian Ocean military base has been located at Chagos Archipelago’s largest island, Diego Garcia, since 1966.

Speaking on Wednesday afternoon, Rajamony noted that the “analysis of the historical facts concerning the Chagos Archipelago and consideration of the legal aspects associated therewith confirm that the sovereignty of the Chagos Archipelago has been and continues to be with Mauritius”, which he added was also accepted by the UK. 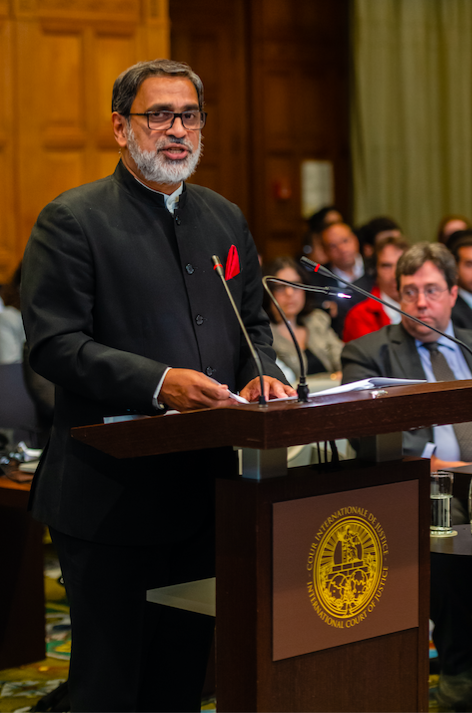 The Indian envoy stated that the process of decolonisation “remains incomplete both technically and in substance as long as the Chagos Archipelago continues to be under the colonial control”.

This was in reference to one of the questions posed by the UNGA which calls for an assessment on the implementation of relevant UN resolutions on decolonisation.

A key dispute between the UK and Mauritius is whether the leaders of the Indian Ocean island nation gave their assent to the 1965 agreement under duress, especially when full independence was just three years away.

In the immediate years after independence, Mauritius was too busy to consolidate its economic and ethnic problems and therefore only formally called on the UK to return the Chagos Archipelago in October 1980.

The UK, US, Australia, Russia, China and France have raised questions on whether the ICJ should be giving an advisory opinion, painting the Chagos question as a bilateral dispute and also raising the issue of lack of consent over jurisdiction from one of the main parties.

India has, however, argued that absence of action on the part of the UK in returning the Archipelago forced Mauritius to come before the ICJ through the UNGA. “Needless to mention that the United Nations is the highest and most relevant institution in matters affecting nations; and the international courts and tribunals are the most relevant judicial institutions,” said Rajamony.

When the UNGA resolution was passed in June 2017, India acknowledged that there are “security concerns” in the Indian Ocean that could arise over sovereignty of Chagos, but asserted that “it is a matter of principle for India to uphold the process of decolonisation and the respect for sovereignty of nations”. This aspect was not touched upon in India’s submissions to the ICJ – oral and written – as it is bound only to respond to the specific queries posed by the court.

While India would like to see the transfer of sovereignty, it is also wary of an Indian Ocean without the active presence of US Navy. Any power vacuum in the Indian Ocean will only be advantageous to the burgeoning Chinese presence, Indian government officials agree.

Nudged by New Delhi, Mauritius had given an assurance that the US could continue operating military facilities in Diego Garcia, even after sovereignty was reverted back to the Indian Ocean island nation.

“Mauritius has been clear that the request for an advisory opinion is not intended to bring into question the presence of the base on Diego Garcia, only one of the islands of the Chagos Archipelago. Mauritius recognises its existence and has repeatedly made it clear to the United States and the administering Power that it accepts the future operation of the base in accordance with international law. This is a solemn commitment on behalf of Mauritius and we trust the Court will recognise it as such,” he said.