The speeches from the two largest nations in South Asia on the fifth day of the United Nations General Assembly were markedly different.

New Delhi: Just two speakers after Prime Minister Narendra Modi had addressed the United Nations General Assembly, his Pakistani counterpart, Imran Khan, stood at the same podium and warned of a “bloodbath” in Kashmir after current restrictions on the people there are removed, even as he urged United Nations to push India to lift the clampdown.

The two speeches from the two largest nations in South Asia on the fifth day of the United Nations General Assembly were markedly different.

The tone and tenor of Khan’s remarks on India were stern, even harsh, and he attacked Modi by name on more than one occasion for the situation in Kashmir and for having targeted Muslims in Gujarat in 2002.

On Friday morning in New York, Modi read out his speech within the stipulated time of 15 minutes. It was largely about his election mandate, the welfare programs his government has launched and India’s initiatives to climate change.

Modi also spoke about terrorism – an issue that India always raises at almost every international forum –  but he didn’t name any country or specifically mention ‘cross-border terror’, the Indian short-hand for Pakistani comlpicity. “We believe that this is one of the biggest challenges of humanity and not of any country but of the whole world. A world divided in the name of terror hurts the principles on which the U.N. Is born. And therefore, for the sake of humanity, I consider it imperative for the whole world to be united, united against terror”.

India’s message to the world was “harmony and peace”, the prime minister concluded. This is only his second speech at the UNGA since September 2014. Incidentally, Modi had mentioned Pakistan by name in his speech at the UN that year.

Making his debut at the cavernous hall, Imran Khan took a different route. If he came with prepared remarks, he quickly jettisoned them, speaking extempore for over 40 minutes.

Khan spoke of three pressing global issues – climate change, the exodus of money from poor countries due to corruption by local elites, and Islamophobia – before coming to a fourth matter – the issue of Kashmir.

Most of the talking points in Khan’s speech had been lifted from his op-ed published by The New York Times last month. But, since he was standing in the UN General Assembly, Khan’s words were listened by the rest of the UN member states in silence, punctured by applause.

Imran Khan said the“number one action” the UN must take is to lift the “inhuman curfew” and free “all political leaders, especially those picked up 11,000 boys”.

“And then the world must give self-determination to [the] Kashmiris,” he added.

On August 5, the Modi government got parliament to change Article 370 of the constitution, thereby removing the special status the state of Jammu and Kashmir had enjoyed. Just ahead of the move, the centre imposed a strict lockdown of communications, restricted public movement and detained nearly all mainstream politicians, including former chief ministers. Since then, some restrictions have been removed, but internet and mobile services remain banned in the valley and there is no word of when the politicians and others will be released.

Khan asserted that the Modi government in its “arrogance” had assumed that there would be no protests once all the restrictions were moved. “They will be out on the streets. And what will the soldiers do. They will shoot them”.

“This has serious consequences. Look what is going to happen when the curfew is lifted,” he said.

He stated that in their place, he would have taken up arms. “I picture myself. I am in Kashmir. Locked up for 55 days. I have heard about rapes. Indian army going into homes. Would I want to live with this humiliation?  I would pick up a gun. You are forcing people into radicalisation. If people lose the will to live, what do they live for?”

Khan claimed that if there was a “bloodbath”, it would lead to radicalisation further in Kashmir and also the wider Islamic world.

“Whatever happens after curfew… Pakistan will be blamed. Another Pulwama would happen and Pakistan would be blamed. The jets may return, and the cycle would continue”.

Raising the nuclear bogey again, he said that “two nuclear armed countries will come face to face like we did in February”.

“And before that happens, the UN has the responsibility; That’s why UN came into being. I feel that we are back to 1939. Munich. When Czechoslovakia has been taken”.

Khan was referring to the 1938 Munich pact in which France and the UK allowed Hitler to annex Czechoslovakia.

“Is it (UN) going to appease a market of 1.3 billion or stand up for justice or humanity?”

He noted that if a conventional war begins, then Pakistan as a country seven times smaller than India, will be faced by a choice, either surrender or fight till. “My answer is … we will fight. And when a nuclear country fights to the end, it will have consequences far beyond its border”.

Khan added: “I am warning you. It is not a threat. This is a fair worry”.

The Pakistan prime minister also told the UN that there was a link between Modi, the Rashtriya Swayamsevak Sangh and the ideology of Nazism. This is not a new narrative, as it had been mentioned several time by Khan previously – in his op-ed and on social media.

Incidentally, Modi had complained to Trump about Imran Khan’s “extreme rhetoric” in a phone call on August 19. Subsequently, Trump had immediately called up Khan to tell him tone it down.

On Friday, however, Khan referred to Modi as a “life member of RSS”, which believes in “racial superiority” and that they “are an Aryan race like the [Nazis]”.

“It is an organisation inspired by Hitler and Mussolini. They believe in racial purity and superiority. They believe in the ethnic cleansing of Muslims and Christians. They believe a golden age of Hindu rule was stopped by Muslims and then the British occupation…You look at the founding fathers of RSS, Gowalkar and Sarvarkar. Google them and find out”.

He claimed that it was this “ideology of hate” which murdered the “great Mahatma”.

Taking direct aim at the Indian PM, Khan stated, “It was this ideology of hate allowed Modi to go for progrom that killed 2000 Muslims”. He alleged that the “previous Congress home minister gave a statement that in RSS camps, terrorists were being trained”.

He also reminded the UN that Modi could not travel to US till he was elected India’s prime minister.

Although the external affairs ministry spokesman tweeted a cryptic response to Imran Khan’s speech, India, as expected, utilised its right to reply later on Friday.

But then, not everyone feels that there is life beyond the jingoism of nuclear war, jihad, encouraging terrorism, war mongering, falsehood, deceit and misuse of the highest global platform. pic.twitter.com/p67KjjKFrS

The Indian diplomat claimed that Khan’s “divisiveness” and attempts to “stir up hatred” were “simply put – hate speech”.

“Rarely has the General Assembly witnessed such misuse, rather abuse, of an opportunity to reflect. Words matter in diplomacy. Invocation of phrases such as “pogrom”, “bloodbath”, “racial superiority”, “pick up the gun” and “fight to the end” reflect a medieval mindset and not a 21st century vision,” said Indian permanent mission to UN’s first secretary, Vidisha Maitra.

In his speech, Khan had said that UN observers were free to come and verify whether terror camps were being operated in Pakistan. India said that the “world will hold him to that promise”.

India noted that Khan’s “justification of terrorism was brazen and incendiary”, even coming the “leader of a country that has monopolised the entire value chain of the industry of terrorism”.

In a personal attack on Khan, Maitra said, “For someone who was once a cricketer and believed in the gentleman’s game, today’s speech bordered on crudeness of the variety that is reminiscent of the guns of Darra Adam Khel.” 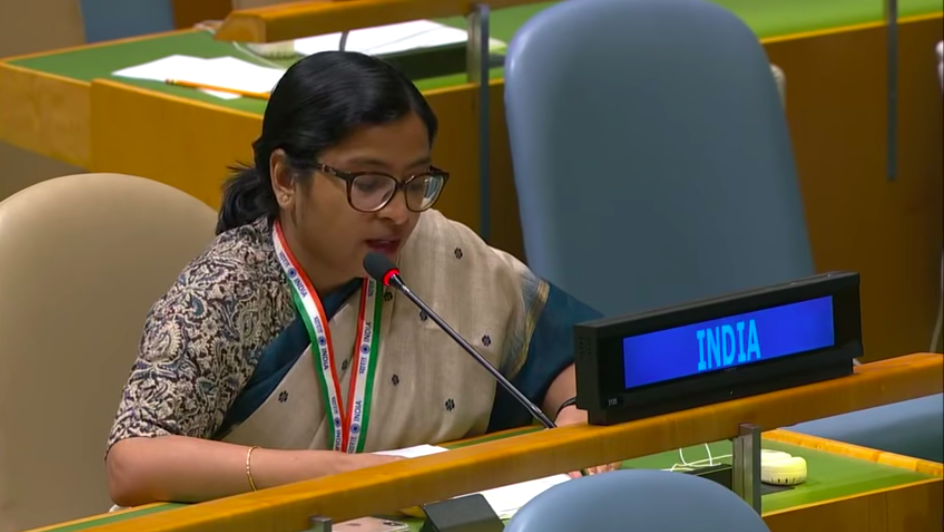 The Indian diplomat posed five questions to Pakistan. The first one was whether Islamabad could confirm that it was home to “130 UN designated terrorists and 25 terrorist entities listed by the UN, as of today”.

Referring to the Jaish-e-Mohammed supremo Hafiz Saeed, she asked whether Pakistan could acknowledge that it was the only government that provides pension to a UN sanctioned individual.

India also raised the issue of Pakistan’s Habib Bank being forced to shut down its New York branch due to claims over “terror financing”. In 2017, Habib Bank shuttered its New York branch as part of a broader settlement with New York State Department of Financial Services, which included payment of fine of $225 million.

India also dared the Pakistan prime minister to deny that “he was an open defender of Osama bin Laden”.

On Khan’s claim that Modi and India was planning a pogrom, the Indian diplomat pointed out that Pakistan had conducted a “gruesome genocide against its own people” in 1971. The Bangladesh Prime Minister Sheikh Hasina also referred to those events, she reminded the audience.

On the criticism of the changes to Article 370, she said that Pakistan’s “virulent reaction” stems from the “fact that those who thrive on conflict never welcome the ray of peace”.

“While Pakistan has ventured to upstream terrorism and downstream hate speech there, India is going ahead with mainstreaming development in Jammu and Kashmir,” said Maitra, adding that Indian citizens do not need Khan to speak on behalf of themselves. The 2008-batch Indian Foreign Service officer noted that Pakistan’s own treatment of minorities was highly questionable.

Further, she commented that Khan’s “threat of unleashing nuclear devastation qualifies as brinksmanship, not statesmanship”.

After delivering his speech, Modi had a couple of meetings with leaders of neighbouring states and then departed for India.

In total, he stayed nearly a week in United States for multiple events, the highlight of which – in the eyes of the government – was the ‘Howdy Modi’ event in Houston, for which US President Donald Trump flew down from Washington.