At Houston Rally, Modi, Trump Talk Terror, Economy, and Bat for Each Other Politically

The “words of Candidate Trump – Abki baar trump sarkar” had rung “loud and clear”, Modi said in a speech that was seen as a virtual endorsement of a second term for the US president. 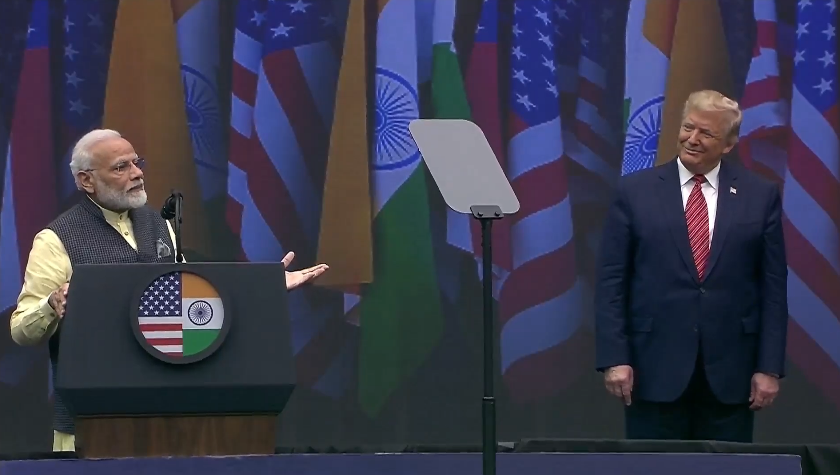 New Delhi: In front of a Houston stadium filled with Indian-Americans, US President Donald Trump and Indian Prime Minister Narendra Modi patted each other’s backs in a set of speeches that endorsed each leader’s claim that they had made great strides in transforming their respective countries.

With Trump and a group of Congress representatives looking on, Modi also brought up the recent scrapping of Article 370, which downgraded not just Kashmir’s constitutional position but also its status in the Indian Union. Though people in the Valley have been barred from accessing the internet or mobile networks since August 5, Modi declared, by way of a justification for the 370 move, “Now Kashmiris can enjoy the same rights that are given to the rest of India by the Constitution.”

The prime minister also emphasised a political talking point of the Indian government that Article 370 had led to a lack of development in Kashmir, which in turn was the main reason behind terrorism finding a place in the state.

Noting that both houses of Parliament had approved the move, Modi called on the audience to give a standing ovation for “all Indian members of parliament”. Trump’s reaction to this was not clear, as the television cameras did not pan towards him, but rather to the cheering audience.

While Washington has officially endorsed India’s position that the revoking of Article 370 is an internal matter, it has expressed repeated concern about continuing detentions and the communications blackout.

In his speech, Modi also took aim at Pakistan, pointing out that there were “some people” who could “not manage their own country”, but were unhappy at the developments in Kashmir and “nurtured terrorism”.

“Whether US’s 9/11 or Mumbai 26/11, where were their conspirators from? It is time that there should be a decisive fight against terrorism,” said Modi.

Trump is scheduled to meet with Pakistan Prime Minister Imran Khan on Monday in New York on the sidelines of the UN General Assembly. Trump has on several occasions expressed willingness to mediate between India and Pakistan, but so far New Delhi has not been willing to play ball.

Outside the stadium, Houston authorities had designated a separate zone for protestors, who were a mix of human rights activists concerned about the status of minorities, Kashmiri and Khalistani groups. Pakistani minister for Kashmir affairs and Gilgit-Baltistan Ali Amin Khan Gandapur had even flown down to Houston and spent around 15 minutes among the protestors, reported Houston Chronicle.

The US president got polite applause throughout his speech, but the most enthusiasm was shown after his mention of fighting illegal immigration.

Incidentally, the only standing ovation in Trump’s speech was when he said that US was “committed to protecting innocent civilians from the threat of radical Islamic terrorism”. Modi later asked the audience to give Trump a standing ovation for his stance on terrorism.

On Sunday morning, Trump arrived over an hour behind schedule for the biggest gathering of Indian Americans at NRG stadium, marketed as “Howdy Modi”. He was apparently late as he was being briefed about the heavy floods that hit South Texas last week.

Reports in The Washington Post and The New York Times both noted that Trump unusually played a “warm up act” to Modi, which was the first ever joint appearance by Indian and US leaders at a rally.

The Indian prime minister gave two speeches – an introduction to Trump, unusually delivered in English, and a follow-up one in Hindi after the US president.

While introducing the US president, Modi noted that Trump’s name “comes up in almost every conversation in the world on global politics”.

Modi’s bountiful praise of Trump and his policies was striking, as the US president is already in campaign mode for re-election in 2020. Modi’s generous remarks, some political observers noted, nearly seemed like approval for Candidate Trump.

“His every word is followed by tens of millions. He was a household name and very popular even before he went on to occupy the highest office in this great country. From CEO to commander to chief, from boardroom to oval office, form studio to global stage, from politics to security … he has left a deep and lasting impact everywhere,” Modi said.

The Washington Post described it as the “foreign strategy of soothing tensions with the United States by stroking President Trump’s ego”. In New Delhi, opposition Congress leader and former minister of state for external affairs Anand Sharma criticised Modi. “Your actively campaigning for Trump is a breach of both India and America as sovereign nations and democracies,” he tweeted. 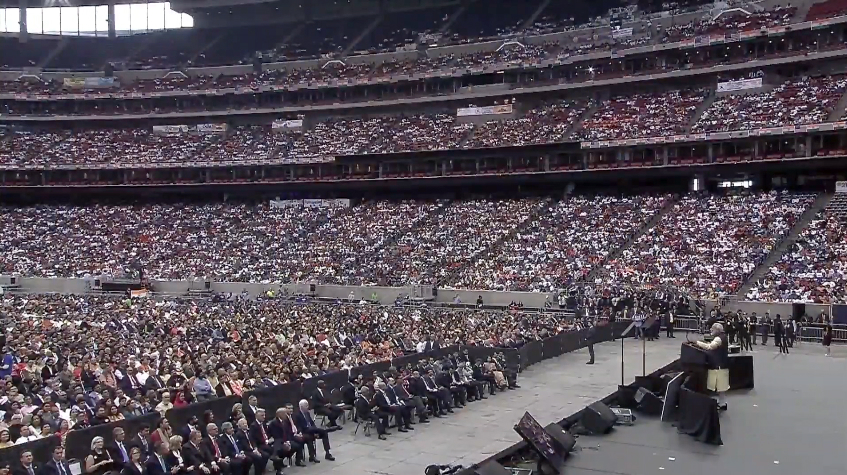 Praising him for his “energy” and “wit”, Modi asserted he admired Trump for his “sense of leadership, his passion for America, concern for every Americans and his strong resolve to make America great again”.

“And he has made the American economy strong again,” added Modi, as Trump smiled and nodded.

The US president has had a tough few days, after a whistleblower from the intelligence community accused him of trying to use the Ukraine president to launch an investigation against the son of former vice-president and Democrat presidential hopeful, Joe Biden.

Noting that Trump had “connected well” with India, Modi pointed out that the “words of Candidate Trump – Abki baar Trump sarkar” had rung “loud and clear”. It was a slogan that Trump had used, inspired by BJP’s 2014 catchphrase – to woo Indian American votes ahead of the 2016 elections.

Modi also said that the “celebration of Diwali in White House lit up millions of faces with joy and appreciation”.

In his speech, the US president  claimed that India “never had a better friend than President Trump”. “The prime minister knows that,” added Trump.

He also reciprocated with compliments. “Under PM Modi’s leadership, the world is witnessing a strong sovereign and thriving republic of India,” Trump said, adding that his government had lifted 300 million people out of poverty. A UNDP report, published in July 2019 had found that 271 million Indians went above the poverty line – but between 2006 to 2016. Modi became prime minister in 2014.

Trump spoke about how the bilateral relationship is stronger than ever before and grounded in common values. Like his rally speeches, he then spent some time to narrate his administration’s economic achievements – which include the “biggest tax reforms in the history of the country”. While talking about the drop in unemployment among different communities, the US president specifically mentioned that there was a 33% drop in unemployment among Indian-Americans.

There had been buzz of an imminent trade deal to be signed between India and US this week during Modi’s visit. But both the Indian PM and US president did not make any mention of such a possibility.

Modi had only indicated that he was hoping for “some positive results” in his discussions with Trump. He will meet Trump again on September 24 for a formal bilateral meeting in New York. . “President Trump calls me tough negotiator. But, he is a master of the Art of the Deal and I am learning a lot from him,” he stated. Trump had written a popular book called the Art of the Deal in 1987.

Trump was, however, happy to list some Indian investments in steel (JSW Steel in Ohio) and energy (Petronet LNG’s $2.5 billion investment), which would apparently bring thousands of jobs in US.

“India has never invested more in US than it is doing now. And it is reciprocal as the US is doing the same in India,” he said, largely reading from prepared remarks.

The real estate tycoon-turned-president stated that India had purchased $18 billion worth of defence equipment from the United States. “We make the greatest defence equipment…” He also listed next month’s first ever joint tri-service military exercise, Tiger Triumph, as an example of closer defence relationship. “Tiger Triumph…very good name”.

The US president stated that Mumbai would host the first ever NBA game for the first time next week. “Am I invited, Mr Prime Minister? I may come. Be careful, I may come,” he joked. Modi had reiterated his invitation for Trump to visit India with his family. Last year, India had invited Trump to be the Republic Day chief guest, but he had declined due to a scheduling conflict.

Trump received much applause from the Indian-origin audience when he started speaking out against illegal immigration. “Both India and the US also understand that to keep our communities safe, we must protect our borders,” he said.

The US president has been adamant about building a ‘wall’ across the border with Mexico and has authorised stringent action against captured undocumented immigrants, including the separation of families. “We are further taking unprecedented action to secure our southern border and stop illegal immigration,” he said.

In 2016, nearly 84% of Indian-American voters cast their ballots for Democratic candidate Hillary Clinton, with just 14% voting for Trump. While many Indian-Americans may be supportive of Trump’s economic policies, they have remained wary of his anti-immigration rhetoric, including the tightening of H1-B applications.

Republican senator from Texas, John Cornyn told reporters that Trump’s presence at the Houston rally was not surprising, given the political reality.

“Politics being what politics is, it’s really important to show up and to listen respectfully and try to find common ground with these constituents…I don’t think it’s any accident the president decided to come,” said Cornyn, who was one of three senior US politicians who spoke at the rally.

Just like Trump, Modi also listed out his government’s achievements, reeling out figures from rural sanitation to financial inclusion and road connectivity.

He claimed that the recent cut in corporate tax rates received special praise from chief executive officers of oil and gas companies who met him at a roundtable on Saturday.

Modi asserted that no other Indian government had a higher average annual growth rate than in the last five years, which he stated had been 7.5%. The current atmosphere in India, he said, was of low inflation, low fiscal deficit and high growth.

He repeated several times that the presence of the US president was “unprecedented”. “We are making history.”

At the end of the event, both leaders took a lap around the stadium, their hands held together and up in the air, to roaring chants from the crowd.

As Trump sped to his plane in a cavalcade, he re-tweeted several positive tweets that showed the size of the crowd at the Houston Stadium.

The organisers had invited congressional representatives from both parties to give a bipartisan colour to the evening. In total, 21 US politicians showed up, which included four senators and one governor. There were 13 Republicans and nine Democrats.

The senior-most Democrat, House Majority leader Steny Hoyer, who gave a speech with Modi standing next to him, underlined that the aim to bring India and the US closer has “remained bipartisan with both Democrats and Republicans working together”.

He was also the only one at the event who expressed gentle concern that both India and the US had still to fully meet the ideals of their founding father.

Hoyer said that India, “like America, proud of its ancient traditions, to secure its future as per Gandhi’s teachings and Nehru’s vision of democracy, where respect for pluralism and human rights safeguard every individual”. Hoyer invoked Nehru and Gandhi a second time when he referred to the famous quote to  “wipe every tear from every eye”.

The second-ranking Democrat in the House of Representatives felt that “Americans and Indians must strive to make our promises and aspirations a reality for all our citizens”.