Given India's Military Ties With Israel, Modi Would Have Had No Problem Acquiring Pegasus

In all likelihood, the sale of Pegasus to India was possibly intended to ensure that the symbiotic strategic and security grid between the two countries continues apace. 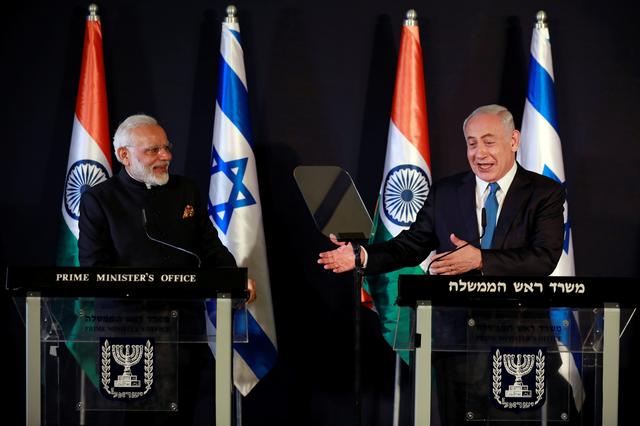 Chandigarh: The reported deployment by India’s government of Israeli military-grade Pegasus spyware to monitor smartphones belonging to the country’s opposition politicians, journalists, lawyers and civil rights activists amongst others, is one more instance of the ever proliferating – but always covert – cooperation between New Delhi and Tel Aviv in the defence and intelligence sphere.

In Israel, Pegasus, which is considered among the world’s deadliest spyware tools for smartphones given its zero-click capability, is classified as a weapon, and hence officially transferable only to governments. Consequently, its sale to any country, like all other Israeli materiel exports, requires the Ministry of Defence’s approval.

This hugely expensive spyware – estimates for its deployment cost range from $25,000 to $50,000 per target with limits on simultaneous deployment, in addition to hardware and installation costs – is every ‘snooper’s dream.

Pegasus gives the attackers who use it total access to targeted smartphones, including their conversations, data, images, photographs, camera and geolocation. Pegasus operators can even  activate a target phone’s  inbuilt microphone when not in use, enabling its operators to listen in to offline conversations.

The Pegasus malware was specifically developed by cyber-arms firm NSO Group Technologies located at Herzliya near Tel Aviv, which takes its name from its three founders – Niv, Shalev and Omri. The NSO trio are former members of Unit 8200 of the Israeli Intelligence Corps, tasked with gathering signals intelligence.

This specialised unit – also referred to as the SIGINT National Unit – operates autonomously under Israeli Military Intelligence, better known as Aman, but functions independent of the country’s three armed services. Most militaries and security agencies consider Unit 8200, which fields Pegasus, as one of the world’s foremost technical intelligence agencies, on par with the US’s National Security Agency in its overall capability, despite its far smaller size. Understandably, the skills by the three NSO owners in creating Pegasus, remain formidable.

Last week, however, a group of 17 media organisations from around the world, including The Wire,  Washington Post and The Guardian, simultaneously revealed via the umbrella ‘Pegasus Project’ a list of 50,000 telephone numbers that were earmarked for potential surveillance by NSO clients for at least two years, till mid-2019.

Other than the numbers of known criminals and terrorists – to battle whom the NSO malware is believed to have been originally created – the list included heads of state, leading politicians, human rights activists, journalists, diplomats and businessmen and others from various countries. Besides India, these included Egypt, France, Iraq, Lebanon, Mexico, Morocco, Pakistan, South Africa, Uganda and Yemen and some 13 other countries across Europe, North Africa and the Middle East.

Pegasus Project’s credibility was further reinforced by Amnesty International’s Forensic Laboratory that scientifically examined some of these specified smartphones, including some from India, confirming beyond reasonable doubt their infiltration by the Israeli malware. On Saturday, the CEO of WhatsApp, Will Cathcart confirmed to the Guardian that the Pegasus targets his company had identified in 2019, included government leaders and officials,

Ever since the Pegasus Project revelations surfaced on July 18, the Indian government has at best been ambivalent or at worst duplicitous over whether New Delhi had or had not acquired Pegasus. This was because the list of 300 verified India numbers included Indian Opposition leaders, civil servants, businessmen, journalists and even a woman who had accused the former chief justice of India of sexual harassment.

Government ministers in New Delhi have dismissed the allegations of snooping via Pegasus as ‘baseless’ and ‘motivated by the ubiquitous ‘foreign hand’, but dissembled on whether Prime Minister Narendra Modi’s administration had actually procured and domestically deployed Pegasus 2017 onwards against its political opponents, critics and assorted dissidents.

India’s newly appointed Minister of Electronics and Information Technology (IT) Ashwani Vaishnaw and his immediate predecessor Ravi Shankar Prasad stridently quoted the IT and Telegraph Acts, to iterate their claim that all electronic interception in defence of national security had followed due process of law. But the two and some other senior ministers doggedly refused to confirm or deny whether, indeed, the government had acquired Pegasus for this purpose or executed eavesdropping – which they tacitly conceded – via indigenously developed software.

However, in an earlier obfuscation, the IT minister had informed parliament that the Indian Computer Emergency Team (CERT-In)taken note of the threat posed by Pegasus and its impact on Indian users. This, in turn, raises a disturbing question: if in reality India had not acquired Pegasus, why would the government seek its operational details and outcome. Or was the former IT minister hinting that India was the victim of snooping? But if so, why would a power inimical to India spy on mediapersons, activists and government officials concerned predominantly with localised issues?

“Considering the government’s response to the Pegasus Project, it’s highly unlikely that it will ever admit to acquiring the malware or order an inquiry into the snooping allegations,” said a former senior security official. In all likelihood, he stated, declining to be identified, the government will brazenly pursue its  strategy of incessant denial, wearying all parliamentary and media demands for an investigation. And even if a judicial review into the matter was by some miracle instituted, as demanded by the Opposition, he lamented that the government could easily resort to exploiting national security as its alibi to frustrate and stymie all further scrutiny into the matter.

Be that as it may, security and military sources indicate a ‘strong possibility’ of India having acquired NSO’s Pegasus in 2017 considering the close strategic, military and security links between Delhi and Tel Aviv.

Over the past three decades India has steadily emerged as Israel’s largest materiel and security-related equipment provider worth an estimated at $7-8 billion just between 2009-18. Israel has either transferred military kit directly or indigenously manufactured it via collaborative ventures through a transfer of technology. Retired military officers concede that Israeli access to India’s defence sector to be ‘awesome’ and one which service officers remained helpless to restrict or dilute as it is staunchly supported by the BJP administration.

Presently, Israel is India’s fourth largest armaments provider after Russia, the US and more recently France following the $7.92 billion acquisition of 36 Dassault Rafale fighters in late 2016. These weapon and related equipment sales have increased significantly after the BJP government assumed office in 2014. Modi was also the first Indian prime minister to visit Israel in July 2017.

But despite this rapidly proliferating strategic and military association that has emerged as Israel’s most significant in Asia, it is one that remains deeply shrouded in secrecy, operating in an undefined smoke-and-mirrors environment. Israel instinctively goes to great lengths to play down this strategic freemasonry with India, while the latter responds similarly for fear of straining ties with Arab states and Iran, upon whom New Delhi depends for nearly 70% of its hydrocarbon imports.

And though the diplomatic, political and security environment has changed recently in West Asia, with states like the United Arab Emirates (UAE) establishing formal ties with Israel, and even Saudi Arabia making overtures to Tel Aviv, New Delhi continues to mechanically and inexplicably pursue a cloak-and-dagger approach to all bilateral military, materiel procurement and intelligence issues with Israel. Reciprocal visits to New Delhi and Tel Aviv by defence, security and intelligence officials, Defence Research and Development Organisation (DRDO) technicians and scientists and armament company executives too remain strictly under wraps, as does all bilateral military commerce executed through the private or public sectors.

Also read: How India Has Moved With Israel: A Timetable of Milestone Events

Before 1992 Israel reportedly assisted India stealthily, providing it limited military aid and weaponry during its brief, albeit disastrous war with China in 1962 with its Chief of Staff, General David Shaltiel, visiting Delhi surreptitiously in 1963. Israel provided similar, albeit limited assistance during India’s subsequent conflicts with Pakistan in 1965 and 1971, largely through ammunition supplies.

Clandestine ties continued thereafter with senior Indian security officials travelling to Israel via Cyprus – as no direct air links between the two countries existed – to ensure that their passports would have no record of their visit to the Jewish state. However, after Prime Minister Indira Gandhi’s assassination in 1984, India is believed to have sought, and secured Israeli help in upgrading its VIP protection by training and arming its newly raised Special Protection Group and National Security Guard personnel. These commandos too reportedly utilised the Cyprus route. Israeli specialists also seemingly devised former Prime Minister Rajiv Gandhi’s security architecture that broadly continues with minor alterations for his successors, including Modi.

But the disintegration in the early 1990s of the Soviet Union, India’s long-standing ally and principal weapons supplier was a turning point in New Delhi’s military ties with Israel. Crucial supplies of arms and spares for military equipment either ceased or were interminably delayed, as overnight numerous suppliers found themselves located in independent neighbouring republics that were inimical to Moscow. Consequently, India was compelled to consider alternate materiel sources at a critical period that coincided with the eruption of Kashmiri insurgency in late 1989.

The establishment of official diplomatic ties with Israel in January 1992 under then Prime Minister Narasimha Rao enabled both sides to fast track their strategic and defence relationship based on mutual security and commercial interests. Israel, for its part, rightly perceived a lucrative commercial opportunity, while India looked upon Tel Aviv as a reliable materiel provider, especially of varied ammunition and missile systems which India’s military badly lacked and still does.

Nonetheless, it still took another six-odd years and the BJP’s ascent to power under then Prime Minister Atal Bihari Vajpayee for Israel’s defence machinery to definitively establish itself in India, second only to the Russians and thereafter to the US and France. Being a ‘closet’ nuclear weapon state, Israel’s decision not to condemn India’s May 1998 Pokhran nuclear tests also helped considerably, further endearing Tel Aviv to New Delhi and vice-versa. 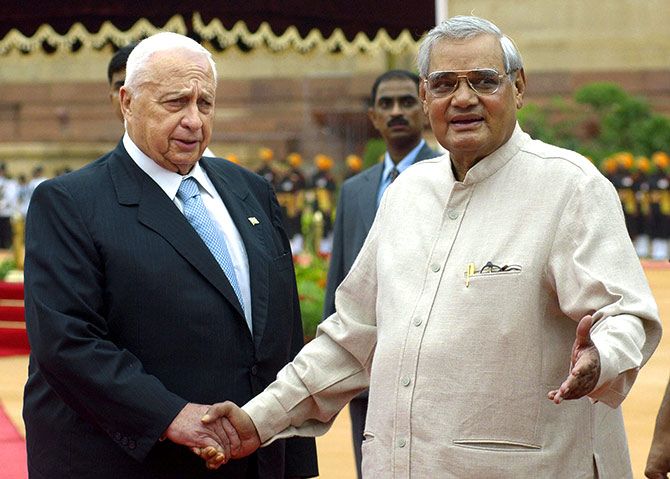 However, it was India’s 11-week long Kargil war with Pakistan in 1999 that catapulted Israel’s defence industry to centre stage domestically. As the seriousness of the deadly conflict unfolded, commercially savvy Israel dug deep into its military reserves to supply India high-end hardware especially badly needed 155 mm howitzer rounds for its 155mm Bofors guns, laser-guided munitions and other ordnance that contributed largely to the Pakistan Army vacating the mountainous regions siege and ending hostilities.

Soon after, Israel began claiming its dues in materiel and related force multiplier equipment sales and continues to do so, prospering greatly in the process.

Alongside, the Indian military exhibited interest in the Israel Defence Forces’ successful warfare strategies and concepts, particularly with regard to countering armed insurgencies. Intelligence sharing on terrorism issues also proliferated, as did Israeli military training assistance to India’s Special Forces. The rationale that Israel and India shared similar, but un-publicised, concerns over threats posed not only by a nuclear-weapon capable and increasingly Islamised Pakistan, but the rapid radicalisation of its society and armed forces further cemented bilateral security and military ties.

Israel is also believed to have provided India with counter-terrorism assistance to help it deal with the Kashmiri insurgency in the early 2000s. It made available over a dozen technical teams to assist India in augmenting its border intelligence gathering capabilities, in addition to anti-terrorism counter measures like upgraded border fencing, ground sensors and handheld thermal imagers for use by army and paramilitary border guards.

In all likelihood, exporting Pegasus to India was possibly intended to ensure that this mutually beneficial symbiotic strategic and security grid between the two countries continues apace.