In a veiled reference to China, leaders at the the first Quad summit pledged to promote a “free, open rules-based order, both in the Indo-Pacific and beyond”. 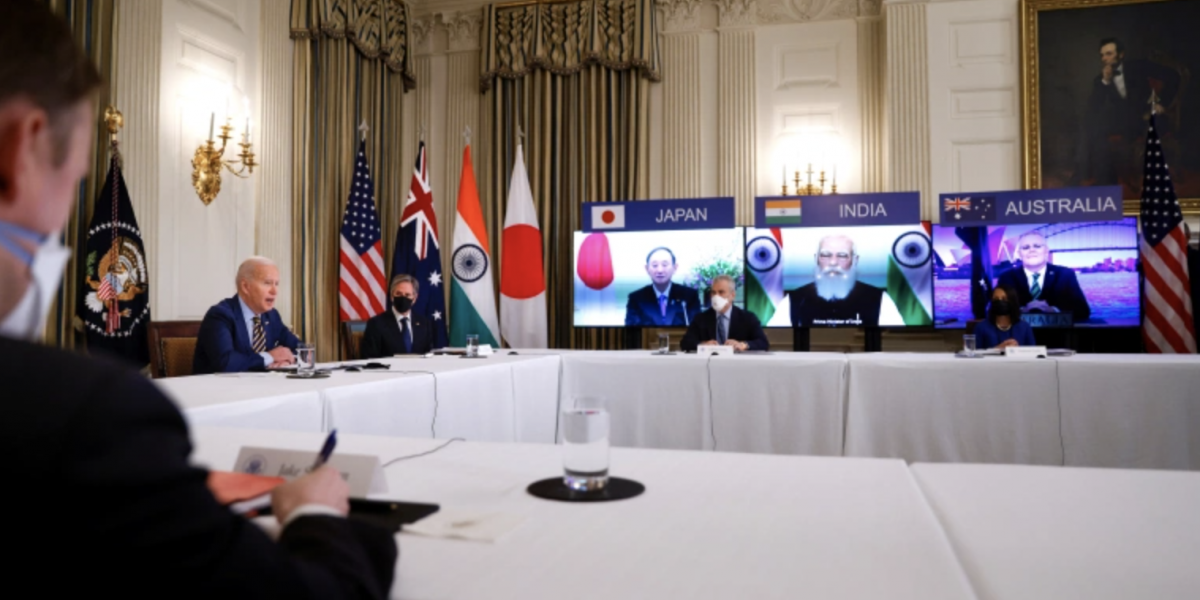 New Delhi: Meeting for the first time, the leaders of the four ‘Quad’ countries – India, Japan, United States and Australia, agreed to commit to manufacturing one billion doses of vaccine by 2022 for distribution in Asia, where China’s presence casts a large shadow.

While all of them had spoken on the phone with each other, this was the first virtual meeting of the four leaders – Indian Prime Minister Narendra Modi, US President Joe Biden, Japanese PM Yoshihide Suga and Australian Prime Minister Scott Morrison. The summit had been proposed by the US within the first weeks of the new Biden administration taking over earlier this year.

The virtual meeting marked the most significant upgrade to the ‘Quad’ format, which began first in 2007 as a tentative grouping of officials from four countries who had coordinated the disaster relief to the Indian Ocean tsunami and earthquake of 2004.

After the first Quad summit, there was also a joint statement, with the poetic title – “Spirit of the Quad”. While this is standard practice for most multilateral meetings, it has significance for the Quad as previous gatherings at various levels generated separate press releases from the four countries’ foreign offices.

“Quad has come of age. It will now remain an important pillar of stability in the region,” asserted Modi, in his opening remarks.

The summit’s big banner outcome will be focussed on the large number of one billion COVID-19 vaccine doses. The US and Japan will contribute to the funding to expand India’s manufacturing capacity, while Australia would provide the logistical support to strengthen access and ‘last-mile’ vaccine delivery in Southeast Asia and the Pacific.

A fact-sheet to supplement the joint statement stated that the US Development Finance Corporation will work with Hyderabad-based Biological E. Limited to finance increased capacity to “produce at least 1 billion doses of COVID-19 vaccines by the end of 2022 with Stringent Regulatory Authorization (SRA) and/or World Health Organization (WHO) Emergency Use Listing (EUL), including the Johnson & Johnson vaccine”.

The leaders also put their stamp on the creation of three new working groups. The first one will comprise of vaccine experts to devise the implementation plan, followed by two other working groups on climate change, and critical and emerging technology.

They also promised to meet again before the end of the year “in-person”.

As usual, when the Quad meets, there was a lot of talk of shared “democratic” values.

“We bring diverse perspectives and are united in a shared vision for the free and open Indo-Pacific. We strive for a region that is free, open, inclusive, healthy, anchored by democratic values, and unconstrained by coercion,” reads the Quad joint statement.

While the aim of this Quad summit was to publicly brand it with a highly-ambitious international vaccine initiative, it was clear the leaders did spend some time on China behind closed doors.

Ahead of this meeting, Chinese foreign ministry spokesperson Zhao Lijian said that China hoped that “relevant countries” will refrain from forming “closed and exclusive ‘cliques’ and not target the interests of “any third party”.

The Indian foreign secretary Harsh Vardhan Shringla said today’s “constructive and positive outcome” from the summit should “put to rest any speculation against Quad’s activities directed against any state or other”.

In Washington, the US national security advisor, Jake Sullivan, told reporters: “The four leaders did discuss the challenges posed by China. They made clear that none of them have any illusions about China, but today was not fundamentally about China”.

The Japanese prime minister tweeted that there had been consultations on “China’s unilateral attempts to change the status quo” during the meeting, along with Myanmar and North Korea.

In language pointing at China, the joint statement said, “We will continue to prioritise the role of international law in the maritime domain, particularly as reflected in the United Nations Convention on the Law of the Sea (UNCLOS), and facilitate collaboration, including in maritime security, to meet challenges to the rules-based maritime order in the East and South China Seas”.

Sullivan also said, in context of the forthcoming meeting with China in Alaska, that US officials will raise concerns about China’s activities “whether it in Hong Kong, Xinjiang or Taiwan strait or frankly that we heard today from our quad partners – their coercion of Australia, their harassment of Senkaku islands, their aggression at the border with India”.

He also noted that the discussions also featured the cyberattack on the Microsoft Exchange, which is believed to have originated from China.

Asked whether the military stand-off with China in eastern Ladakh was brought up, Shringla, India’s top diplomat, said that contemporary issues of Indo-Pacific were discussed but refused to mention them specifically on the grounds of confidentiality.

However, sources stated that the matter did come up when the region was discussed, with other leaders expressing a sympathetic view over India’s LAC friction with China.

On Myanmar, the Quad leaders emphasised “the urgent need to restore democracy and the priority of strengthening democratic resilience”. “Quad leaders felt that given their strong democratic credentials, it was important to work towards the restoration of democracy in Myanmar,” said Shringla.

In their opening remarks, the four leaders brought in their national traits and priorities. Biden referred to his $1.9 trillion “American Rescue Plan” to jump-start the economy, while Modi claimed that he saw Quad’s vision as an extension of the Indian philosophy of ‘Vasudhaiva Kutumbakam’.

Out of the four leaders, only Australian PM Scott Morrison mentioned the Southeast Asian group. He said that the Quad had to bring in more partners to share in the vision “as expressed through ASEAN, for an open, inclusive — inclusive, and resilient Indo-Pacific; to respect and support their sovereignty, independence, and security by upholding our values and supporting international law.”

The return of the Quad

After addressing the other leaders as “Joe, Mr. Modi, and ScoMo”, Japanese PM Suga said that he felt “emotional” to witness the Quad holding their first full-fledged summit.

After several rounds of meeting in 2007, it fizzled out due to changing national priorities of some of the members and a bellicose reaction from China.

After a gap of ten years, the ‘Quad’ returned in November 2017, when joint secretary-level officials met on the sidelines of the ASEAN Regional Forum (ARF) in Manila. The countries met against the backdrop of nearly all of them being more dependent on Chinese supply chains and China being among their top two trade partners.

All four members are heavily reliant on Chinese supply chains, and each of the four are significantly more economically integrated with China than with one another, especially India and Japan. China is the first or second-largest trading partner for all four countries, underscoring the risk of angering Beijing

It set the ball rolling, with the grouping then meeting fairly regularly. The first meeting of the Quad foreign ministers was held in 2019 in New York. After two more ministerial meetings, the Quad countries felt that it was time for the final upgrade.

“This is a natural evolution,” said Shringla. He didn’t want to commit to whether the Quad will now take on more formal structures in the future. “We already have announced the working groups. Let’s see how it evolves as more summits are held in future”.

India had earlier remained wary of giving an overt ‘anti-China’ character to this group or raise hackles in Beijing. But, the un-resolved border stand-off with China, which caused to death of 20 Indian soldiers, presumably lead to a slight change in policy. In November last year, Australia joined India, Japan and United States for the Malabar naval exercises.

Sullivan asserted that the Quad was “not a military alliance”, nor the “NATO despite some of the propaganda out there”. “What it is, is an opportunity for these four democracies to work as a group & with other countries on economics, technology, climate & security,” said the senior US administration official.

From the first meeting in 2017, the Quad countries in their separate press releases started to emphasise certain common phrases – “free and open Indo-Pacific”, “freedom of navigation and overflight”, “rules-based order” and “respect for international law”. However, India did not immediately jump onto that bandwagon of “free and open Indo-Pacific” and the other buzzwords at the first . 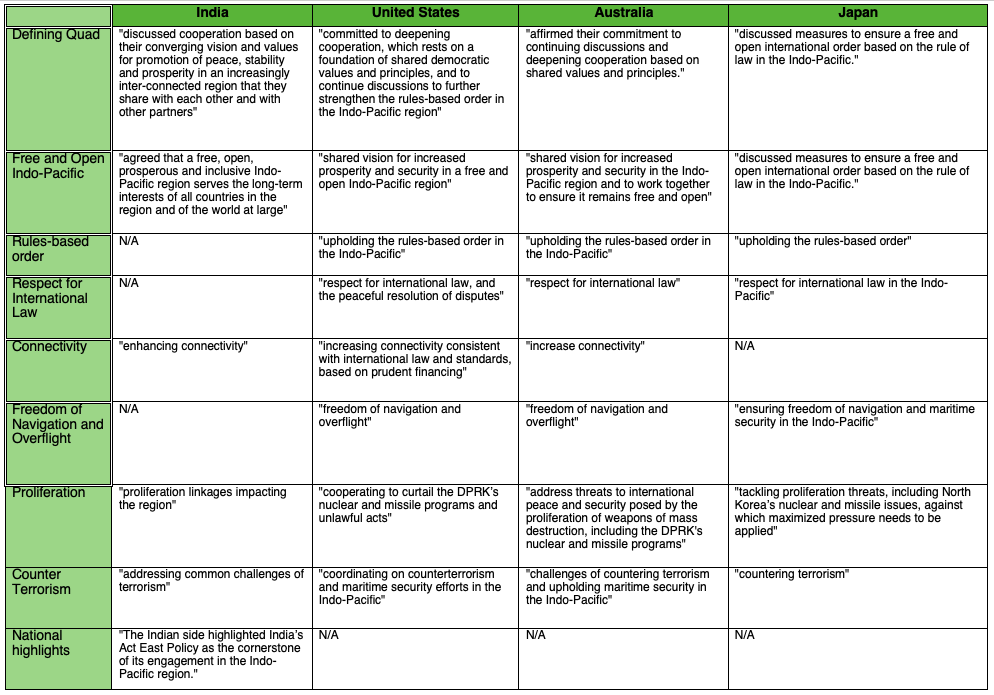 With rest of the regional countries wary of the nature of the resurrected Quad, the second meeting in June 2018 of the senior officials for the first time mentioned support for “ASEAN centrality” and “ASEAN-led mechanisms”. It was only from the third meeting of the renewed Quad platform that the key catchphrases of ‘Quad’ made their appearance in the MEA press release. They largely remain unaltered in the first ‘Quad’ joint statement.