Several factors, like the economy, the choice of venue and the Kashmir decision are at play. 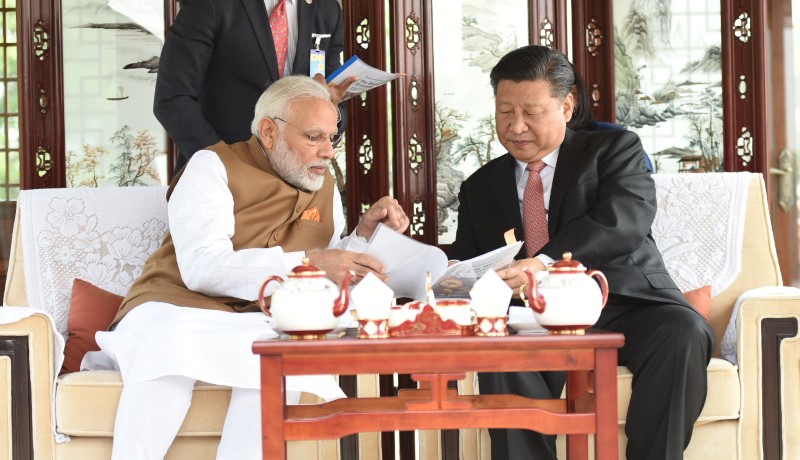 New Delhi: Prime Minister Narendra Modi and Chinese President Xi Jinping will spend around seven hours together for their second informal summit over Friday and Saturday.

The leaders hold sway over the collective fates of over two billion people, making their meetings always significant. However, given the complicated international scenario and even more complex bilateral factors, the act of noting any progress in the relationship would require an abundance of patience.

The Wire analyses the key questions in play.

What is an ‘informal’ summit, as opposed to a normal summit?

In 2017, relations between India and China were probably at the lowest they had been in recent times due to the military stand-off at Bhutan’s Doklam region.

While the two armies eventually withdrew to earlier positions, the jolt to the relations continued to be felt. The political leadership had to press the ‘reset’ button – and it was felt that they needed to do it face-to-face.

But, whenever two leaders meet, there is always a lurking pressure to demonstrate the success of the meeting with ‘deliverables’. The ‘informal’ tag to the summit is a result of doing away with this practice.

This means that the protocol trappings – a red carpet or flags on the table – remain, but there won’t be days of negotiations to announce a slew of agreements or issue a joint statement. Instead, both sides will issue separate joint press releases summarising the content of the discussions as per their national priorities.

Why was Mamallapuram chosen as the venue?

Along with the picturesque value, the infrastructure of the venue needs to be robust enough to not buckle under the temporary migration of thousands of government, security and media personnel. In India, there are also considerations of political affiliation – with the centre preferring a BJP-ruled state as it would help to have local administration on its side to roll out the red carpet.

Other cities in the running were Varanasi, Udaipur and Mumbai. Udaipur was a Beijing favourite, but it was felt that the infrastructure there may not be adequate.

Mamallapuram, with its proximity to the metropolitan city of Chennai, fulfilled nearly all the criteria.

It is a historical venue, which had proven links with China going back to as many as 1,300 years. There are indications that the Chinese monk Hiuen Tsang, who visited the Pallavan capital of Kanchipuram, may have also visited Mamallapuram. The last well-known Chinese leader to visit the town was Chinese premier Zhou Enlai in 1956.

China president Xi Jinping was also a governor of Fujian, where newly-discovered Tamil inscriptions and sculptures show the presence of thriving and prosperous Indian trading community from the 10th to 13th centuries.

Tamil Nadu is also a hub of Chinese investment, with several Chinese firms having their factories in the industrialised southern state.

Did the Wuhan summit in 2018 deliver what it promised – a reset based on directions from the very top?

At the end of Wuhan informal summit, foreign secretary Vijay Gokhale had said that main takeaway was that the two leaders had agreed to improve “strategic communication” at all levels. Further, the Indian press release noted that the two leaders had given “strategic guidance” to the military to strengthen communication and cooperation – an important marker in the post-Doklam period.

Speaking to The Wire a few days after the Wuhan summit, former National Security Advisor Shiv Shankar Menon had also underlined the significance of a stand-alone summit as a way to signal the importance of the relationship to a domestic audience.

“In a structured system like the Chinese system, most ordinary Chinese would assume that none of this would happen without the approval of the leadership. So it is important that the leadership is seen saying ‘No, that is not the kind of relationship we are looking for with India’.”

There is largely a consensus that the India-China relationship did have a relatively good year after the debacle of Doklam.

Also read: What Chess and ‘Go’ Tell Us About India and China’s Strategic Thinking

Former Indian ambassador to China and director of Delhi-based Institute of Chinese studies, Ashok Kantha agreed that the Wuhan summit did help in ensuring that relations were “back on an even keel”. “We saw strategic guidance being given to border forces resulting in more coordination at ground level. The number of incidents seem to have come down,” he noted.

The only serious incident took place last month on the banks of the Pangong Tso lake, but the face-off ended within a day.

Jawaharlal Nehru University professor of Central Asian Studies, Alka Acharya, also noted that when issues become intractable, “this kind of event sends a signal down the line”. “At the end of the day, the important thing is that you jaw-jaw, rather than war-war, and that you continue to convey that this is important to both. That this is being held despite many people continuing to pour cold water on the whole thing is also significant,” she noted.

Similarly, political scientist and China scholar Manoranjan Mohanty, described the informal summit as an “useful exercise”. “There was much scepticism last year. But it did turn out to be a key baseline in setting parameters for overall relations,” said Mohanty, who is an Honorary Fellow at Institute of Chinese Studies and the author of book, China’s Transformation: The Success Story and the Success Trap.

The run-up to the Mamallapuram summit has been eventful – with diplomatic exchanges over Kashmir, military exercises and the Pakistan prime minister’s Beijing visit. Will they cast a shadow?

There had been a lot of speculation in the run-up to the summit this weekend over “complications”. The buzz intensified as both sides took their time to formally announce the summit dates. Ultimately, the formal announcement was made on Wednesday morning.

In August, India changed the constitutional status of and bifurcated Jammu and Kashmir into two Union Territories. China sharply reacted to the developments by describing the creation of a separate Union Territory of Ladakh as “unacceptable”. India responded by terming it as interference in its internal affairs.

There was also visible sparring at New York, when India’s envoy to the UN expressed surprise that the Chinese envoy had sought to give the impression that his statement to the media was a reflection of the consensus arrived at behind the closed doors of a Security Council discussion on Kashmir. China had proposed that the Security Council hold the discussion in the first place.

Since then, there have been other pin-pricks. There are reports that China protested against the holding of an Indian military exercise at Arunachal Pradesh, while India verbally objected to a Chinese envoy’s remarks supporting Pakistani position on Kashmir.

Pakistan prime minister Imran Khan’s visit to Beijing – and the joint press release with the advocacy of UNSC resolutions for Kashmir – is also seen as no coincidence.

Pakistan-China relations have gone from strength to strength & CPEC is a reflection of our mutual commitment to this enduring relationship.

“This shows that we should have no illusion of a China-Pakistan relationship. It is a relationship on which China has invested heavily and based on which it is willing to disregard some of our concerns,” said Kantha.

Indian sources had said that Modi will not raise the issue of Article 370, but would explain the Indian position should President Xi seek a clarification.

Kantha stated that both countries have serious concerns about third country relationships. While India looks anxiously at ties between China and Pakistan, whose salience has increased, Beijing also looks askance at closer India-US ties and the rising role of the Quad.

Recently, the four foreign ministers of the Quad countries – India, US, Japan and Australia – met together for the first time in New York. “India is obviously through the Quad hoping to bring the US as some kind of leverage,” said Acharya, who has been nominated to India-China Eminent Persons Group and as a member of National Security Advisory Board.

According to Mohanty, both neighbours have found a way to handle their interactions in spite of the Pakistan angle. “But they may still have to discuss the Kashmir issue. That the consequences may include the spread of violent reactions to the Indian action in Kashmir has to be reckoned with,” he said.

What should be India’s expectations from the second informal summit?

Government sources had indicated on Wednesday that the Indian side would be raising the issue of trade imbalance, discuss possible new border confidence building measures, increase people-to-people contacts and raise the need to combat terrorism jointly.

Speaking to The Wire, Mohanty outlined four possible areas for India and China to scout for opportunities during the informal summit.

The former Indian ambassador also concurred that while additional confidence-building measures were satisfactory, there was a need to clarify the Line of Actual Control. The process remains stalled as China has not agreed to exchange maps that show their perception of the boundary.

All three experts that The Wire spoke to, collectively concurred that trade and economic ties should get the spotlight in Tamil Nadu.

“I think the more immediate issue is how to sort out the economic imbalance. Maybe we should take a final stand on the 5G issue,” said Acharya.

With trade issues being an integral part of geopolitical positioning, India and China also have to deal with a highly fluid scenario internationally. For example, there is still no end line in sight for the US-China trade war, with talks still to resume.

Also read: Caught in the Crossfire: American Consumers and the US-China Trade War

Similarly, Kantha expected trade to get “some fair amount of attention at Mamallapuram”. He pointed out that there was some talk of a new high-level dialogue being launched on economic issues.

In recent months, China has allowed some Indian drugs into the Chinese market, but Kantha noted that this “cannot be incremental”. India should push for a “time-bound” market access to China, as “we have been discussing it for ages”.

He suggested that there should be more “investment-led” trade expansion. Right now, most of the money from China is being invested in internet economy firms. “The 5G is only part of the entire issue…Telecom is a larger basket of projects. We are already getting 70% of global imports from China”.

There has to be more linkages between India and China in global supply chains – and more shifting of manufacturing capacity to the South Asian state, posited Kantha.

The Chinese ambassador to India, Sun Weidong said that Chinese investment in India stood at $8 billion, with over 1,000 Chinese firms investing in industrial parks, e-commerce and other areas, and creating 200,000 local jobs.

India has not yet taken a decision on whether to allow Chinese state telecom major Huawei to take part in trials for 5G services. The US has been asking countries to ban the Chinese firm from 5G services over security concerns. While India does have security concerns, the Indian industry has been largely in favour of allowing Chinese firms due to the cost factor.

The Chinese president is expected to push India to give the green signal for the multilateral Regional Comprehensive Economic Partnership (RCEP) to take shape, even as New Delhi has concerns that Chinese goods would flood its markets due to reduced tariffs.

India wants China and other countries to provide more access in investments and service in the trade agreement. “We want to see how much flexibility China is willing to show, so that we can accommodate their concerns,” said government sources on Wednesday.