After Erdogan Supports Pakistan on Kashmir, India Asks Turkey Not to Interfere

India said Turkey should “develop proper understanding of the facts” and that 'terrorism emanating from Pakistan' poses a grave threat posed to India and the region.

New Delhi: After the Turkish president’s visit to Pakistan led to Recep Tayyip Erdogan reiterating his opposition to India’s steps in Kashmir, New Delhi on Saturday stated that Turkey should “develop proper understanding of the facts” and stop interfering in internal affairs of other countries.

During Erdogan’s visit to Islamabad, a joint declaration of the Pakistan-Turkey high-level strategic cooperation council made a specific reference to Kashmir.

“The two sides underscored need for resolution of all outstanding disputes between Pakistan and India, including the core issue of Jammu and Kashmir through a sustained dialogue process and in accordance with the relevant UN Security Council resolutions. In this regard, Pakistan expresses its deep appreciation for Turkey’s principled stance on the issue as well as its offer for mediation,” it stated.

In his speech to the joint sitting of the Pakistani parliament, Erdogan had asserted that sufferings of Kashmiris had been aggravated by India’s steps taken in recent months, referring to the removal of constitutional autonomy and restrictions on communications. “This approach, which aggravates the current situation and revokes the freedom and … rights of the Kashmiri people, does not bring any benefit to anyone,” said the Turkish president.

He also announced that Turkey would support Pakistan at the Financial Action Task Force (FATF) to help it avoid further strictures on terror financing. The plenary meeting of the money laundering watchdog FATF will be held soon which will decide if Pakistan has overseen enough reforms to avoid being ‘blacklisted’.

“We will continue to stand by Pakistan in the future, as we did in the past. In this context, I would like to emphasise that we will support Pakistan that may face political pressure at the Financial Action Task Force (FATF) meetings which is a current issue. The brotherhood law in Islam requires sharing agitations and being involved in them besides supporting the fellow believers. Short-term interests, daily reckonings cannot hinder our everlasting and eternal brotherhood,” he said.

He asserted that Turkey “endeavours to eliminate the differences between the Ummah, to find a solution to the disputes and to claim our righteous causes, especially Palestine, Cyprus and Kashmir”.

‘India rejects all references to J&K’

In a statement issued on Saturday morning, the spokesperson of the Ministry of External Affairs, Raveesh Kumar dismissed the remarks on Kashmir made during the visit of the Turkish president to Islamabad.

“India rejects all references to Jammu & Kashmir, which is an integral and inalienable part of India. We call upon the Turkish leadership to not interfere in India’s internal affairs and develop proper understanding of the facts, including the grave threat posed by terrorism emanating from Pakistan to India and the region.” 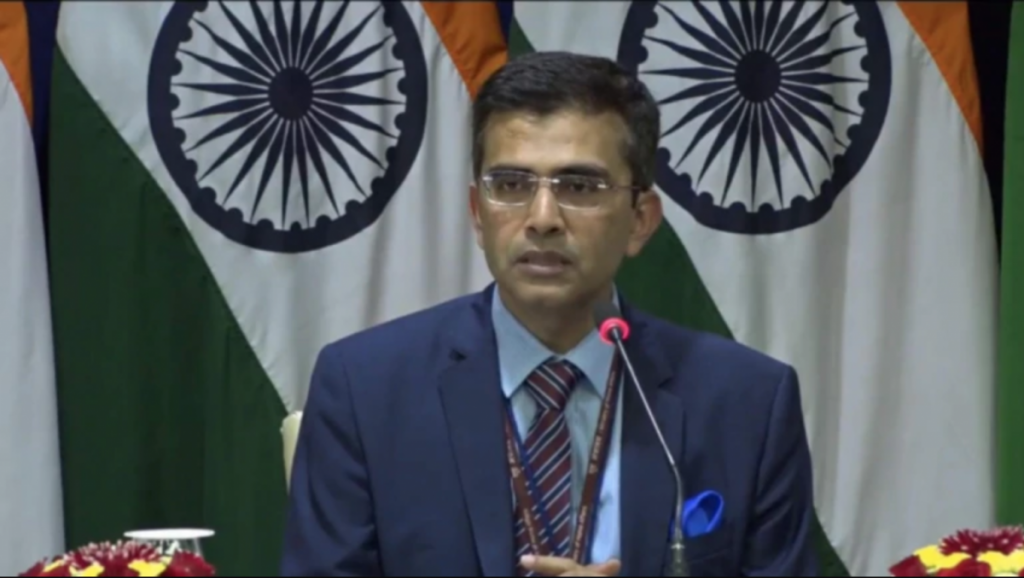 This is not the first time that the Turkish president has commented on Kashmir – followed by a response from India.

In October last year, Kumar had called upon Turkey to have a proper understanding of the situation before making further comments.

“India and Turkey are friendly countries. We, therefore, deeply regret that since August 6, there have been repeated statements by the Turkish government on a matter completely internal to India. These statements are factually incorrect, biased and unwarranted,” Kumar said.

Along with being a close ally of Pakistan, Erdogan has also been competing to have a larger role in the Islamic world against established leaders like Saudi Arabia. With Riyadh having taken a hands-off approach to Kashmir so far, Erdogan, along with Malaysian Prime Minister Mahathir Mohammed have been most vocal in raising Kashmir at various forums, including United Nations. However, unlike Malaysia, India has so far, not taken any punitive steps against Turkey.