Beyond the Hurrahs, Eight Takeaways from the ICJ Ruling on Kulbhushan Jadhav

The world court has given us a breather, time out for the leadership of India and Pakistan to find a way out of this maze – one where the life of a human being does not hang in the balance.

A view of the full bench of the International Court of Justice as the verdict is delivered in the Kulbhushan Jadhav case at The Hague. Photo: ICJ

Forget the cries of victory or the laments of defeat, the real winner to emerge from the International Court of Justice’s decision reiterating Pakistan’s obligation to provide India consular access to Kulbhushan Jadhav is the very idea of international law. Whatever the cynics may say, the treaties and norms that nations have painstakingly built over the past hundred years do sometimes end up making a difference in the conduct of relations between states and, ultimately, in the fate of an individual.

At stake is the life of Jadhav, a man Pakistan’s military courts have convicted of espionage and placed on death row, but whom India has described as a retired naval officer-turned-businessman.

As a result of Wednesday’s verdict in The Hague, the death warrant against Jadhav has been stayed and Pakistan has been asked to review his conviction and sentence. That’s great news, but it’s as far as international law can really go. How long the stay lasts and what sort of outcome emerges from the review process will likely be determined by political considerations – both within Pakistan and at the bilateral level with India.

Jadhav’s arrest was announced by Pakistan on March 29, 2016 and a video confession he purportedly made was broadcast that day in which he is heard saying that he was an Indian spy and had carried out terrorist acts on Pakistani soil.

In my analysis the same day, I raised 10 questions about his arrest and confession, beginning with the issue of Jadhav’s right to consular access under Article 36 of the Vienna Convention on Consular Relations (VCCR) of 1963. One year later, when Jadhav was sentenced to death, Pakistan’s obligations under the VCCR became the central point on which India moved the ICJ.

Both countries vigorously argued their case but ultimately the ICJ found merit in India’s principal claim. It rejected Pakistan’s contention that Article 36 of the VCCR did not apply to persons accused of espionage. It also rejected the argument that a 2008 India-Pakistan bilateral agreement on consular access allowed it to deny consular access on ‘security’ grounds. Instead, the court concluded that Pakistan had indeed violated international law when it deprived India of the right to communicate with and have access to Jadhav, to visit him in detention and to arrange for his legal representation before he was placed on trial for the crimes of espionage and terrorism by a Pakistani military court.

In the operative part of its judgment in which all 15 permanent judges concurred (the sole dissent was from the Pakistani ad hoc judge), the ICJ said that Pakistan was obliged to remedy its breach of the VCCR. It then ruled that the way it must do this is by:

(1) immediately informing Jadhav of his rights and providing Indian consular officers access to him in accordance with Article 36 of the VCCR; and

(2) undertaking an effective review and reconsideration of the conviction and sentence of Jadhav.

Although the ICJ left it to Pakistan to use the “means of its own choosing” in conducting this review, it did specify that the review must fully take into account the effect of the violation of international law committed by Pakistan in denying Jadhav consular access in the first place.

What this means, essentially, is that Jadhav’s so-called confessional statement – which Pakistan used as the basis for his conviction, and which India said was coerced subsequent to Jadhav being denied his rights to consular and legal assistance from his own government – should be treated as the fruit of the poisonous tree and presumably discarded as evidence.

Unsurprisingly, the ICJ did not accept India’s Hail Mary plea that Jadhav be set free. In refusing to order his release, the ICJ cited its earlier ruling in the Avena case where Mexico had taken the United States to the world court for having denied Mexican citizens on death row consular access:

“The court reiterates that it is not the conviction and sentence of Mr. Jadhav which are to be regarded as a violation of Article 36 of the Vienna Convention. The Court also recalls [from Avena]  that “[i]t is not to be presumed . . . that partial or total annulment of conviction or sentence provides the necessary and sole remedy” in cases of violations of Article 36 of the Vienna Convention.”

On these grounds, it refused to uphold India’s submission that Jadhav be released and given safe passage back home. However, discarding his confession – if that is what Pakistan is eventually compelled to do – may perhaps amount to the same thing. Provided Pakistan honestly and fairly conducts the review process. 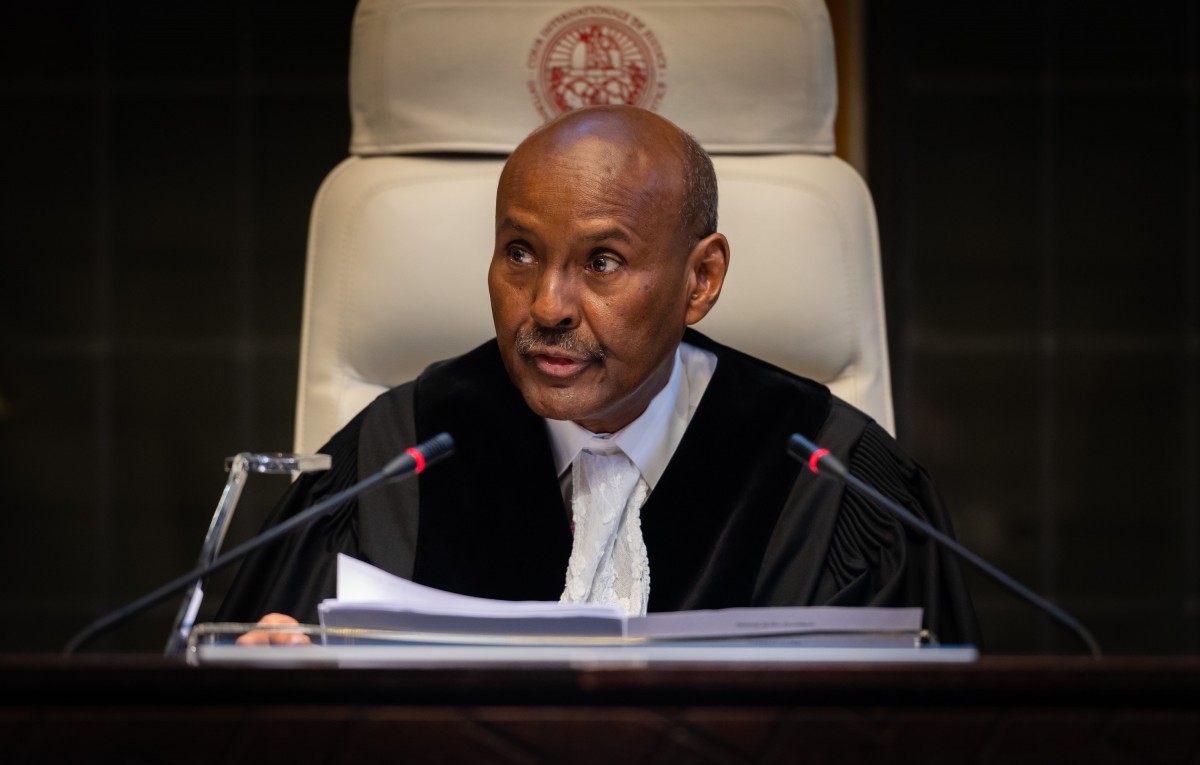 Judge Abdulqawi Ahmed Yusuf, president of the International Court of Justice, reads out the court’s verdict in the Kulbhushan Jadhav case at The Hague on Wednesday. Photo: ICJ

Since the ICJ left the choice of the mechanism for review to Pakistan, the latter may still decide to confine the process to its military courts. But if the country’s civilian courts get into the act, and display some independent mindedness, then it is possible the review process may be a substantial one and provide some relief.

So where do we go from here? Pakistan is still digesting the implications of the ICJ ruling and it is not clear what its official plan of action will be. However, based on the ICJ ruling, the following eight points are self-evident.

First, though the ICJ did not annul the sentence or order his release, as India had asked, the stay on Jadhav’s death sentence will continue.

Second, Pakistan is now obliged to grant Indian diplomats in Islamabad access to Jadhav. If this is denied, India can promptly go back to the ICJ.

Third, consular access means India can speak to Jadhav in confidence and learn first-hand the circumstances of his arrest, his treatment in captivity, and the story behind his confessional videos. If details about his capture and treatment emerge, they may prove embarrassing to Pakistan, which is presumably one of the reasons why it did not want to give India consular access in the first place.

Fourth, India can also now provide Jadhav proper legal assistance. This would not only have a bearing on the ‘review’ but might also give India a ringside view of a process that Pakistan might otherwise want to conduct in camera.

Fifth, Pakistan is obliged to review and reconsider the conviction and sentence, bearing in mind the adverse consequences that denial of consular access has had for Jadhav. This puts a question mark on the admissibility of the confession that was the centrepiece of Pakistan’s case against him.

Sixth, it is entirely up to Pakistan to decide the manner in which the review and reconsideration will take place. For example, it is at liberty to say its military panels have reviewed the matter and decided there will be no change in the conviction and sentence. Or it may put Jadhav on trial before a military court again and find him guilty once more.

Seventh, we have a temporary reprieve for Jadhav but if the Pakistani military decides to brazen things out and stick to its guns, India may have few options. It could perhaps go back to the ICJ* and say Pakistan did not implement its ruling in good faith but if GHQ decides to be bloody minded, there is little that anyone or any institution, even the world court, can do.

Eighth, now that law has done its thing, it is time for diplomacy to play its role. When all is said and done, the Jadhav case is the product of the central position that terrorism and allegations of state sponsorship of terror and separatism have come to occupy in India-Pakistan relations.

New Delhi’s case against Islamabad may have strong support worldwide but the Pakistani military has made it clear that it regards Jadhav and especially his “confession” as evidence that it too is a victim of “cross-border terrorism”. But having ‘levelled’ the playing field in this manner, what future moves is the military brass contemplating vis-a-vis India? Carrying out the death sentence on Jadhav means condemning Pakistan and India to a decade or more of open hostility. But letting him go will weaken its hold as self-appointed custodian of Pakistan’s ‘security’.

Perhaps what the ICJ and international law have given us today, then, is a breather – a time out for the leadership of both India and Pakistan to find a way out of this maze. One where the life of a human being does not hang in the balance. If the Modi government can find a way to move the relationship forward, an amicable resolution to the Jadhav problem could also be within grasp.

* Shashank Kumar, an international lawyer, former law clerk at the ICJ and a contributor to The Wire has pointed out to me on Facebook:  “India cannot go back to the ICJ if no consular access is provided post judgment, or if Pakistan’s review and reconsideration are not “effective”. The ICJ, unlike some other international courts like at the WTO, does not have a procedure in cases of non-implementation. There are very limited circumstances under which a court will review its judgment (new facts), or will agree to “interpret” aspects of its original judgment. Besides these limited avenues, going back to the ICJ is sadly not an option. When Texas fixed an execution date for [Jose Ernesto] Medellin, who was a subject in the Avena Case, Mexico went back to the ICJ asking it to interpret its original judgment and declare that the obligation to review and reconsider therein was an “obligation of result” and not an “obligation of conduct”. The US actually agreed that it was an obligation of result, the court declined to interpret its original judgment, and Medellin was executed.