In his media statement, Ibrahim Solih asserted that India has always been a “reliable ally to the Maldives, through thick and thin”. 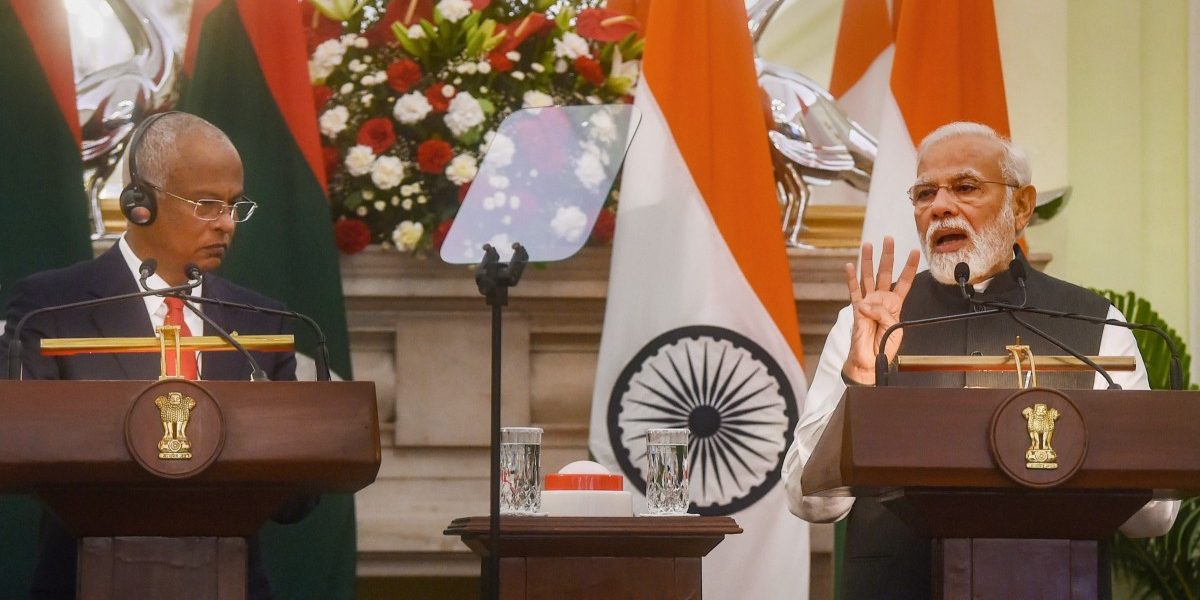 New Delhi: Maldives President Ibrahim Solih on Tuesday reaffirmed the island nation’s “India-first” policy during his visit to New Delhi, with both countries reassuring each other that they continued to remain mindful of the other’s security concerns.

On his third visit to India as president, Solih had discussions with Indian Prime Minister Narendra Modi, who also hosted a luncheon in his honour. He was also the first foreign leader to be received by the new Indian president, Droupadi Murmu.

In his media statement, Solih asserted that India has always been a “reliable ally to the Maldives, through thick and thin”.

“India is almost always, our first responder in times of crises, and is amongst the loudest supporters in times of good fortune. Which is why, my Administration’s ‘India First’ policy is so crucial to ensure that our longstanding ties continue to weather the test of time. It is during my Administration thus far, that we have reached the pinnacle of our diplomatic and economic relations,” he said.

Solih’s remarks come in the background of the Maldivian opposition running an ‘India Out’ campaign, claiming that Indian military personnel had been posted in the Indian Ocean nation. The Maldives government has repeatedly denied the allegation and criminalised the opposition’s campaign. President Droupadi Murmu with President of the Republic of Maldives Ibrahim Mohamed during their meeting at Rashtrapati Bhavan, in Delhi. Photo: PTI

At a media briefing, India’s high commissioner to the Maldives Munu Mahawar said that the ‘India Out’ campaign was being “run on misinformation, false propaganda, and they do not reflect the views of the people of Maldives”.

In June, the official International Day of Yoga event was disrupted and vandalised by protestors claiming the practice was against Islam.

Mahawar pointed out that the event had been jointly organised by the Indian high commission and the Maldives government.

“In Maldives, the international day of yoga has been celebrated every year since 2015, and the Maldives had co-sponsored the resolution that recognised the day. The government of Maldives and the government and political parties have condemned what happened…Government of Maldives has taken action, and they have committed at the highest level that those responsible will be brought before the law,” said the senior Indian diplomat.

In answer to the question of whether the ruling party infighting and ‘India Out’ campaign were discussed, he replied, “Well, I said, all the visit and the discussions focused on bilateral, regional and international issues.”

On the defence front, there was a reiteration of the need to strengthen the relationship.

The joint statement asserted that the two sides reiterated that they would not allow their territory to be used against the other. “This partnership is a force for stability in the Indian Ocean Region. Recognising that the security of India and the Maldives are inter-linked, the two leaders reiterated their assurance to be mindful of each other’s concerns on the security and stability of the region; and to not allow their respective territories to be used for any activity inimical to the other.”

India announced the supply of a second Landing Craft Assault (LCA) to the Maldives National Defence Force (MNDF) and a replacement for an earlier provided ship. Besides, India is also gifting 24 utility vehicles to the MNDF.

The Indian prime minister also announced a new line of credit of $100 million for the neighbouring country to complete development projects in a time-bound manner.

“We have also decided to provide an additional line of credit of USD 100 million so that all projects can be completed in a time-bound manner,” he added.

The prime minister said the threat of trans-national crime, terrorism and drug trafficking is serious in the Indian Ocean and close India-Maldives ties were vital for peace in the entire region.

He added that India has been and will continue to be the first responder to any need or crisis in the Maldives.

The six pacts inked between the two sides will facilitate cooperation in capacity building, cyber security, housing, disaster management and infrastructure development in the Maldives.

“In the last few years, there has been renewed vigour in the friendly ties between India and Maldives. Our closeness has increased,” Modi said.

He said despite the challenges posed by the COVID-19 pandemic, the cooperation between the two countries is taking the form of a broad partnership.

In his comments, Solih said both sides reiterated their firm commitment to deal with the threat of terrorism.

“Maldives will remain a true friend of India…Our relations with India will always be of highest priority,” he said.