How Will Modi Deal With His 'Great Friend' Trump as US Goes to Polls?

There is a clear political method in the US president's madness. 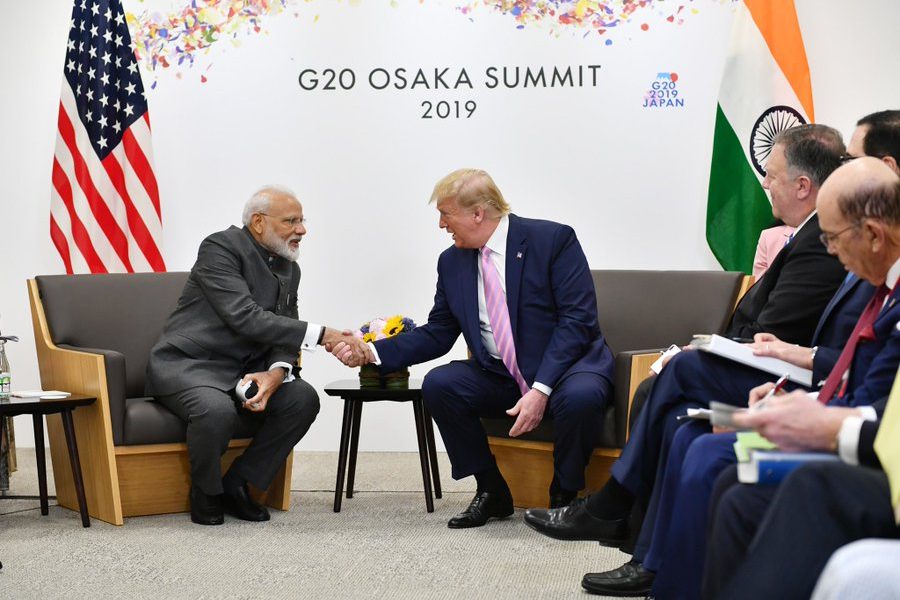 There seems a deliberate churlishness in the way Donald Trump conducts his diplomacy, if you can call it that.

Before reaching Osaka for the G20 summit, Trump tweeted a semi-threatening message saying the higher retaliatory tariffs India recently imposed on 28 items of import from the US were unacceptable and he expected them to be withdrawn. In traditional diplomacy, this should have been conveyed privately to the Indian prime minister, but then Trump must inject his trade diplomacy with a public sense of drama.

After reaching Osaka, before his one-on-one with Modi on the sidelines of the G20, the US president said he and the Indian prime minister “have become great friends and the two countries have never been closer”.

Trump’s two contrasting statements vis-à-vis India show that he is prone to playing bad cop and good cop at the same time. This waxing and waning seems to have become the hallmark of his style of diplomacy. Nevertheless, India must be cautious in its response to the multiple levels on which Trump is trying to push the envelope with regard to various trade and non-trade issues.

The first thing to remember is Trump is seeking re-election as US president next year, and there is a clear political method in his madness. The sabre-rattling directed at China, Iran, Russia and India are part of a larger design. Indian diplomats had been a bit puzzled as to why Trump was targeting India so intensely on trade and other issues, even as the US was engaged in a full-scale trade war with China. After all, India was not such a big player in global trade anyway.

It is clear that trade issues are largely a proxy for the “technology cold war” the US has launched against China. In Osaka, Modi listed the 5G telecom network divide between the US and China as one of the contentious issues in the India-US bilateral relationship, besides Iran and S-400 missile defence purchases from Russia.

It appears the US is giving India an ‘either-us-or-them’ option when it comes to trading with Iran (both oil and connectivity via Chabahar port), high-tech defence purchases from Russia and use of Chinese 5G technology to drive India’s rapidly growing digital economy. In fact, it seems the Trump administration is moving towards a position where it wants India to become part of US’s globally centralised cyber security/governance umbrella as opposed to a more decentralised system preferred by Russia and China.

The US’s insistence that India ban Chinese companies’ 5G technology and its aversion to India’s data localisation policy are inherently linked to Trump’s desire that India become part of the US cyber umbrella without asking any questions. The implicit understanding is that once India joins the US cyber camp fully, all other benefits like intelligence sharing on terrorism etc. will flow naturally.

So it is possible Trump may want to go into the US elections next year having achieved the cyber/tech isolation of China, which may be seen as an initial victory in the ongoing technology cold war. He wants Modi’s support for this. A billion-plus population of a fast-growing digital economy refusing to adopt Chinese 5G technology can be trumpeted as a big victory. Of course, Trump also wants India to abandon Russia as a strategic partner in high-tech defence cooperation.

India has to be alert over the next year as Trump may up the ante further. For now, external affairs minister S. Jaishankar has told US secretary of state Mike Pompeo in no uncertain terms that India will pursue its issue-based strategic ties with other countries based on its own national interest. It is evident India cannot overnight abandon Russia in defence cooperation.

Also read: Decisions on US-India Issues Will Not Be Taken by the Pompeos and the Jaishankars

Also, India possibly cannot overnight abandon the largest Chinese telecom hardware company in the world Huawei, which has been doing business in India for over 25 years. A lot of BSNL’s telecom networks across India are based on Huawei technology. Three-fourths of all private telecom services companies also use Huawei network equipment because they are much cheaper.

The United Kingdom too went through this debate and has struck a compromise whereby all military and sensitive government 5G communications network will be non-Chinese, while the bulk of the commercial networks can be accessed by Huawei. British telecom is already in the process of laying networks with Chinese technology in six cities in Britain. There could be lessons for India from the experience of UK, the US’s closest NATO ally.

There will be immense pressure on Modi on all these counts as the US goes into the presidential elections next year. The US threat of a drastic cut in the H1-B visa quota for India if it does not become a camp follower of the US in the ongoing technology cold war must be taken seriously.

Trump can be a “great friend” and indulge in ruthless transactional diplomacy at the same time, especially in a period of intense political messaging to his domestic constituency.

In this context, Trump’s declaration that he and Modi have become “great friends” is a perception which might carry a lot of risk for the Indian prime minister, as he will have to manage expectations back home. Trump’s friendship can turn into a burden when national interests of both countries clash. And there is every sign of that happening.