While the whole world realised early on that the US under Trump was not a trustworthy partner, Modi decided to push India into an even tighter embrace. 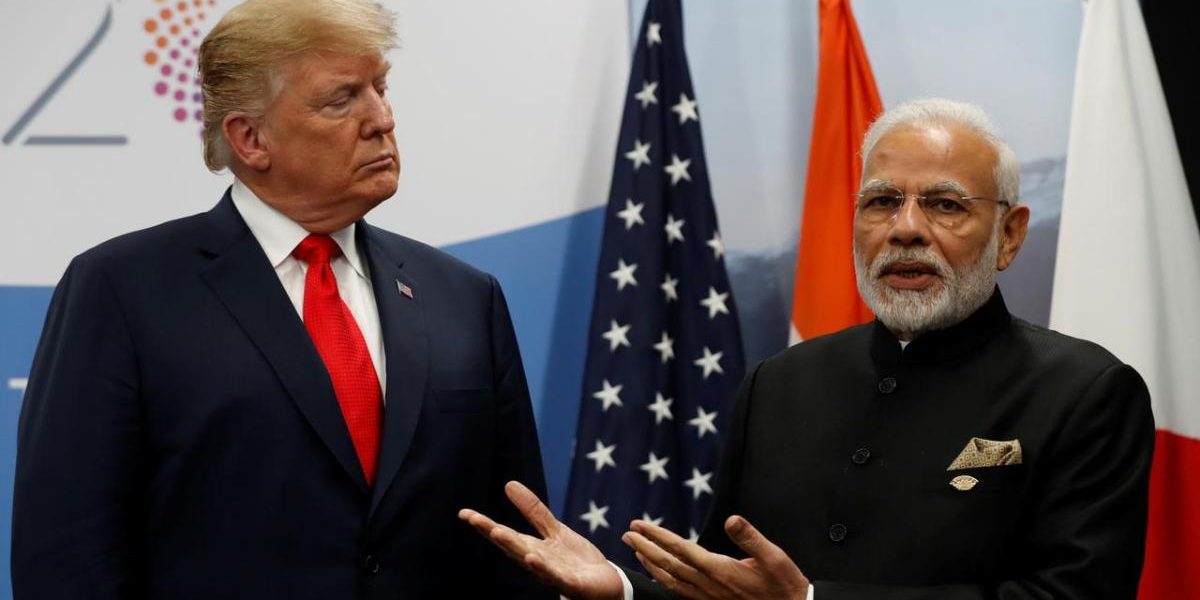 Their romance – once the talk of the world – had begun showing some signs of a cooling off even earlier but the relationship between US President Donald Trump and Indian Prime Minister Narendra Modi has now surely reached a decisive turn.

Trump’s statement on Monday that Modi sought his help as a mediator to help resolve the Kashmir issue with Pakistan is the nearest thing in the Indian foreign policy playbook to a stab in the back. It doesn’t matter if Trump was speaking the truth, making things up or just plain confused. That this statement was made in the course of a joint press conference with Pakistani Prime Minister Imran Khan makes the wound even more difficult to handle.

The official Indian denial came swiftly and predictably, and will stem some of the immediate political damage that the Bharatiya Janata Party would have otherwise had to confront domestically. But there is no quick cure for the agony Modi and his advisers must surely now feel for having been so trusting of Trump – bringing Indian policies from Iran and Venezuela to Asia and the maritime domain swiftly in line with Washington’s demarches.

Trump never hid his ‘America First’ agenda. What was surprising was the speed with which those who claimed to believe in ‘India First’ so quickly jumped to attention – and their naïve belief that Indian interests would somehow be served in the process.

Let us quickly recap the events of the past few hours and then analyse what this tells us about the India-US relationship under Modi and where it might be headed.

In Washington, Trump made an astonishing claim about his last meeting with Modi in Osaka, at the sidelines of the G-20 meeting earlier this month:

“So I was with Prime Minister Modi two weeks ago and we talked about this subject. And he actually said, would you actually like to be a mediator or arbitrator? I said, where? He said Kashmir. Because this has been going on for many, many years. I was surprised at how long it has been going on.”

As Imran Khan chipped in, urging him to “mediate and resolve the issue”, Trump said, “I will speak to [Modi] and we will see what we can do.”

The Ministry of External Affairs has denied Trump’s key claim – “No such request has been made by PM Narendra Modi to [the] US president”, its spokesperson tweeted – but this leaves us with only four possibilities. First, that Trump is deliberately lying. Second, that he is a fantasist who plucked the supposed details of his conversation with Modi out of thin air. Third, that there was some pretty radical miscommunication between Trump and Modi in Osaka. And fourth, that the Indian side is not telling the truth.

Of these options, I am prepared to rule out the fourth because opposition to big power mediation is not just an article of faith for the Indian establishment but a practical necessity of realpolitik too. No matter how much they rail against the ‘Lutyens’ consensus’, it is hard to imagine Modi and his advisers deluding themselves into believing any good could come out of abandoning a longstanding position and involving Trump in Kashmir.

That still leaves three options. ‘Miscommunication’ is the most benign but in turn throws a question mark over the effectiveness and even wisdom of Modi’s hugs and pull asides at world forums.

The US has now put out a short statement by assistant secretary of state Alice Wells that “While Kashmir is a bilateral issue for both parties to discuss, the Trump administration welcomes Pakistan and India sitting down and the United States stands ready to assist.”

With this, presumably, both the State Department and MEA hope to contain the fallout Trump’s remarks have led to but things are not so simple. The entire episode has highlighted a fundamental problem for the Indian side: While the whole world realised early on that the US under Trump was not a trustworthy partner, Modi has led India into an even tighter embrace with Washington. And there is no telling what the eventual price will be.

If a world leader whom Modi has so assiduously appeased can be so indifferent to India’s well-known position on Kashmir, what does that tell us about Modi’s sense of judgment?

To be fair, Modi began the process of doubling down on the strategic partnership almost as soon as he became prime minister, when Barack Obama was US president. Signing the Logistics Exchange Memorandum of Agreement (LEMOA) in August 2016 meant he was allowing India to be used as a springboard for US military power in the region. Those were the heady days of the ‘Asia Pivot’ when the US’s Cold War with China began to first take shape and Modi and his advisors naively thought India could buy security by bandwagoning with the US.

In the last two-and-a-half years, as Washington’s closest allies have grown wary of the way the US administration has upended key US policies on Iran, climate change and trade, Modi and Japan’s Shinzo Abe are perhaps the only major world leaders still willing to gamble on Trump. Even so, Japan has actively sought to de-escalate tensions between the US and Iran while India is content to watch the slow slide to conflict from the sidelines.

Undeterred by mounting evidence of the US under Trump playing a destabilising role in West Asia, Modi has gone ahead and signed the Communications Compatibility and Security Agreement (COMCASA), further committing the Indian military to a closer relationship with the Pentagon.

The fundamental mistake Modi and his advisers have made is to assume personal chemistry can somehow generate positive results for India even when the underlying factors indicate otherwise. Worse, the pursuit of goals has also often been wrong-headed.

In Modi 1.0, S. Jaishankar, who was then foreign secretary, engineered a disastrous one-on-one meeting between Modi and Xi Jinping of China in the hope that Beijing would back India’s bid to become a member of the Nuclear Suppliers Group. Despite the fact that quick NSG membership would have been of little use to India at that time, it was made a national priority, presumably for the purpose of domestic political signalling. The end result: years of nuclear diplomacy aimed at establishing India as a responsible player and Pakistan as an outlier got undone as Beijing used the opening to push for parity between Delhi and Islamabad on the question of NSG membership.

The speedy listing of Masood Azhar as a terrorist on a UN list was a similar chimera for which Modi 1.0 expended a lot of diplomatic capital. In the end, Trump delivered this meaningless accomplishment for Modi but clearly believed he had thus acquired leeway to push the envelope on “mediation”. The first inkling of this came during the election campaign itself, when Trump spoke about the imminent release of Abhinandan Varthaman – the Indian Air Force pilot shot down over Pakistan.

The second mistake the Modi government is making is in not appreciating how all the other parts of the Trump strategy that it has gone along with – the pressure on Iran, heightened tension with Russia and an all-out Cold War with China – have ended up actually strengthening Pakistan’s hands in the region. Trump, who was singing a different tune about Pakistan two years ago, now realises his plans for Iran and Afghanistan require stability on the Washington-Islamabad axis. This is precisely the context of Imran Khan’s visit to the White House, and Trump’s remarks on mediation with India are clearly a product of this process.

When the dust from the present controversy settles, Modi and his advisers need to go back to the drawing board. It was a fundamental mistake to put so many eggs in the US basket and neglect key relationships with Moscow, Beijing and Tehran. Above all, the absence of a coherent, rational policy towards Pakistan has created a vacuum that is not in India’s interest. Modi is fortunate to have been served a foreign policy wake-up call so early in his second tenure. He must make the most of it.