Trump is in India for less than 36 hours but has a packed scheduled to travel to three cities – Ahmedabad, Agra and New Delhi.

New Delhi: US President Donald Trump, accompanied by his wife, daughter and son-in-law, arrived for his first visit to India, with Air Force One touching down at Ahmedabad, where he will take part in a roadshow and address a public rally.

The presidential plane landed at around 11:50 am at the Ahmedabad international airport. He was greeted at the foot of the steps by Indian Prime Minister Narendra Modi

A few hours before he landed in India, the official Twitter account of Trump also tweeted in Hindi.

Trump is in India for less than 36 hours but has a packed scheduled to travel to three cities – Ahmedabad, Agra and New Delhi.

The first day of his visit is all about the public spectacle, with the Indian government hoping to satiate the US President’s appreciation for big crowds. Even as he left for India, he said that “millions and millions” of people will be taking part in the roadshow and attend the ‘Namaste Trump’ rally at the Motera stadium.

Earlier, he had claimed that the Indian PM had promised him numbers between “six and 10 million”. Indian officials indicated that there may have been “some confusion between lakhs and millions”. The total population of Ahmedabad is around eight million.

On the way to the stadium, Trump and First Lady Melania spent around 15 minutes at the Sabarmati Ashram, the river-side commune set up by Mahatma Gandhi.

They were seen in conversation with PM Modi while spinning a charkha. The Ashram’s trustee Kartikeya Sarabhai said that gifts such as a biography of Gandhi, a charkha and a marble statue of the ‘three monkeys’ was gifted to the US president.

Sabarmati Ashram Trustee, Kartikeya Sarabhai on US President’s visit to the Ashram: Several gifts, including Mahatama Gandhi ji’s biography, a Charkha (spinning wheel) and a marble statue of 3 monkeys symbolising ‘See No Evil, Speak No Evil & Hear No Evil’ have been gifted to him https://t.co/QGwqdltAGU

When the US president’s cavalcade arrived at the Motera stadium, PM Modi was joined by Union home minister Amit Shah, CM Vijay Rupnai and governor Acharya Devvrat to welcome him.

The Indian side had also underlined that this visit “will be the largest and biggest visit (by a foreign leader) that has ever happened, anywhere in the world”.

Modi had invited President Trump at their first meeting in June 2017, when he had apparently committed to visiting India in the Indian PM’s first term. India had also invited him to be the chief guest for the Republic Day in 2019, but it didn’t work out due to scheduling reasons.

Also Read: Has Modi Learnt to Play Trump Better? A Look at Possible Deliverables Beyond Motera

Trump will be the seventh US President to visit India since Independence. The first was Dwight Eisenhower in 1959, followed by Richard Nixon and Jimmy Carter, almost a decade apart.

After a gap of 22 years, Bill Clinton visited New Delhi in 2000, followed by George Bush in 2006. Barack Obama was the only US President to travel to India twice, and he was hosted by two different prime ministers – Manmohan Singh in 2010 and Modi in 2015.

The Indian government is highlighting that the speciality of this presidential sojourn is not only the public spectacle, but also that it will be a stand-alone state visit to India.

On Tuesday, Trump will get a ceremonial reception at the Rashtrapati Bhawan and will then go to lay a wreath at Mahatma Gandhi’s memorial.

He will then hold formal discussions with his host at the Hyderabad House, followed by the signing of agreements. This will be President Trump’s fifth meeting with Modi in the past eight months. 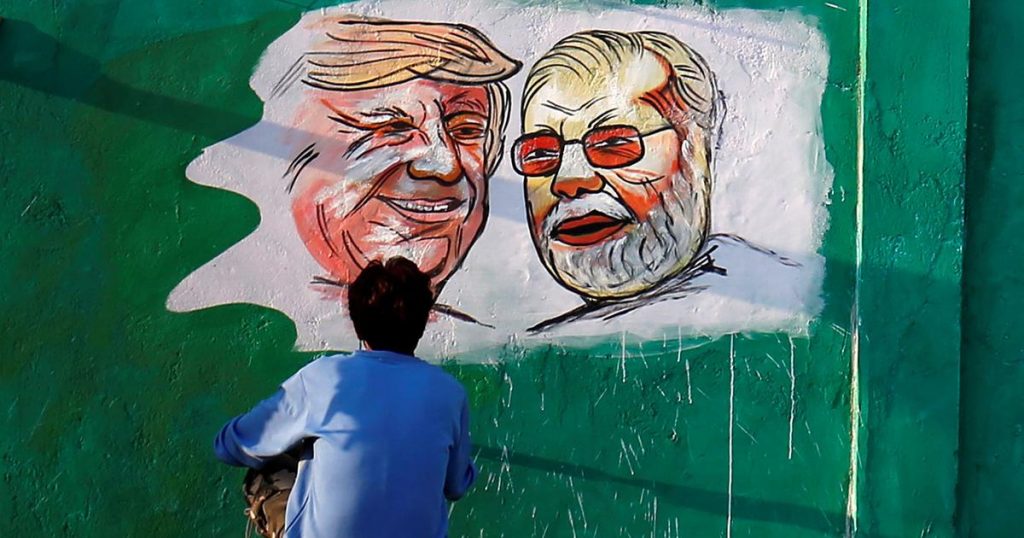 A man works on a painting of Donald Trump and Narendra Modi in Ahmedabad. Photo: Amit Dave/Reuters

So far, indications suggest around half a dozen agreements may be signed, ranging from defence to nuclear and homeland security. In the absence of a substantive trade deal, an agreement on trade facilitation may be inked in the presence of the two leaders. However, while a big trade deal was not in the offing, sources indicated that there may still be efforts to obtain a token trade access agreement at the last minute.

The Indian PM will host Trump for lunch on Tuesday, following which the US president travels to the US embassy for a meeting with business leaders. On Tuesday evening, the Rashtrapati Bhawan will be the venue for a state banquet in his honour, following which the presidential entourage will be wheels up at 10 pm.