While India has been assertive in protecting interests it considers vital to its security posture in the region, New Delhi remain cagey when it comes to drawing lines on a map. 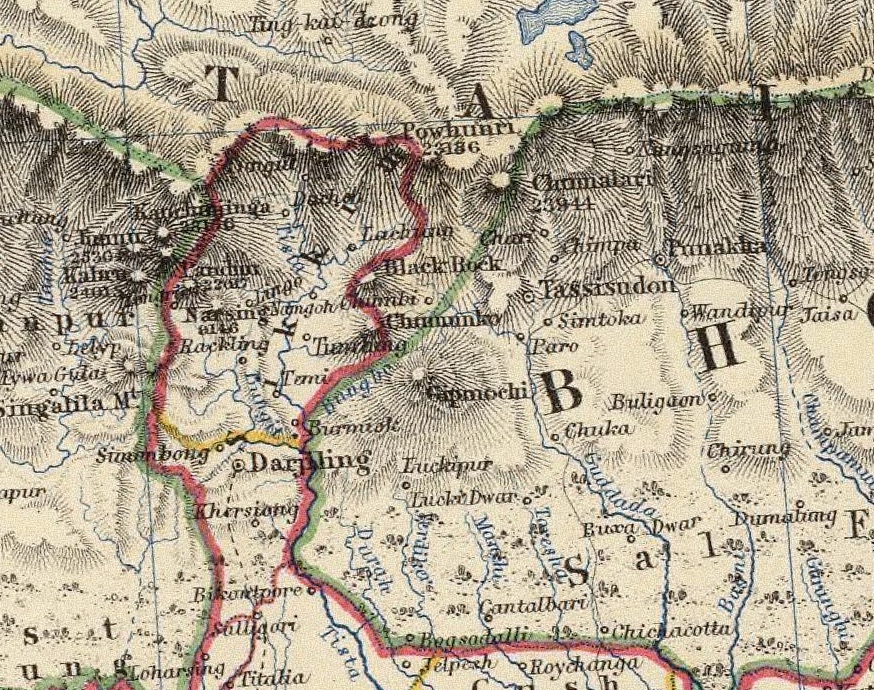 To start at the very beginning: the Sikkim-Tibet border was defined in 1890 through the Anglo-Chinese Convention that was signed in Kolkata on March 17, 1890.

As is evident, Bhutan played no role in this, nor did Sikkim or Tibet; the agreement was between two empires – the British and the Qing. The Tibetans refused to implement the convention and for this they were punished when the British stormed Lhasa and later signed a convention with the Chinese in 1906 and 1910 recognising the authority (suzerainty, they said) of China over Tibet in exchange for a number of rights.

In the recent exchanges between India and China, it would appear that while Beijing stands by the 1890 convention, India’s position is somewhat ambiguous.

In its sole formal statement of June 30, 2017, the Indian spokesman  said that there was an agreement between China and India in 2012 that “tri-junction boundary points between India, China and third countries will be finalised in consultation with the concerned countries.”

More important, he added that the 2012 understanding was merely a reconfirmation of their “mutual agreement on the ‘basis of alignment’.” Further discussions would have to take place to actually finalise the boundary. Parsing this, it suggests that while the two sides had agreed that the watershed, indeed, is the boundary, there is need for more work to actually finalise it as such.

An exasperated Chinese spokesman underscored this on July 3, when he complained: “As to the statement issued by India’s Ministry of External Affairs last Friday (i.e. June 30), we have noted that this statement completely left out the Convention Between Great Britain and China Relating to Sikkim and Tibet (1890), none other than which clearly defined the China-India boundary alignment in areas where the incident happened.”

Is India, then, interpreting the 1890 Convention unilaterally? If so, then it is a dangerous game. Something similar happened when the MEA in 1959 “interpreted” the McMahon Line which, as per treaty, terminated on the Bhutan border at 27°44′30″ N. But when Indian patrols went there, they found that this was not the highest ridge of the watershed – that was at Thag La ridge, some 4 kms north of where McMahon had drawn the line on the map. The Indian side decided on its own that Thag La ridge was the boundary, and the Indian Army was asked to throw the Chinese off that ridge in an ill-considered operation that triggered the disastrous war of 1962.

In Part I of the Henderson Brooks report on page 54, section 33 noted “DHOLA post was established NORTH of the McMAHON Line as shown in maps prior to October/November 1962 edition. It is believed the old edition was given to the Chinese by our External Affairs Ministry to indicate the McMAHON Line. It is learnt we tried to clarify the error in our maps, but the Chinese did not accept our contention.”

With regard to the issue on hand – the China-India-Bhutan tri-junction –  there certainly are differences. Both India and Bhutan put the tri-junction near Batang La (N 27°19′48″ & E 88°55′04″).  A record of the 68th session of the Bhutanese National Assembly in 1989 noted that the border would go from Batangla to Merugla to Sinchela along the ridge and then down to Amo Chhu river.

The problem is locating Gipmochi. An 1861 British map shows Gipmochi near the tri-junction but within Bhutan. (Map 1) Many old maps show the beginning of the border from a place called Gyemochen.

Indeed, the Bhutanese, themselves noted as the records of the 82nd session of their National Assembly reveals, that “the Chinese had been going from Gyemochen and Chela to Amo Chhu.”

So, the conclusion could well be that Gipmochi and Gyemochen are the same place. But that’s where we run into trouble. A modern data base, the one created and maintained by the US shows Gipmochi/Gyemochen to be at least 5 kms east of where the earlier Gipmochi/Gymochen are designated:

So clearly, what emerges is the difficulty of relying on an 1890 convention, based on possibly flawed surveys, that may have taken place in the early part of the 20th century in a mountainous and inhospitable region, for modern day boundaries. India and China have clearly indicated their intention of following the watershed principle for following their border. But to do it by relying on maps alone would be an imperfect process. It has to be done on the ground.

Then, of course, there is the matter of Bhutan. It was not party to the original convention and therefore cannot be held to its definition of what and where the border should be.

The first map of Bhutan was prepared with the help of India in 1961 and subsequently a Bhutanese agency mapped the country in the early 1980s, prior to engaging China and India on border talks. In the 68th session of the National Assembly, the king outlined the border which he said should go from Batangla to Merugla and Sinchela and then down to the Amo Chhu river. But according to the record, it was during the 14th round of border talks with China in 2000 that “the Bhutanese delegation had further extended the claim line in three areas in Doklam, Sinchulumba and Dramana” as per the decision of the council of ministers.

As for the Chinese, they are always cagey about putting their claims to paper. They follow the practical method of taking them over. So far all they have done is to provide a sketch map (Map 6). More extensive Chinese claims are visible through some maps in the internet, though their official provenance cannot be established. (Map 7)

Of course, Chinese official maps of Yadong – the Tibet Autonomous Region administrative unit that juts in between Sikkim and Bhutan – show the entire Doklam region as part of the country. (Map 8) 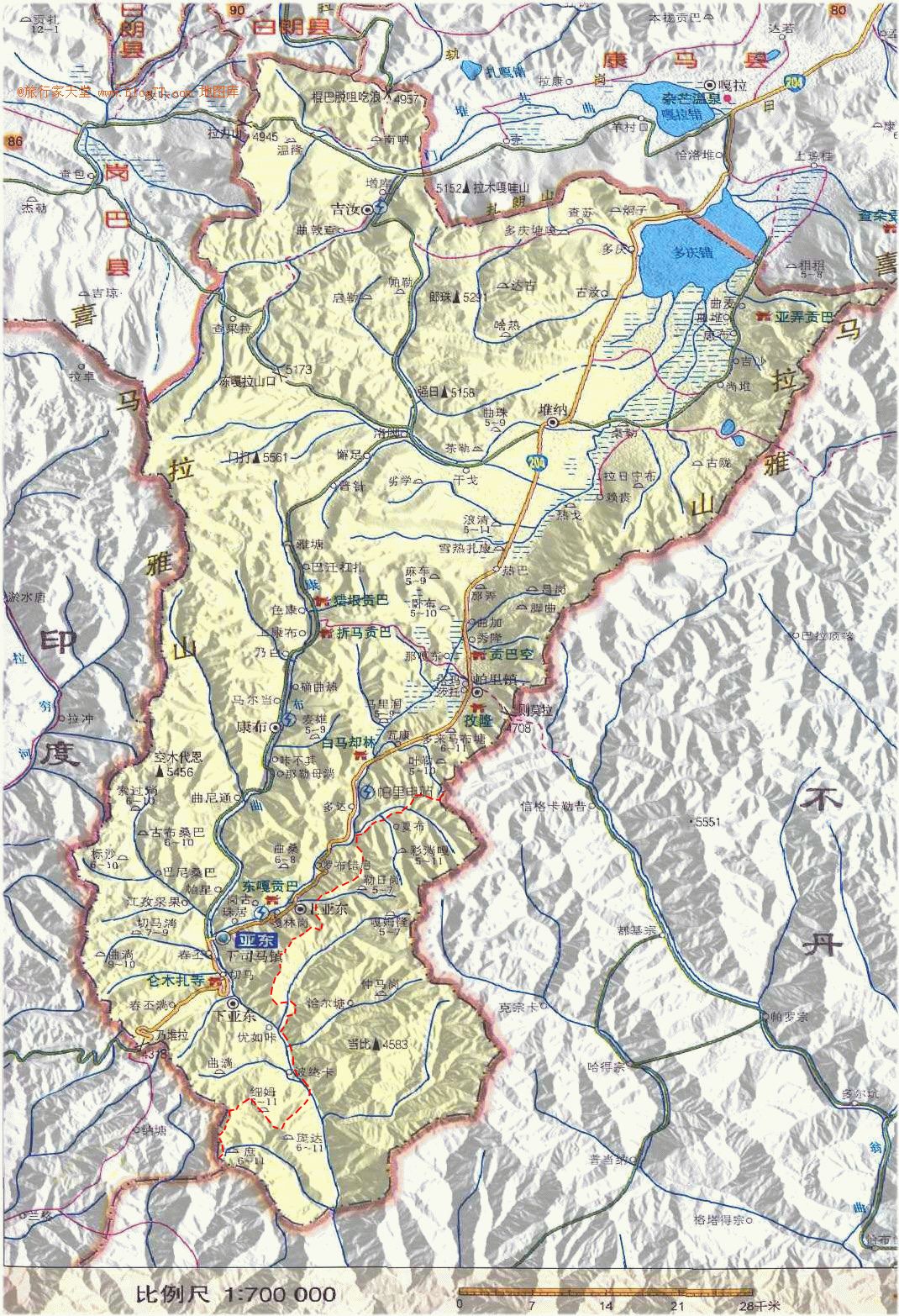 As the 82nd session of the Bhutan National Assembly records in June 2004 note: “During the 16th round of China-Bhutan boundary talks, it was decided to exchange 1:500,000 scale maps with the respective claim lines…. The Chinese delegation to the 17th Round of Border talks in Thimphu did not bring the map with claim lines.”

As for India, it is not claiming anything, so all the officials have done is to have come out with some sketch maps.(Maps 9 and 10)

On the ground, however, the Indians have moved in from Doka La to block the Chinese building a road to the Zomperi or Jampheri ridge which is clearly visible in Map 3 above (the US military map) below the wording “Gyemo Chen”. This ledge-like structure overlooking the low-lying hills of Bhutan, gives a clear overview to the Siliguri Corridor.

On June 29, Bhutan had put out its press release which was quite terse, noting that on June 16th, “the Chinese Army started constructing a motorable road from Dokola in the Doklam area towards the Bhutan Army camp at Zompelri. Boundary talks are ongoing between Bhutan and China and we have written agreements of 1988 and 1998 stating that the two sides agree to maintain… status quo on the boundary as before March 1959.”

Beyond the issue of maps and their interpretations, there is also the clear violation by the Chinese of their 1998 agreement with Bhutan not to disturb the status quo as of 1959. The Chinese have, in any case, violated this agreement to build a motorable track to a point below Doka La which is some 2 kms north of Gymochen.

While the Indians have been assertive in protecting interests that they consider vital to their security posture in the region, they remain cagey when it comes to the cartographic game. According to the Survey of India website, the map of Sikkim is still under preparation.

There is a bottom line here, though not a very comfortable one. Which is that international agreements are merely worth the paper they are written on, unless there is some interest amongst the parties concerned to uphold them. The Chinese are upset at India’s attitude towards the 1890 Convention. But they should introspect about their own attitude to the UNCLOS arbitration award on the South China Sea in 2016 which they have spurned, just because it did not suit their interests.