India has said that it is “deeply concerned at recent Chinese actions", particularly its decision to construct a road in Doklam tri-junction in Bhutan. 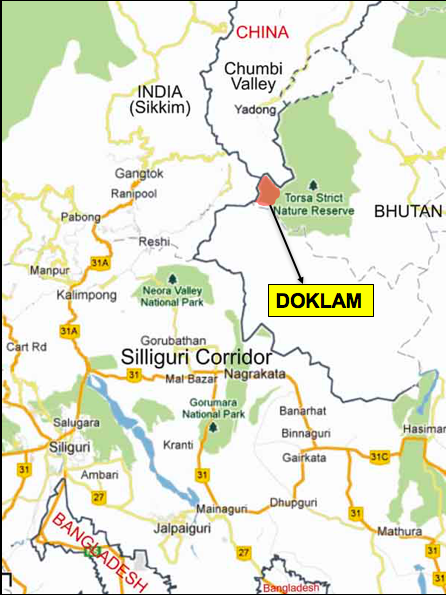 New Delhi: India has told China that construction of a road in the Doklam area of Bhutan would harm Indian security interests as well as violate a written understanding between Indian and Chinese Special Representatives on the border issue that the status of the boundary at any tri-junction would be resolved only with participation of the concerned third country.

Two weeks after the Chinese side started building a road in territory at the tri-junction that Thimphu and New Delhi both say is inside Bhutan but which Beijing insists is in China, the Indian government said on Friday that it remains “deeply concerned at the recent Chinese actions and has conveyed to the Chinese government that such construction would represent a significant change of status quo with serious security implications for India”.

The “security implications” are serious as Chinese construction activity usually precedes a strong claim on the territory. The Doklam area – which is part of Bhutan, but now claimed by China – will bring the Chinese even closer to the vulnerable ‘chicken neck’ Siliguri corridor that connects West Bengal and the rest of India to the north-eastern parts of the country.

For the Indian side, the construction of the road is also another way to force India’s hand on the tri-junction, by trying to bring it more down south.

“In this context, the Indian side has underlined that the two governments had in 2012 reached agreement that the tri-junction boundary points between India, China, and third countries will be finalised in consultation with the concerned countries. Any attempt, therefore to unilaterally determine tri-junction points is in violation of this understanding,” said the press note.

This understanding, that all three countries have to be part of any consultations to determine the tri-junction, was reached in 2012 by Shivshankar Menon and Dai Bunguo, who were at the time the Indian and Chinese Special Representatives respectively. This was a written understanding, which should not have led to any ambiguity.

Currently, there are bilateral mechanisms between the various countries on the border issues. Despite not having direct diplomatic relations, the 24th round of the China-Bhutan border talks was held in August 2016.

As Bhutan’s foreign ministry said on Wednesday, the latest incident began when a PLA contingent, armed with earth moving heavy equipment, entered the Doklam plateau. They drove to a clearing in the area, named ‘Turning Point’, which is apparently very close to the Indian post of Doko-La on the Sikkim-Bhutan border. Besides its proximity to Siliguri corridor, the Chinese also consider Doklam as strategically important, as it overlooks the Chumbi valley separating the Indian state of Sikkim from Bhutan. China has built roads on higher reaches of Bhutanese territory in the past, say official sources, but had not come down this far south before.

On spotting the Chinese PLA soldiers, Bhutanese soldiers at a border post called Chela on the Zompelri ridge, went to confront them and had a relatively long conversation to make them return to their previous positions. The message that was conveyed – which was also reiterated in Bhutan’s June 20 démarche – is that China was attempting to change the status quo on the border, which was in direct violation of the 1988 and 1998 agreements between the two countries. 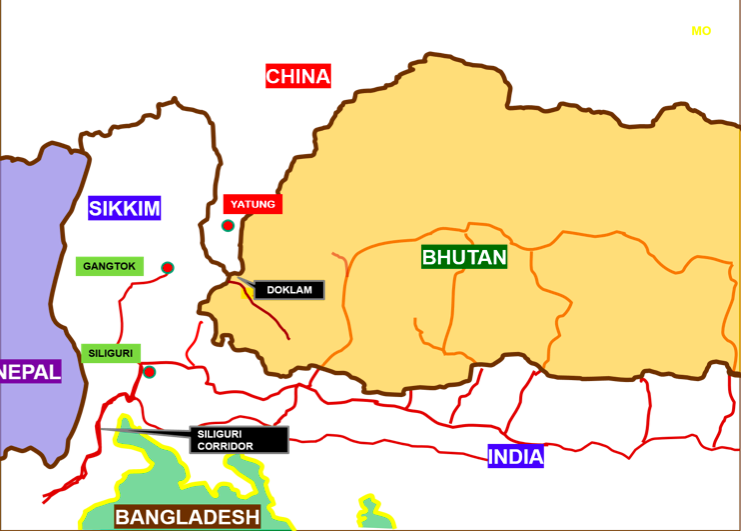 Face off at Doklam. Credit: The Wire

But with the number of Chinese soldiers being much greater, the Bhutanese soldiers were pushed back. In the meantime, Indian soldiers came down from Doko-La post “in coordination with the Royal Government of Bhutan”, the Indian government press release said.

By the time the Indian soldiers came down, the Bhutanese had gone out of the area and the security personnel of the two Asian giants found themselves in a face-to-face situation, which has continued till now.

The Indian and Chinese army are at a distance from each other, but close enough to have conversations. Indian army personnel informed the Chinese soldiers that they were trying to change the status quo, which was a violation of previous agreements.

It is learnt that there is disquiet in Indian official circles over the decision by certain Indian private television channels to repeatedly play old videos of Indian and Chinese soldiers jostling each other – videos which have no link to the current situation.

At ground zero of the present stand-off, both sides have apparently been calm and courteous, employing loud speakers and banners to put forward their point. In contrast, the tone was shrill in Beijing, with the Chinese foreign ministry and the PLA issuing almost daily statements over the past week. On Thursday, the Chinese PLA spokesperson even asked India to remember the “lessons of history” – referring to the 1962 war, in a reaction to an earlier statement of the Indian army chief Bipin Rawat on June 8.

Tension between India and China had clearly been building up since early June, when a Chinese patrol demolished a decade-old Indian bunker at Doko-la on June 6. However, this was not too alarming as the demolition of bunkers by patrol teams – moving in and out through the claimed areas – was rather routine.

Three days after the demolition of the bunker, Indian Prime Minister Narendra Modi and Chinese President Xi Jinping met in Astana on the sidelines of the Shanghai Cooperation Organisation summit. The discussions apparently gave the impression to the Indian delegation that both countries were on the same page with relation to the issue of border and the need to have a stable relationship in an uncertain world. Of course, the confrontation between the two armies in Bhutanese territory was not in consonance with the understanding reached at the leadership level in Kazakhstan.

Until Friday, the Indian side had remained silent. After the Bhutanese government lodged an official protest with China, New Delhi issued its first public statement a day later. The tone of the statement may have been measured but the Indian side is taking the latest development very, very seriously.

“The matter has been under discussion between India and China at the diplomatic level in the Foreign Ministries since then, both in New Delhi and Beijing.  It was also the subject of a border personnel meeting at Nathu La on June 20,” said the press release on “recent developments in [the] Doklam Area”.

It was at the June 20 meeting that China announced it would not allow the movement of Indian pilgrims for Kailash Mansarovar to go through the Nathu-la route. While three batches of pilgrims are currently cooling their heels, trade continues as normal at the Nathu-la border post.

Since China claims the Doklam area, the Chinese foreign ministry has alleged that when Indian soldiers traversed to confront their Chinese counterparts, New Delhi was violating the 1890 treaty between Great Britain and China which had settled the boundary in the Sikkim region. This is factually inaccurate, the Indian government asserts, as while the status of Sikkim within the Union of India is ‘settled’, the India-China border along the state has not been finalised.

“Where the boundary in the Sikkim sector is concerned, India and China had reached an understanding also in 2012 reconfirming their mutual agreement on the ‘basis of the alignment’. Further discussions regarding finalisation of the boundary have been taking place under the Special Representatives framework,” stated the Indian government communique. As per Indian maps, the state of Sikkim abuts Bhutan and therefore, the Indian army did not travel through any Chinese territory to reach Doklam.

There is understanding in New Delhi that the latest incident with China is substantially different from previous border stand-offs due to the involvement of Bhutan. In fact, the more sober tone adopted by New Delhi is also to give assurance to Thimpu and not trigger any alarmist moves.

On Thursday, Bhutan government has asked for the return to the status quo of June 16. The Chinese government has said that a condition for any meaningful dialogue on the current situation is that Indian troops withdraw from the area. However, communication channels between India and China remain open and the two sides are still talking to each other on how to bring the situation to normal.

It was premature to look at a trilateral dialogue between Indian, Bhutan and China on the tri-junction, since there is still no clarity on the shape of the possible solution. “India has consistently taken a positive approach to the settlement of its own boundary with China, along with the associated issue of the tri-junctions,” said the Indian statement.

It pointed out that peace and tranquillity on the India-China border has not come easily. “Both sides have worked hard to establish an institutional framework to discuss all issues to ensure peace and tranquillity in the India-China border areas.  India is committed to working with China to find a peaceful resolution of all issues in the border areas through dialogue,” said the press release of the Indian government.

Indian officials are not convinced that Modi’s visit to United States led the Chinese to up the ante, claiming that the road construction activity started 10 days earlier. So far, the Indian government has not yet taken a call on a possible meeting between Modi and Xi at the G-20 summit in Hamburg next week, but a quick pull-aside is not ruled out.